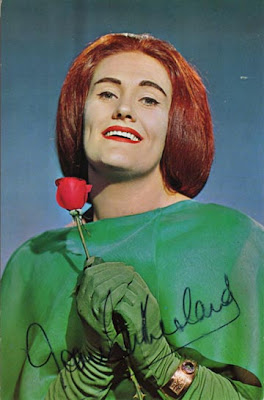 As you can see above, yesterday I was in London for the Service of thanksgiving For the life and work of Joan Sutherland – one of opera’s greatest voices and, I have to admit it, one of my personal lifelong obsessions. After seeing her perform on many indelibly memorable occasions, this was the last gig and, true to form, it was exciting, moving and also uniquely improbable.

There is nothing understated about Westminster Abbey – most English and then United Kingdom monarchs have been crowned here since 1066 and most of them, including Edward the Confessor, Henry V, Elizabeth I,  Mary, Edward VI,  Charles II and George II are buried here too. Elizabeth and Mary, rivals in life, are united here in death with their unlucky cousin, Mary Queen of Scots who, in Donizetti’s opera Maria Stuarda became the last operatic heroine that I saw Joan Sutherland perform.

Joan Sutherland, it has often been said was as straight-forward and “ordinary” a woman as she was extraordinary in her talents so I could not help but feel amazed that so many people were here in this momentous building so celebrate so unassuming a person.

Not only were we in the burial place of monarchs but the Abbey also has the graves of Chaucer, Purcell, Newton, Darwin, Dickens, Dr Johnson, Handel, Tennyson, Vaughan Williams, Gladstone and Pitt. In other words, we were sharing the space with the seriously great. 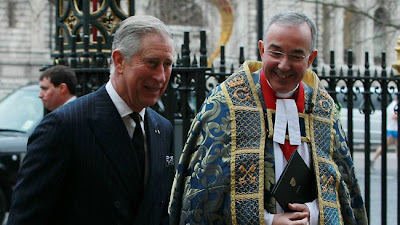 Prince Charles and the Dean of Westminister, Dr John Hall

There was plenty of pomp and circumstance,  from the clergy in their medieval copes to the Australian High Commissioner and the Prince of Wales in their city suits ….. 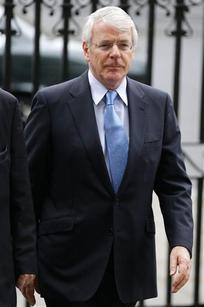 ….not to forget that greyest of men in grey suits, our former prime minister, John Major, who accompanied his wife Norma who wrote a rather dull Sutherland biography and, yesterday, read one of the lessons. The Westminster Abbey choir sang Byrd and Vaughan Williams gloriously and the Orchestra of the Royal Opera House, Covent Garden under its conductor, Antonio Pappano, played music from a Sutherland speciality, Handel’s opera, Alcina before the first moving incongruency raised the temperature when this most solemn of God’s houses echoed to the prelude to Verdi’s great opera about a fallen woman, La Traviata, another Sutherland triumph. Italian opera had released its earthly charm into this hallowed place and the vast congregation didn’t miss the significance.

In the end, for all the magnificence and dignity, it was two Sutherland recordings that, as in life, stopped the show when they were relayed on a hi-fi enthusiast’s dream of a sound system in this sensational accoustic. First Handel’s Let The Bright Seraphim from the album “The Art of the Prima Donna” stirred the emotions and brought many a glitter to the congregation’s eyes and then, what else, her limpid, technically perfect and exquisitely beautiful recording of Casta Diva from Bellini’s opera Norma.

Really, for all the dignity of the occasion, all we really needed was those two recordings in that glorious Gothic abbey. Perfection.

It was a very special moment, it felt as if the great singer was amongst us one last time. it has been said many times, I know, but we will never hear her like again.

Then it was time to leave, the sadly lonely figure of Sutherland’s widower and musical inspirer, Richard Bonynge walked down the nave on his own after the clergy and the royal party and then, I had to smile,  the grandchildren and other relatives followed behind and some of them bore the unmissable facial features, including that most determined of jaw lines, of the great lady herself. Immortality comes in many ways.

It was a lovely final touch to leave the abbey to the sound of the bells ringing in Sutherland’s honour.

…and just as it was impossible to expel the smell of greasepaint from the Abbey, so is it important to remember this great artist in life, on stage in the opera house where she belonged. Here she is way back in the early 1960’s in an American telecast of her singing the ferociously and excitingly difficult last act aria from Bellini’s I Puritani.