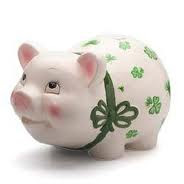 The Irish piggy bank is empty

I have never been any good at money. I am not proud of this but at least I am being honest here. I find numbers difficult as I have written here before and often even my telephone number evaporates from my mind just when I need to recall it. So that wonderful country, Ireland, has all my sympathy as it struggles with its nightmare economic problems.

It is amazing stuff even for my numerically challenged brain. Put simply, and that is all I can muster at the best of times, Ireland is 75 billion Euros (£63.5 billion)  in debt which amounts to 94% of its national output. It is over-borrowing on your pocket money gone ballistic. I can remember those horrible cold sweats when I realized that I had bought something that I couldn’t afford and that terrible bank statement spelt out just how bad I had been just when I was hoping that no one would find out. Brian Cowen looking as sick as a parrot

No wonder then that Brian “Biffy” Cowen looks so sick these days. He is the Irish Taoiseach (Prime Minister) and he must be having one of my cold sweat attacks because he, just like me at my worst, has been a very naughty boy and broken all the rules set by grim financial misery-guts. The European Union, which had always been such good news for small countries like Ireland, Portugal and Greece, has turned strict and nasty all of a sudden.

Well, rules are rules, I suppose. no country is allowed to have a deficit of more than 3% of its Gross Domestic Product (GDP)  – which means the money it makes – but Ireland has built up a deficit of 32%. Oh Brian, you will get smacked legs at the very least. Unlike some of my problems though he is being offered  money to make his worries go away. Lots of European money has gone to help Ireland over the years and it has been the making of a country which appears to have gone spend spend spend mad. The trouble is, like any pact with the devil, the European Union is demanding a price but suddenly, Mr Cowen is trying to avoid the inevitable. He is saying he doesn’t want a big dollop of European dosh to bail Ireland out of its debts. Why the Hell not Brian? It is free money isn’t it? The trouble is that there is no such thing as a free lunch. He thinks, but can’t say it, that getting his debts paid off might just make him look a bit of a pillock and not only has he got some elections coming up but he thinks that Angela Merkel of Germany and Nicolas Sarkozy of France,  the big bad guys of Europe, would use the money offer as a way of forcing him to do terrible things like raising taxes or to generally whatever they tell him to do…they know that they have a firm grip on his bollocks and they like the feeling. 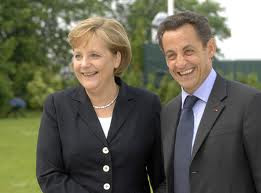 Angela Merkel and Nicolas Sarkozy having a laugh

Across Europe, politicians and bankers want Ireland to take the money but Brian Cowen is saying he doesn’t need it and that everything is under control. Trust me, he says, I am a politician. I wonder who will be the next Irish Taoiseach.