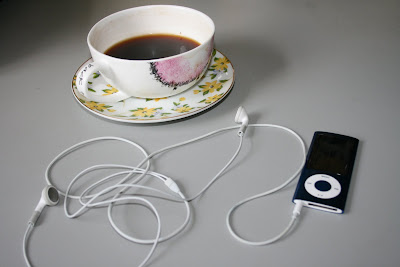 Yes, I know I have my iPod nano and it is a wonderful piece of gear. I listen to it in the street, on the train, at the gym and I took it away with me on holiday and sat listening to Mahler on a Greek island – it is here now on my desk tempting me with its possibilities.

At the moment I have been playing R.E.M.s mavellously electric guitar based album Monster which I first got to know sitting on a hotel balcony in Richmond Virginia when it first came out. I was using what seemed to me at the time another wonderful piece of gear, my first and only Sony Discman. Now whenever I hear this album, I am transported to a Virginian high summer and an edgy American city which matches the music quite perfectly.

I am having a party on Friday and, to prove that I am no old fogey as far as music is concerned, I will use my iPod for the party music and I will shuffle my way through my albums hoping that Mahler Three doesn’t emerge unexpectedly.

So it is great downloading songs from the internet, playing them on my iPod and disgarding anything that disappoints. Here I am totally at one with the new age but……..

I have been listening to one of my favourite operas, Verdi’s Don Carlo or Don Carlos depending on which language version I happen to be playing. On my chronological progress through the history of classical music, I have reached 1868 but I have stayed stuck in 1866 as far as this opera is concerned.

I have owned and played the great Carlo Maria Giulini recording (EMI 7243 5 56152 2 0 ) on vinyl and on cd and went straight to it as soon as my strict regime allowed it. It was great to discover that I loved it just as much as I always have even after such a long time away. As the project has now been running for twelve years, I am really missing some of my late Nineteenth Century favourites to say nothing about all that exciting music from the beginning of the Twentieth Century.

I had been preparing myself for this moment. Reading Julian Budden’s definitive books on the Verdi operas (The Operas of Verdi by Julian Budden, three volumes Published by Clarendon Paperbacks, Reprinted 2002) and the powerful original play by Schiller (Don Carlos by Friedrich Schiller in a new version by Mike Poulton, Nick Hern Books, 2005) and I had also ordered the cds of Verdi’s excellent original French version of the opera in the recording by Antonio Pappano (EMI 7243 5 67401 2 9 ).

Volume Three of the Julian Budden book arrived last week after I had ordered a secondhand copy over the internet. My excitement at the thought of this next installment of Budden’s magisterial account of these great operas was slightly diminished by the discovery that the first seven pages had been ripped out. I kept my patience however, wrote a complaining email and got my money back. Impressed by my own self-control, I looked up those seven pages in the library. 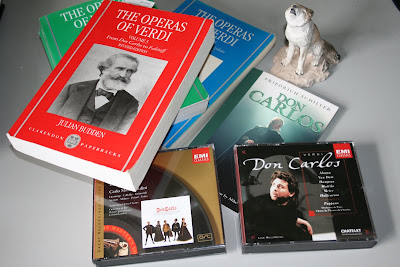 So, as you can see, I was taking this seriously. I have seen several productions of this opera at the Royal Opera House, Covent Garden over the years including, most memorably a classic performance by the sensational Russian bass Boris Christoff as the troubled King Philip the Second with the then vocally flawless Gwyneth Jones as Elizabetta.

I have known it and loved it in its five act Italian version for all of my adult life but I had never got round to listening to it in its original French as Verdi first conceived it for its premiere at the Paris Opera in 1866. In one stroke, this Italian genius wrote the greatest of all French grand operas and I have always wanted to hear it.

So this was the time if there ever was to be a moment in life when I could sit down and study this quite amazing piece with its marriage of politics, religion and passion portrayed by some of Verdi’s most psychologically complex characters.

I had ordered the box set of cds from America and they were sitting in my study awaiting this long expected moment.

That time finally arrived last week, so I sat down with my nicely brassy hi-fi system, pressed the remote button and the music began. For all the joys of my iPod, there is nothing quite like sitting back in a room with a good acoustic listening to epic music on an impressively sonorous sound system – call me old-fashioned if you will.

All was well until the end of the first cd when an ominous click turned into a sound jump and then aural chaos. Thanks American CD company – you sent me a bummer! My first attack of hi-fi rage got worse as I tried all known ways of removing the scratches from the surface of the cd. Each time, there was a moment of hope followed by the same disaster. I left the whole thing and walked away.

I went back the other day, thinking passive thoughts about wanting to hear the rest of the opera and at least the other two cds were probably fine.

So I sat down again, carrying on where I had left off and the room filled with sound. 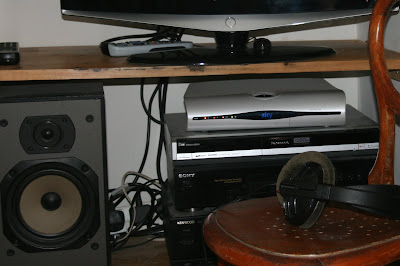 Then there was a bit less sound and then a few crackles and my amplifier decided to have one of its intermittent faults. Usually the odd kick, shake and a bout of cable fiddling does the trick but not that day. Grand Opera on half cock is just not my thing so the hi-fi rage returned with more vengeance than Verdi’s Grand Inquisitor. Fifteen years of this technician-defying fault finally decided me on ruthless action. I would replace my amplifier and not listen to any music until the system was working again. Well, no music apart form R.E.M on my i-Pod that is.

And here it is, my new piece of equipment, it arrived this morning, bought on-line via E-Bay, my new, well secondhand, Kenwood 3020 Second Edition integrated amplifier. It is sitting in the hall but I am not sure if my hi-fi rage has subsided enough for me to risk opening and installing it. What if it doesn’t work? Could I be sure that I would not act like a pampered, drug-crazed rock star, and throw the whole system out of my window onto the street below? 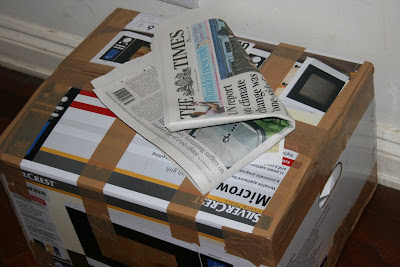 Maybe I should just move on, download it onto my iPod but, no, Verdi’s opera has a powerful draw and it needs that acoustic punch. I think I will go and plug in the new amp, see you all later.