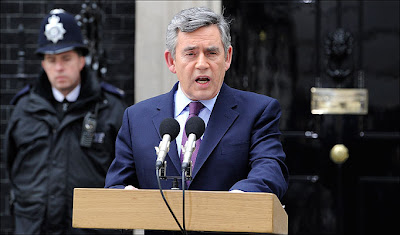 Us being the people of the United Kingdom I mean, not us that great band of wolfiewolfgang.com readers who cross all national boundaries and most other superficial classifications too.

We often over-estimate our importance to the rest of the World as was seen this week when the British press and a number of politicians were bleating about the Hung Parliament saying that it had to be resolved in five minutes because of the financial markets which were wobbling.

Amazingly, as I suspect all of of us knew, it was nothing to do with us, it was all about the Greece economic crisis. When Europe acted to put together a financial package, the markets steadied even though Britain hadn’t been panicked into sorting out its election results. It has wobbled again this morning but rallied slightly too at the thought that there might be a Liberal-Labour coalition but it will sort itself out so let us remember that it was the markets who got us into our financial woes in the first place.

There was an opinion poll taken on the day after the General Election where 60% of the sample said that Gordon Brown should have resigned immediately because his party had lost the election.

Well, this position was as ill-thought through as the markets argument.

Gordon Brown would have left the country without a Prime Minister if he had gone last Friday and it gave me a nasty shudder to realize, after all the coverage of this unprecedented moment in our electoral system, that so many people in Britain could just simply not understand what is really going on.

No matter what party you support, or if you support none of them, there was no way that Gordon Brown disappearing last week would have been a good thing for the country. His announced resignation yesterday, on the other hand was considered and dignified. He has opened up the possibility of an alternative coalition to the Liberal-Conservative one and he has strengthened Mr. Clegg’s negotiating hand.

This petulant rushing into change just for the sake of it is a dangerous thing for the British newspapers to be fanning. Our politicians should not be hurtled into a quick fix when there are big issues to be discussed.

Mr Brown certainly did lose the election but so did Mr Cameron and, weirdly, in case you hadn’t noticed, so did Mr. Clegg. So did the Scottish Nationalists and Plaid Cymru too…..etc. etc.

No one party could govern alone so an agreement has to be had or we will have to hold another General Election. That, of course, would be unfortunate too at this time of financial crisis.

There is a majority of people in Britain who did not vote Conservative and there are not enough Conservative MPs to carry their legislation through Parliament so it is perfectly proper for us to look for the best and most stable combinations of elected MPs who can agree on enough principles to form a government. Let us let them sort this one out at a considered pace. It is, and would be if we change the electoral system, a perfectly normal way, and maybe a more intelligent way too, of sorting out who runs the country.

The newspapers are also blustering about Mr Brown’s resignation leaving the country with the possibility of another unelected Prime Minister. This would undoubtedly be true if the rather impressive (well he impresses Hilary Clinton) David Miliband becomes Labour Leader in a dynamic new relationship with the equally charming and impressive Nick Clegg. Let us not think that it is unusual though to have a Prime Minister who was not directly elected…..just looking back at previous Prime Ministers this was also true of Winston Churchill, Anthony Eden, Harold Macmillan, Alec Douglas-Home and James Callaghan.

We have to be careful and realize that there seems to be a natural divide in Britain at the moment. On one side is the Conservative Party and most of the national press and on the other side the majority of the electorate so, hey, don’t start giving up the struggle just because the newspapers tell you to.

So I make a plea to the British Press and its more gullible readers, let us all have a bit of patience and let the politicians thrash this out in a mature and responsible way. We had the TV debates, the exciting TV election coverage but this is not Big Brother or the X Factor, this is the governance of Britain.