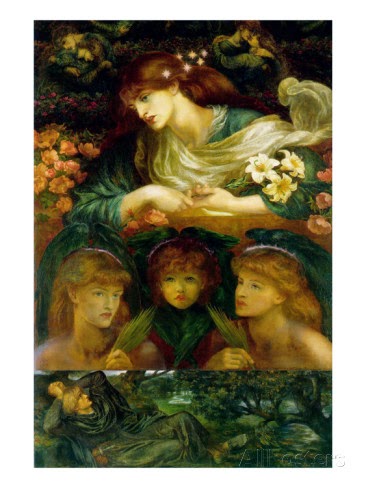 The Blessed Damozel (1875 – 1878) by Dante Gabriel Rossetti
I have written before on this site about my enthusiasm for the so-called Pre-Raphaelite artists, my favourites being Edward Burne-Jones (1833 – 1898) and Dante Gabriel Rossetti (1828 – 1882) but last week I was drawn back to their particular charm when I started to listen to a piece of music, previously unknown to me, by the French composer Claude Debussy (1862 – 1918),  La Damoiselle élue (1887/88), a setting of the youthful Rossetti’s poem The Blessed Damozel (1850 with several revisions until 1873). Rossetti himself had been obsessed by his poem throughout his life and, in the 1870s, revisited the theme for one of his best known paintings, also called, The Blessed Damozel.  How wonderful, I thought, that this poem should also have a life as a painting and as a gloriously beautiful piece of music – the young Debussy’s first truly characteristic composition. 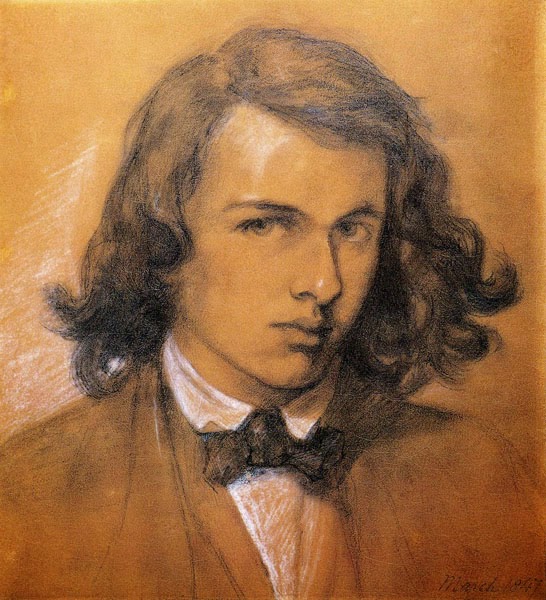 The poem, apparently famous, was new to me and I was immediately drawn to its theme of the, now dead, beautiful love-lorn maiden leaning over the balcony of Heaven hoping that her lover will join her up there where they could continue their very physical relationship. It is a headily exotic piece of mystical eroticism, one of the Pre-Raphaelites classic themes. The young Rossetti is the bereaved young man witnessing what seems like an erotic and slightly irreligious dream of his lost love. This young man’s fantasy drew the piece to the testosterone-charged Claude Debussy who was in his mid-twenties when he wrote his music.   Here are two excepts from the poem to give you some idea of what I mean.

by Dante Gabriel RossettiThe blessed damozel lean’d out
From the gold bar of Heaven;
Her eyes were deeper than the depth
Of waters still’d at even;
She had three lilies in her hand,
And the stars in her hair were seven.Her robe, ungirt from clasp to hem,
No wrought flowers did adorn,The Blessed
But a white rose of Mary’s gift,
For service meetly worn;
Her hair that lay along her back
Was yellow like ripe corn.

Around her, lovers, newly met
‘Mid deathless love’s acclaims,
Spoke evermore among themselves
Their heart-remember’d names;
And the souls mounting up to God
Went by her like thin flames.

And still she bow’d herself and stoop’d
Out of the circling charm;
Until her bosom must have made
The bar she lean’d on warm,
And the lilies lay as if asleep
Along her bended arm. 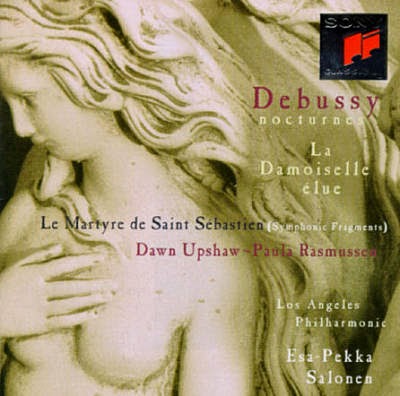 I was, of course,  pursuing my slightly obsessive journey through the history of classical music in chronological order from the year 1100 onwards (begun fifteen years ago) and now reaching the year 1887.  Listening to Debussy’s first musical masterpiece, La Damoiselle élue (1887/88), opened my ears to a new era and, maybe for the first time on this project, showed me the dawning of the 20th Century. I have tried over the years to block out memories of any music written after the date currently studied but now that I’m nearing the end of the line (I’m finishing in 1897 with the death of Johannes Brahms), I can’t help but hear how Debussy would flower into one of the early geniuses of ‘modern’ music. It was also a thrilling return to one of my favourite composers, long missed over the 15 years. If you want to see what I mean, you can hear an except from the piece at the bottom of this page,taken from the inspiring CD with Esa Pekka Salonen conducting the Los Angeles Philharmonic. I can’t stop playing it. It’s true that you can hear the influence of Richard Wagner (1813 – 1883)  and, one of Debussy’s teachers, Cesar Franck (1822 – 1890), as well as sweetly sensuous echoes of music of Jules Massenet (1842 – 1912), especially his opera, Manon (1884), but the intangibly physical mysticism, and the pure sexiness of Debussy’s later work is already here. No wonder his conservatoire teachers warned him “He should be beware of this vague Impressionism which is one of the most dangerous enemies of artistic truth.” How right they were without realising it. 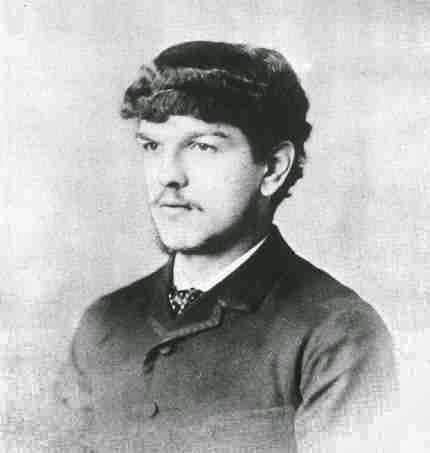 So I have reached the year 1887 and I can feel the earth shift beneath my feet. There are new kids on the block and there’s no denying that this new generation of composers, learning from the past, would change the future of music. Until now, I hadn’t realised that three composers, in particular, all born within a couple of years of each other, formed, almost single-handedly, the voice of the next great period of classical music. They were, of course, Claude Debussy (1862 – 1918), Gustav Mahler (1860  – 1911) and Richard Strauss (1864 – 1949). My listening list for 1887 – 1888 included not only Debussy’s first masterpiece but also Strauss’ first symphonic poem, the wonderfully confident Aus Italien, and Mahler’s exciting Symphony No. 1. Hang onto your seats, music lovers, it’s going to be a bumpy ride. 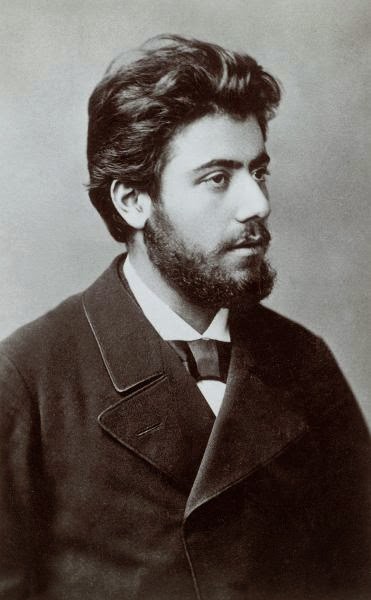 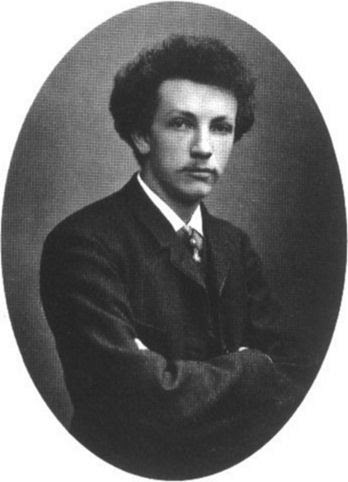 So one young man’s poem led me to the work of three more young men but from a very different era – thank you Dante Gabriel Rossetti for your own work but also for inspiring this young French maverick to invent his own way forward. When still a student, he was rebuked for disregarding time honoured compositional traditions. ‘What rule do you follow?’ asked the bemused conservatoire Registrar. ‘My pleasure,’ young Claude replied. It has become our pleasure too. Here is the opening of La Damoiselle élue. Something for the weekend, I suggest.