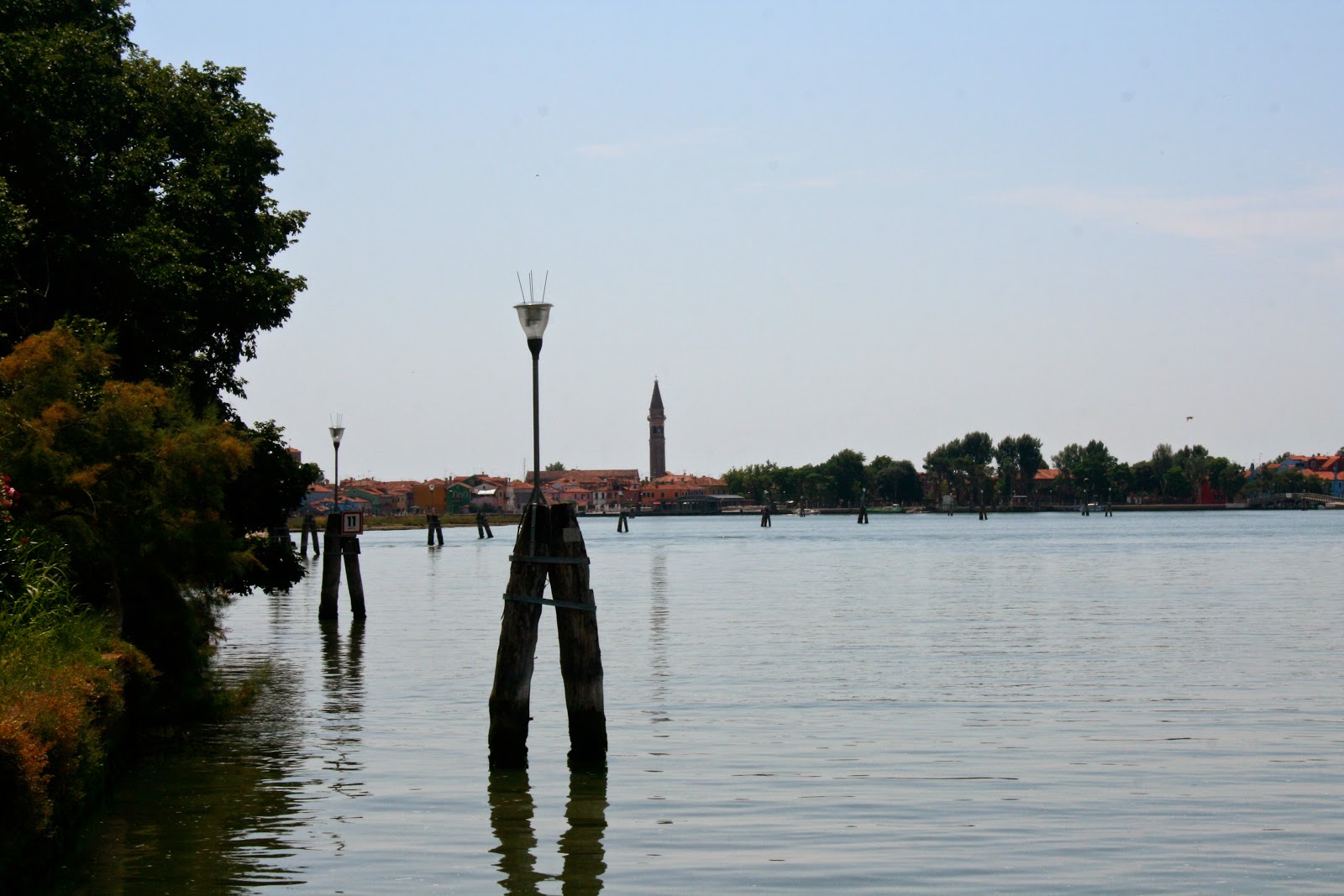 I wasn’t sure what to expect when the boat approached the little Venetian island of Burano during my recent two week break in Venice. When we got close, I was amazed by the psychedelic colours mixed together in the most kaleidoscopic town I have ever seen. 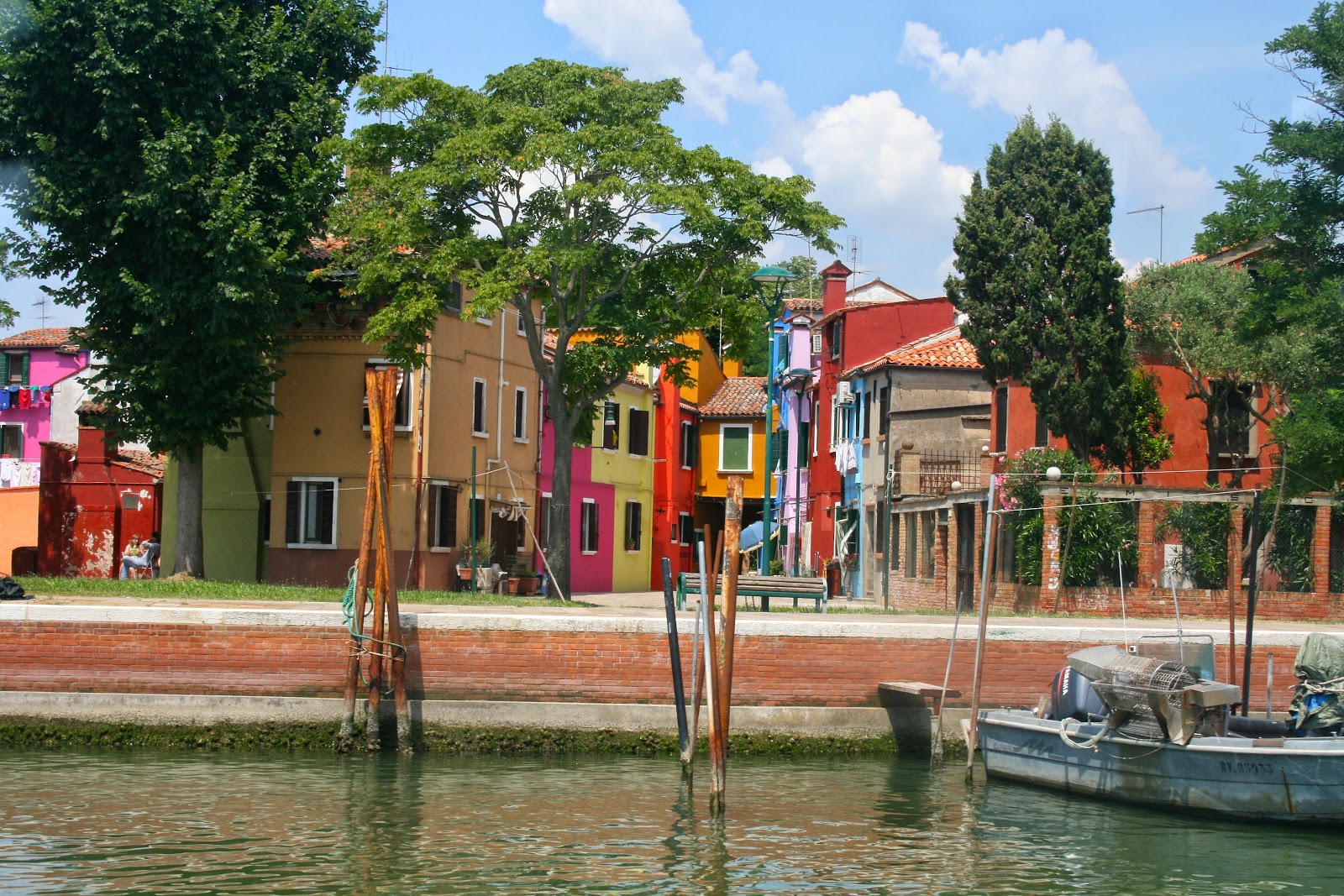 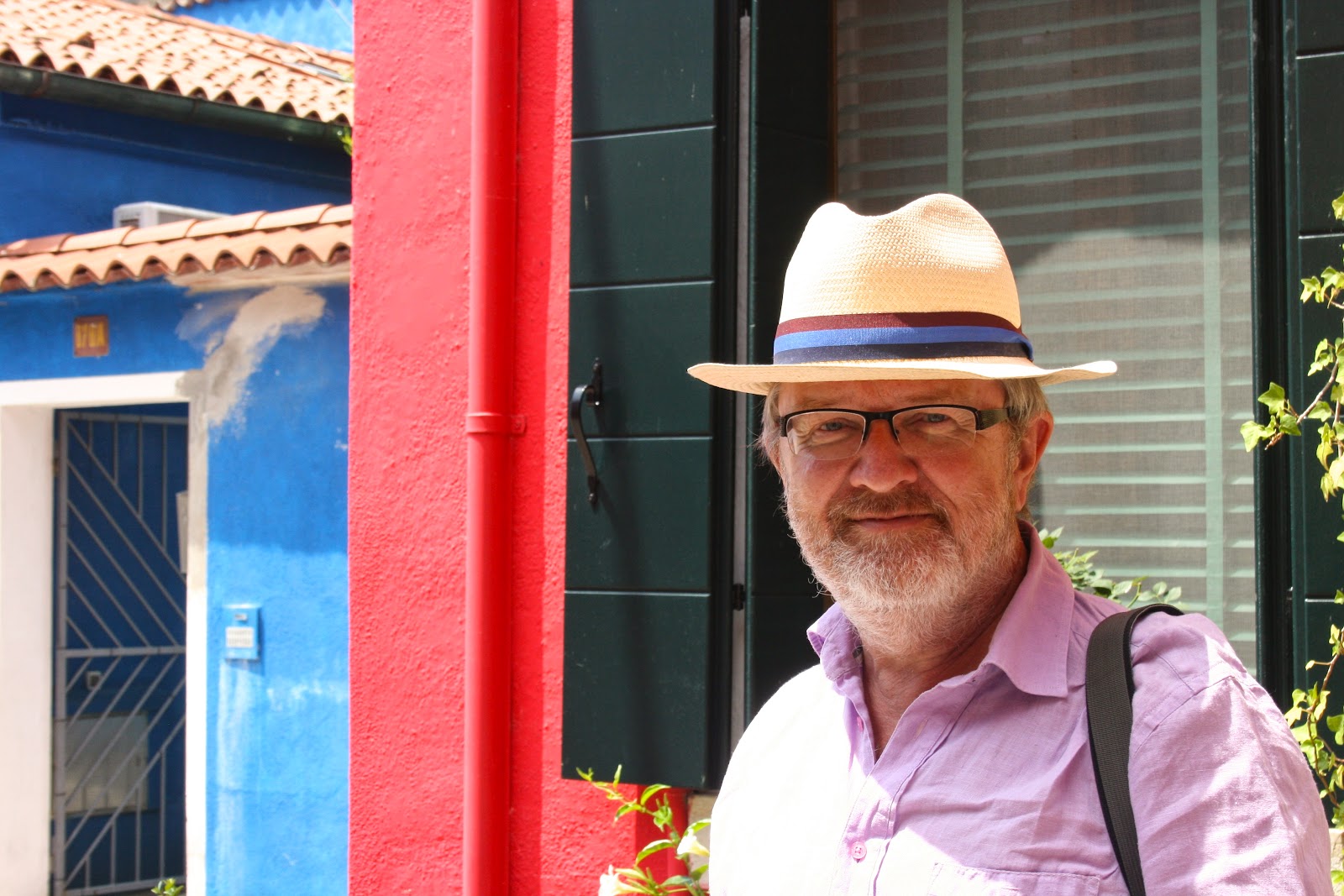 Any minute now, I thought, Enid Blyton’s Noddy and Big Ears would come round the corner and Pinocchio would come running along the canal banks. You can’t really feel sad here. 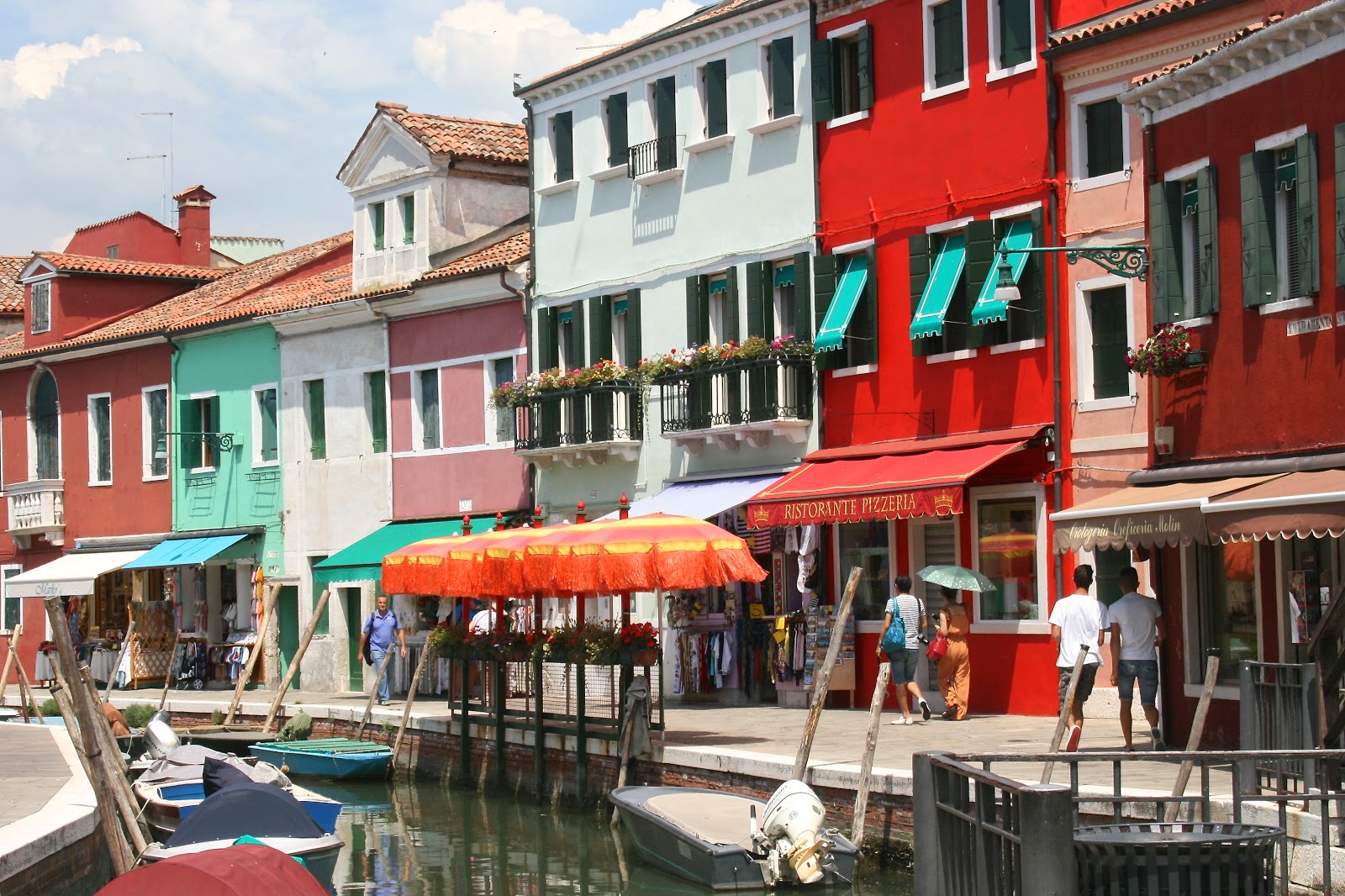 I even smiled when I was shown  this Buranese woman who was happy to pose for the cameras while doing her nimble finger-work with lace. Burano, I’m told, is famous for its lace. Well, I wasn’t too bothered about that but she seemed to be enjoying herself. 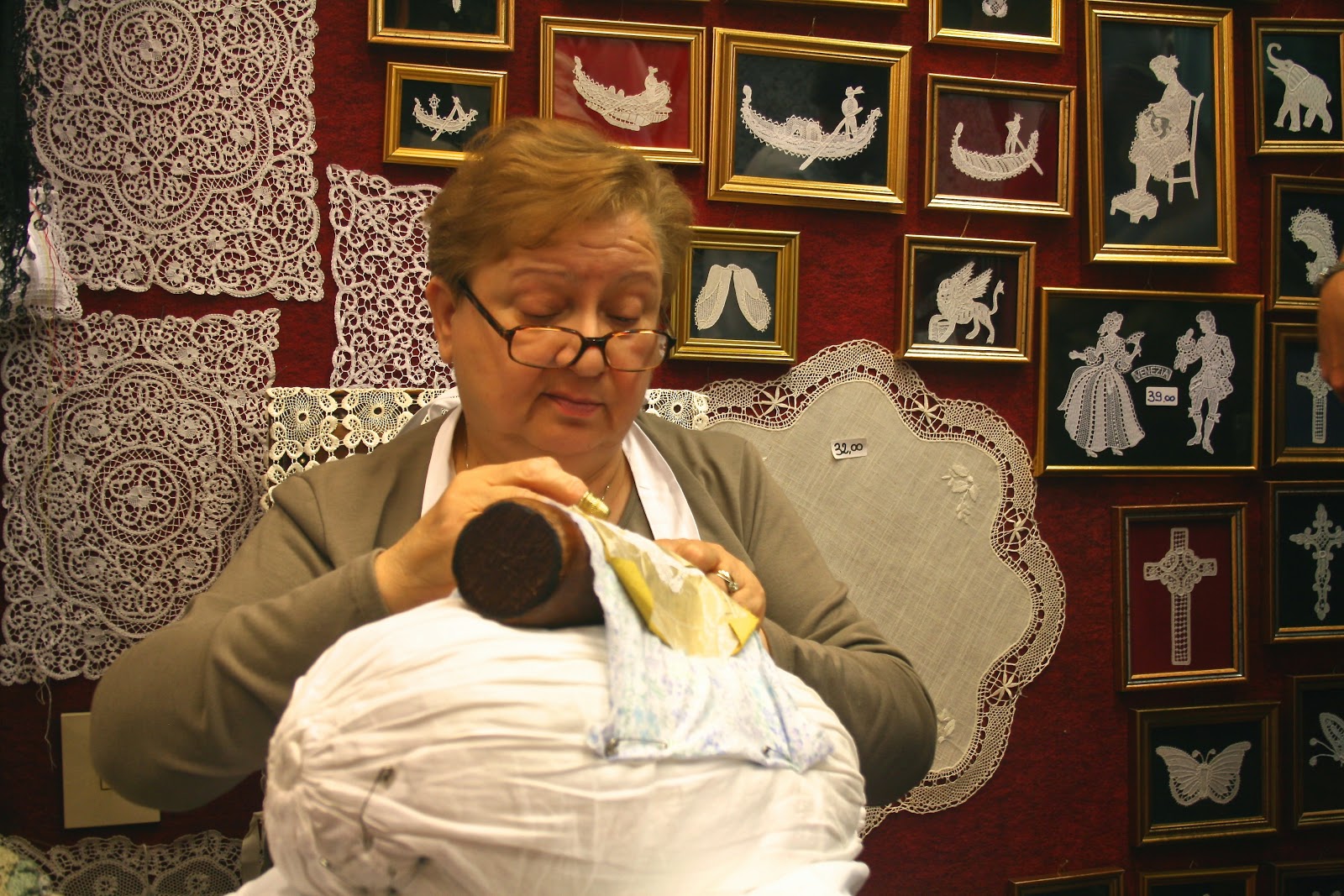 I was happier just wandering round the little streets playing a guessing game on which one would have the zaniest combinations of colour. 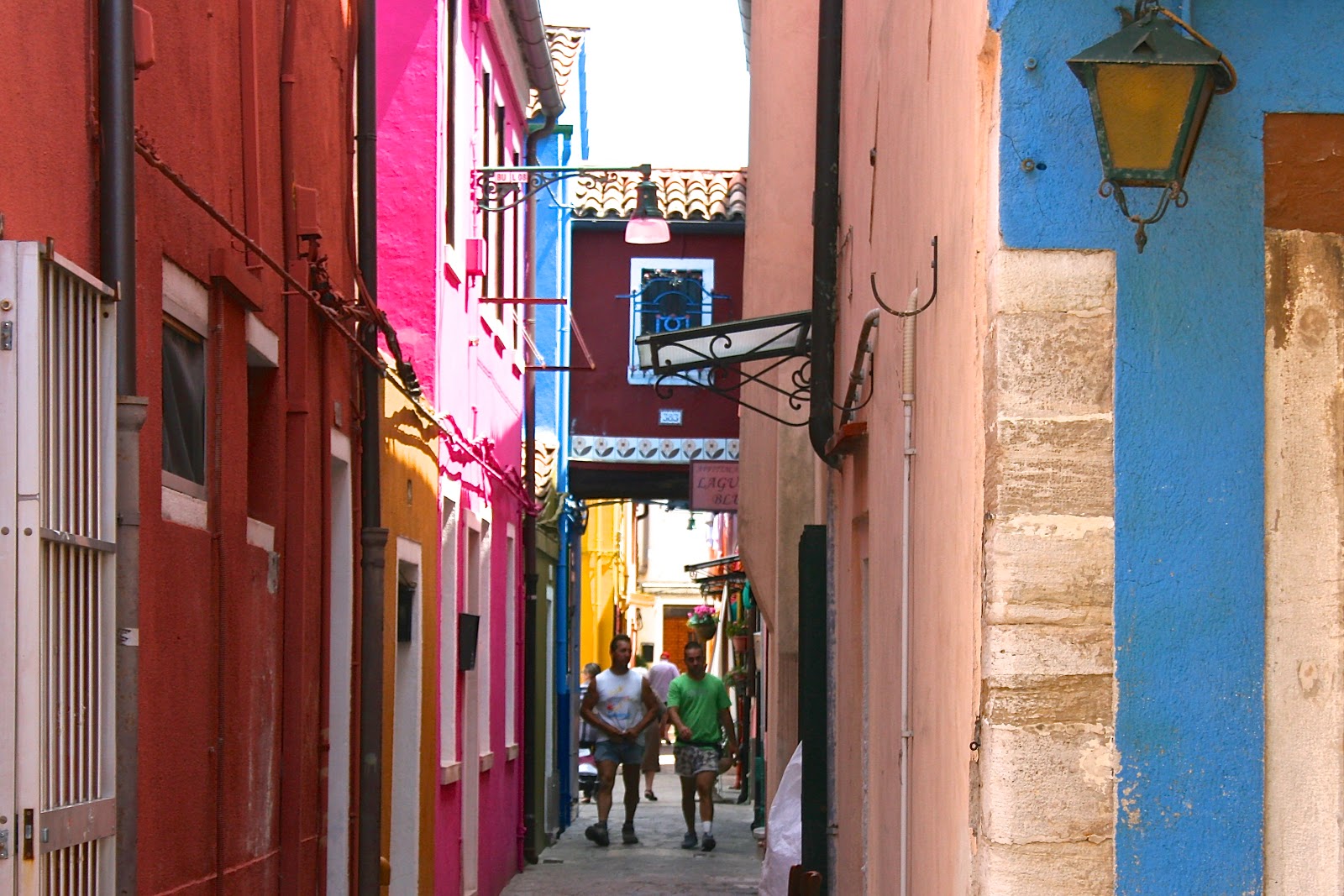 Some historians think that this colour scheme originated in Ancient Rome and was imported here when the Romans fled from one of those many occasions when marauding Northern Europeans marched in to sack Rome itself. 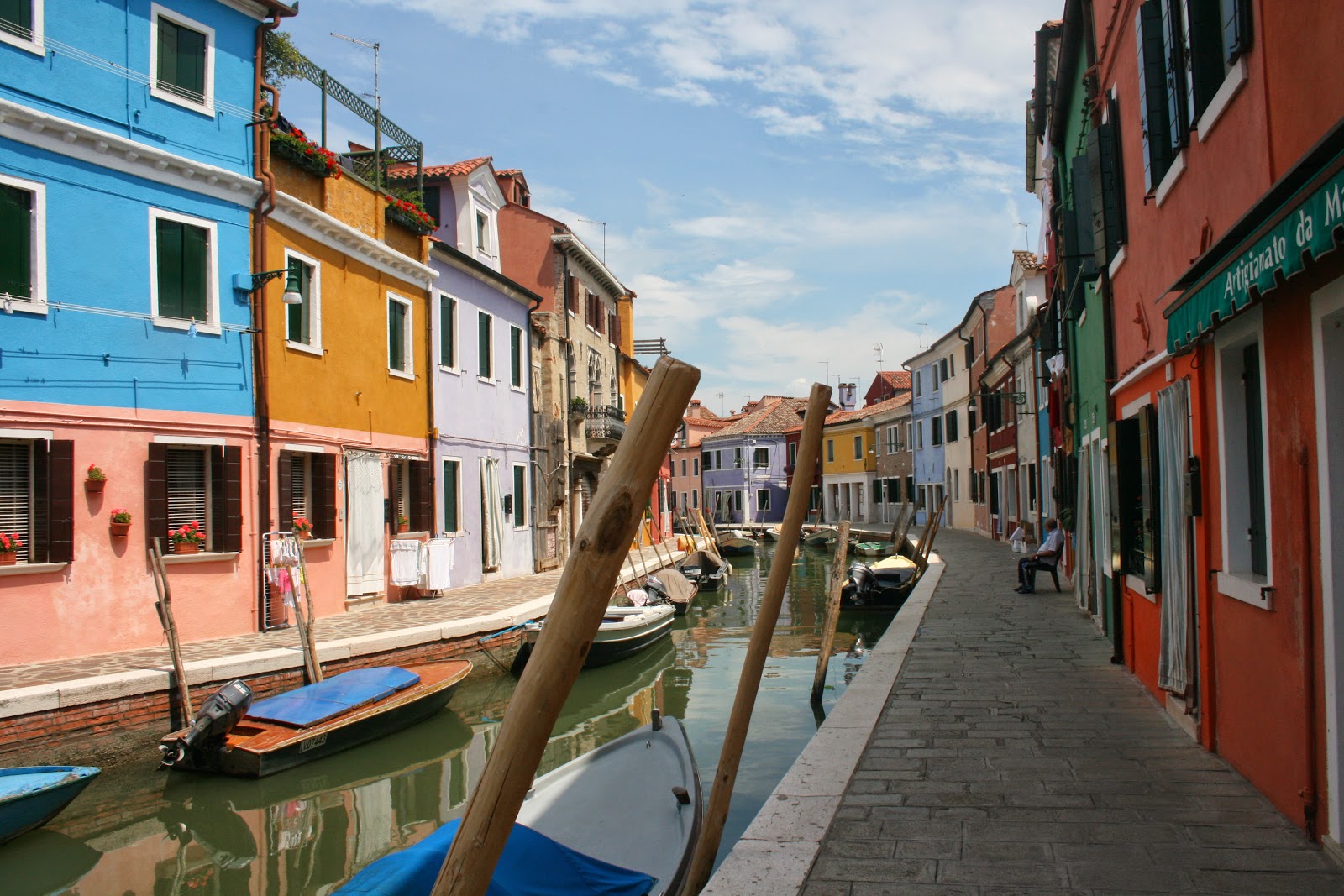 We seemed a long way away from marauding barbarians here in Burano and, anyway, even if I felt like marauding, it was really much too hot that day. 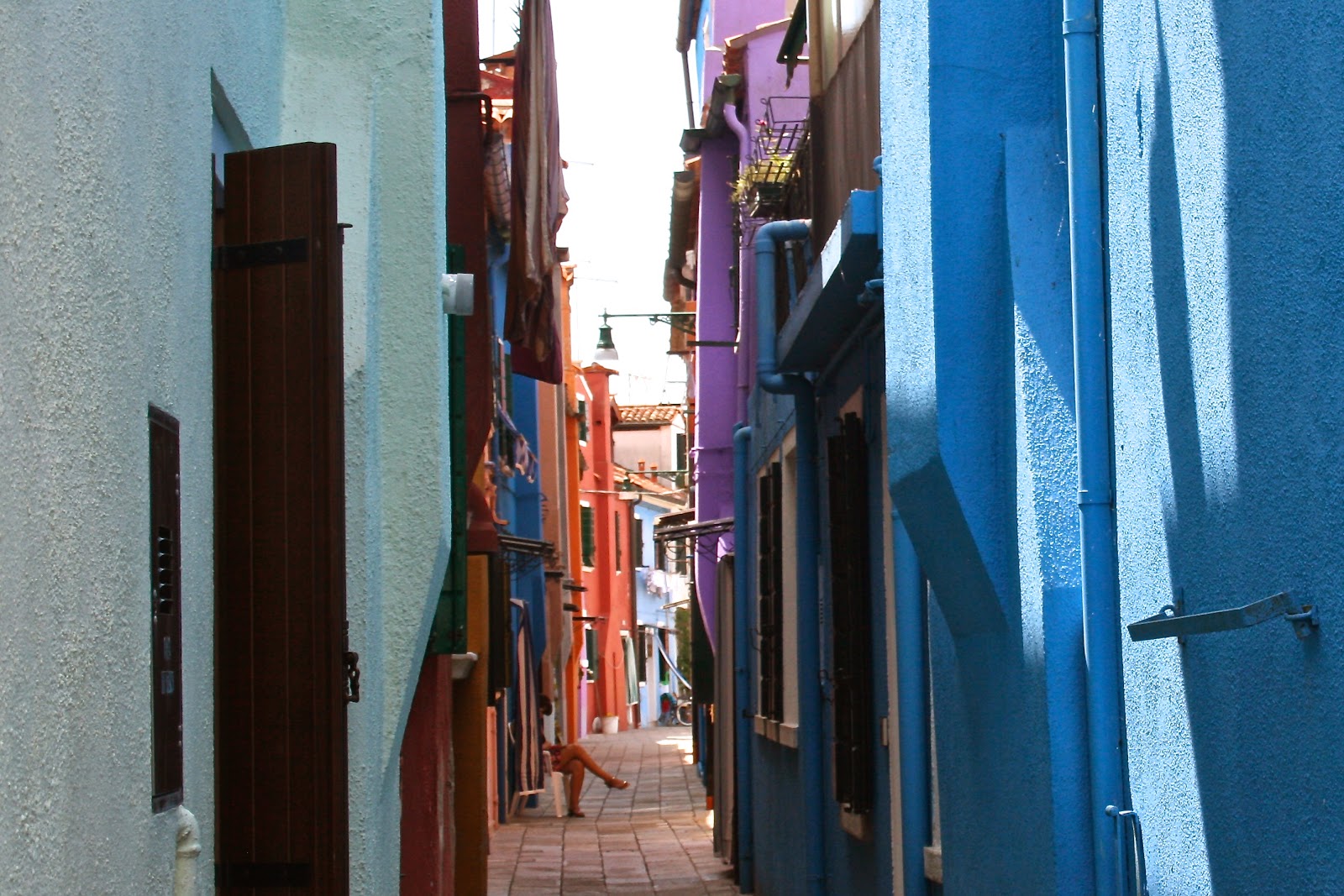 If Rome really was painted in these colours, it might well have ben a much jollier place than I had imagined. 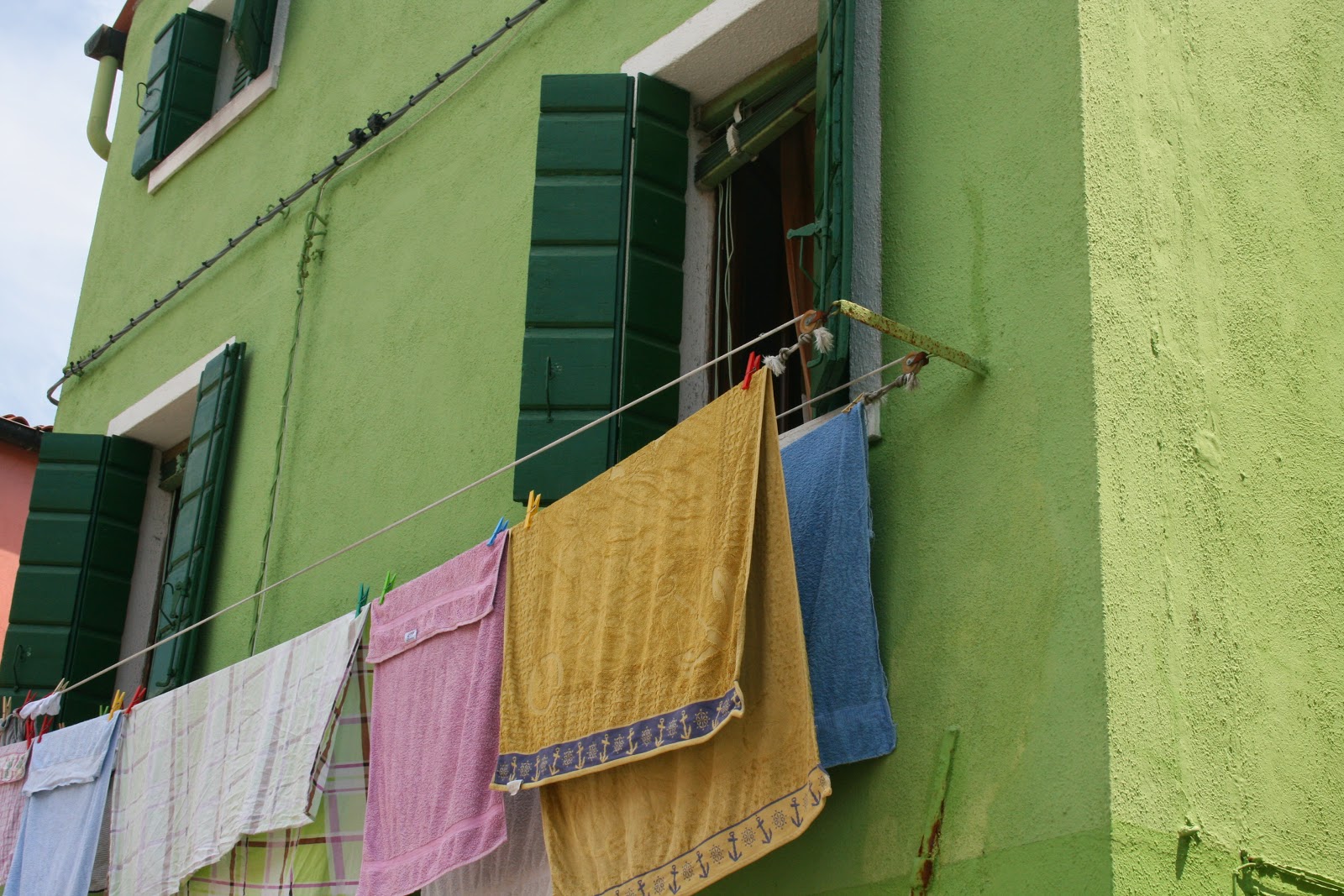 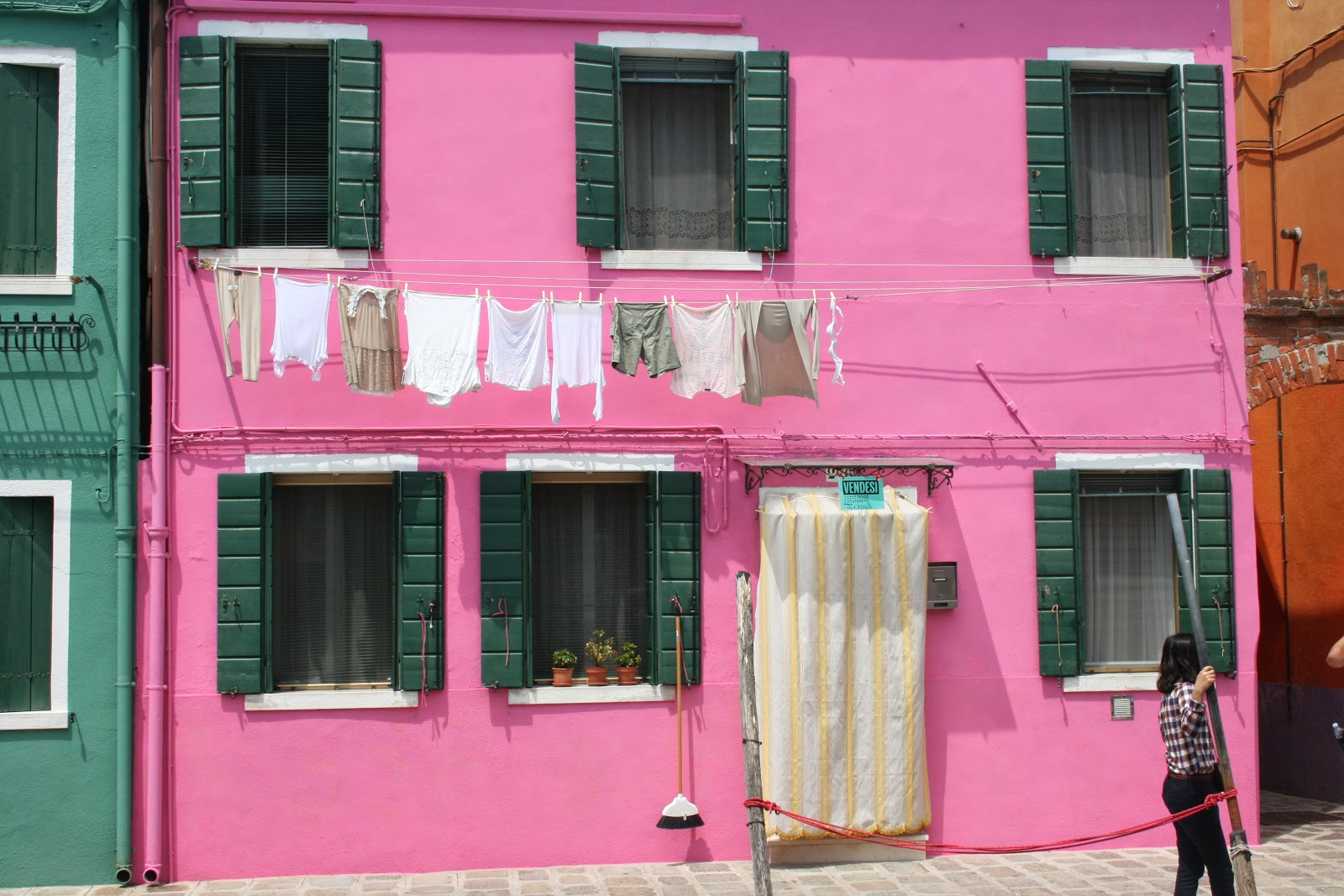 … this woman appeared to be making a statement in beige – very tasteful, signora. 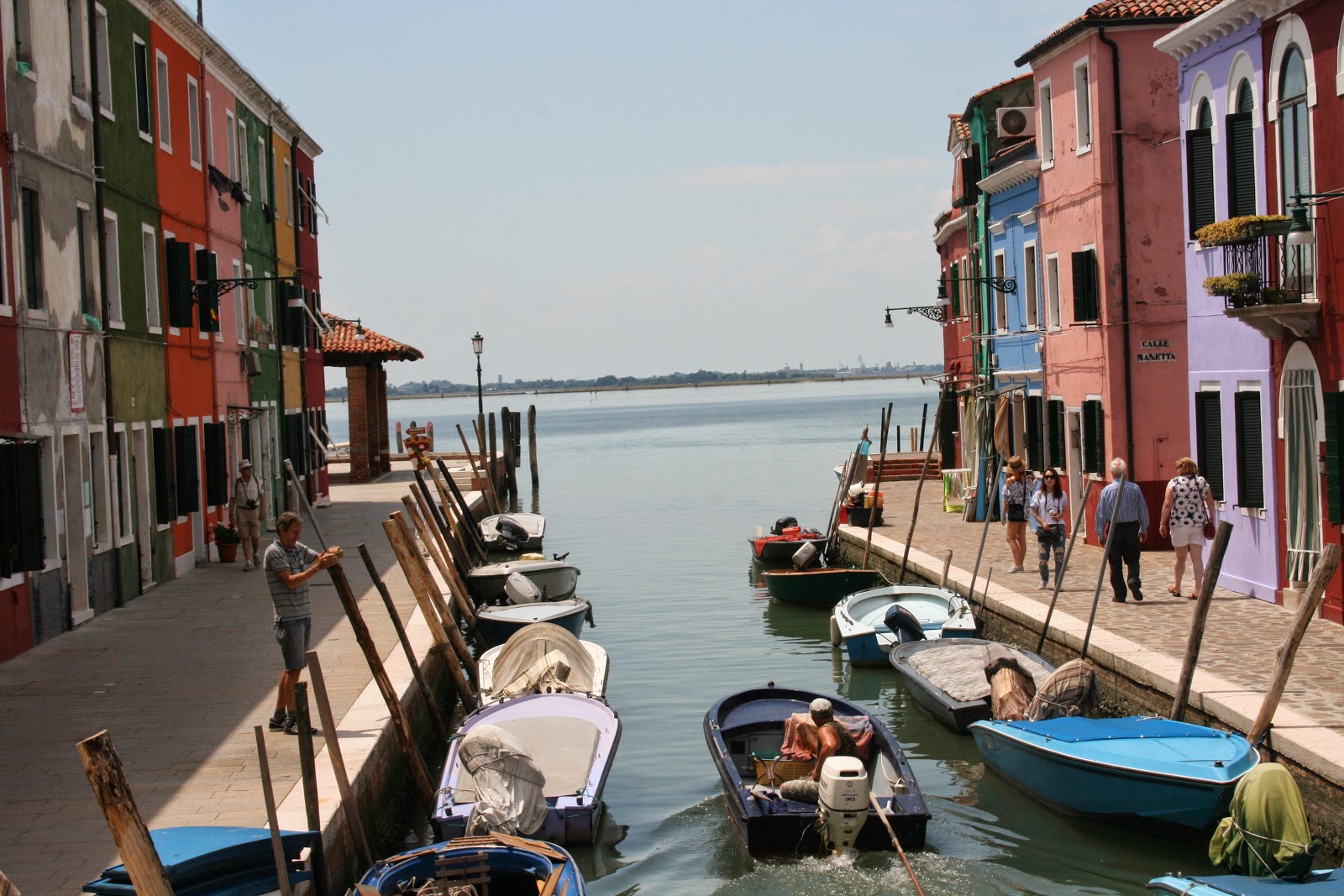 Burano is fun – as camp as any fishing village I have seen – no wonder it’s most famous son was the 18th Century composer Baldassare Galuppi (1706 – 1785), famous in his day for his operas, some of which were collaborations with the Venetian playwright Carlo Goldoni (1707 – 1793) – his success made him a star in his lifetime and leading to him becoming, along with Vivaldi, the most famous Venetian composer of the 18th Century invited to Russian by Catherine the Great and to London by all those English Italian opera fans. 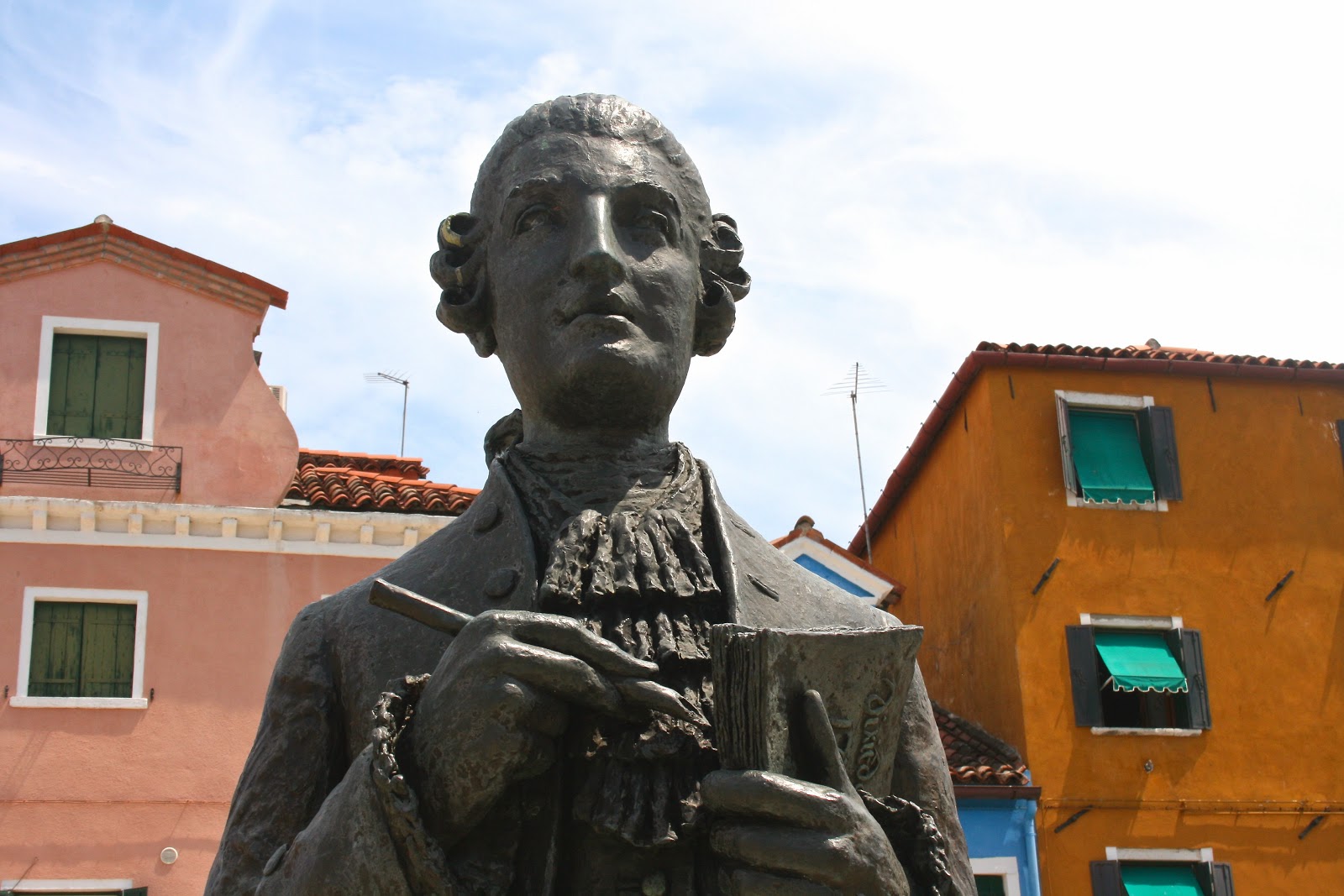 Burano have named the main square after him and a very jolly place it is too. 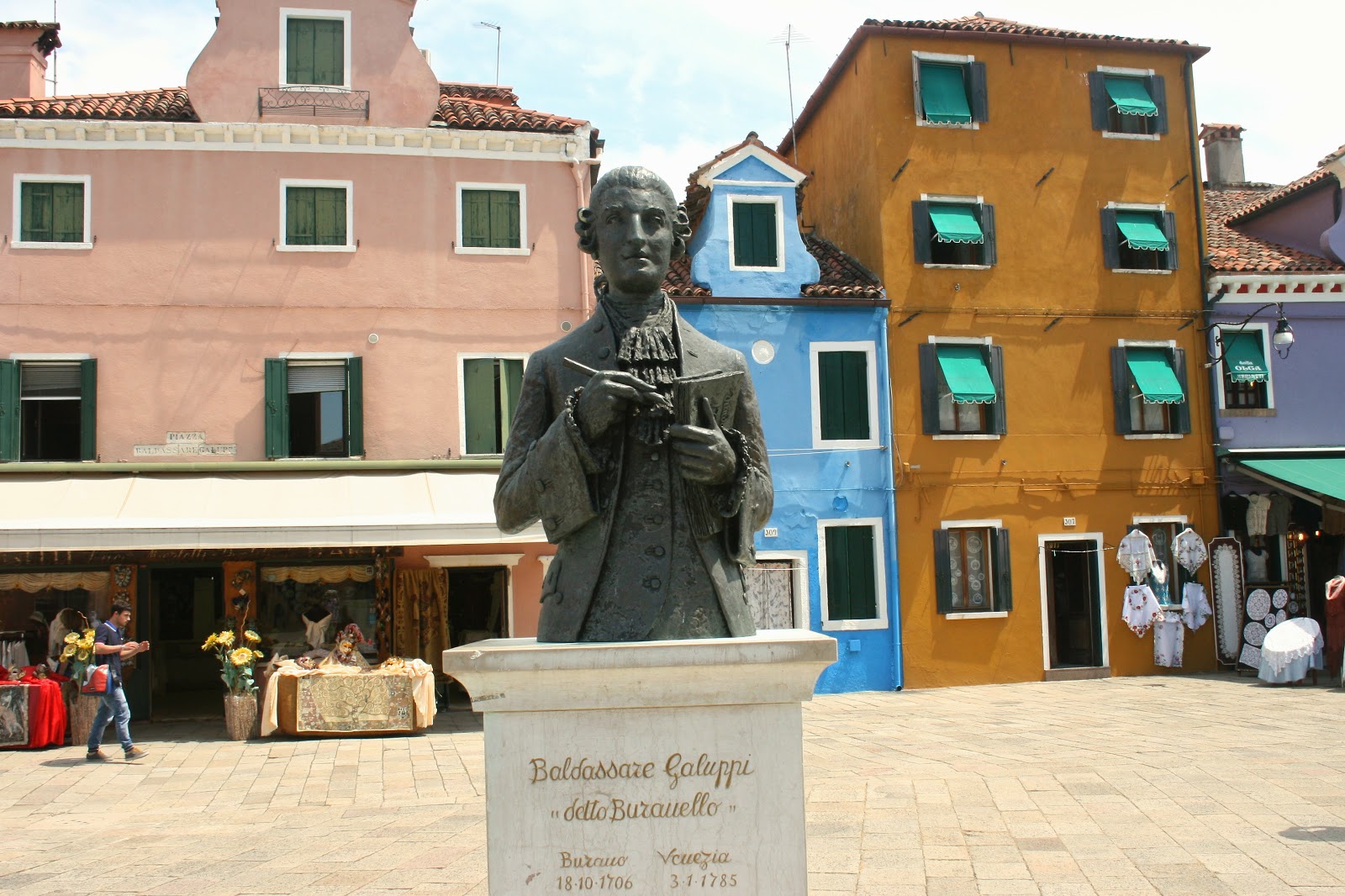 I first heard about Galuppi when I was at school studying the poetry of the Victorian English poet Robert Browning (1812 – 1869) who was yet another Northern European who died in Venice. His poem, written in the voice of a slightly pretentious Englishman, grows to a melancholy sense of regret that I remembered standing alone in that  little colourful square.

Oh Galuppi, Baldassaro, this is very sad to find!
I can hardly misconceive you; it would prove me deaf and blind;
But although I take your meaning, ’tis with such a heavy mind!Here you come with your old music, and here’s all the good it brings.
What, they lived once thus at Venice where the merchants were the kings,
Where Saint Mark’s is, where the Doges used to wed the sea with rings?

Ay, because the sea’s the street there; and ’tis arched by . . . what you call
. . . Shylock’s bridge with houses on it, where they kept the carnival:
I was never out of England—it’s as if I saw it all.

Did young people take their pleasure when the sea was warm in May?
Balls and masks begun at midnight, burning ever to mid-day,
When they made up fresh adventures for the morrow, do you say?

Was a lady such a lady, cheeks so round and lips so red,—
On her neck the small face buoyant, like a bell-flower on its bed,
O’er the breast’s superb abundance where a man might base his head?

Well, and it was graceful of them—they’d break talk off and afford
—She, to bite her mask’s black velvet—he, to finger on his sword,
While you sat and played Toccatas, stately at the clavichord?

What? Those lesser thirds so plaintive, sixths diminished, sigh on sigh,
Told them something? Those suspensions, those solutions—”Must we die?”
Those commiserating sevenths—”Life might last! we can but try!

“Were you happy?” —”Yes.”—”And are you still as happy?”—”Yes. And you?”
—”Then, more kisses!”—”Did I stop them, when a million seemed so few?”
Hark, the dominant’s persistence till it must be answered to!

So, an octave struck the answer. Oh, they praised you, I dare say!
“Brave Galuppi! that was music! good alike at grave and gay!
“I can always leave off talking when I hear a master play!”

Then they left you for their pleasure: till in due time, one by one,
Some with lives that came to nothing, some with deeds as well undone,
Death stepped tacitly and took them where they never see the sun.

But when I sit down to reason, think to take my stand nor swerve,
While I triumph o’er a secret wrung from nature’s close reserve,
In you come with your cold music till I creep thro’ every nerve.

Yes, you, like a ghostly cricket, creaking where a house was burned:
“Dust and ashes, dead and done with, Venice spent what Venice earned.
“The soul, doubtless, is immortal—where a soul can be discerned.

“Yours for instance: you know physics, something of geology,
“Mathematics are your pastime; souls shall rise in their degree;
“Butterflies may dread extinction,—you’ll not die, it cannot be!

“As for Venice and her people, merely born to bloom and drop,
“Here on earth they bore their fruitage, mirth and folly were the crop:
“What of soul was left, I wonder, when the kissing had to stop?

“Dust and ashes!” So you creak it, and I want the heart to scold.
Dear dead women, with such hair, too—what’s become of all the gold
Used to hang and brush their bosoms? I feel chilly and grown old. 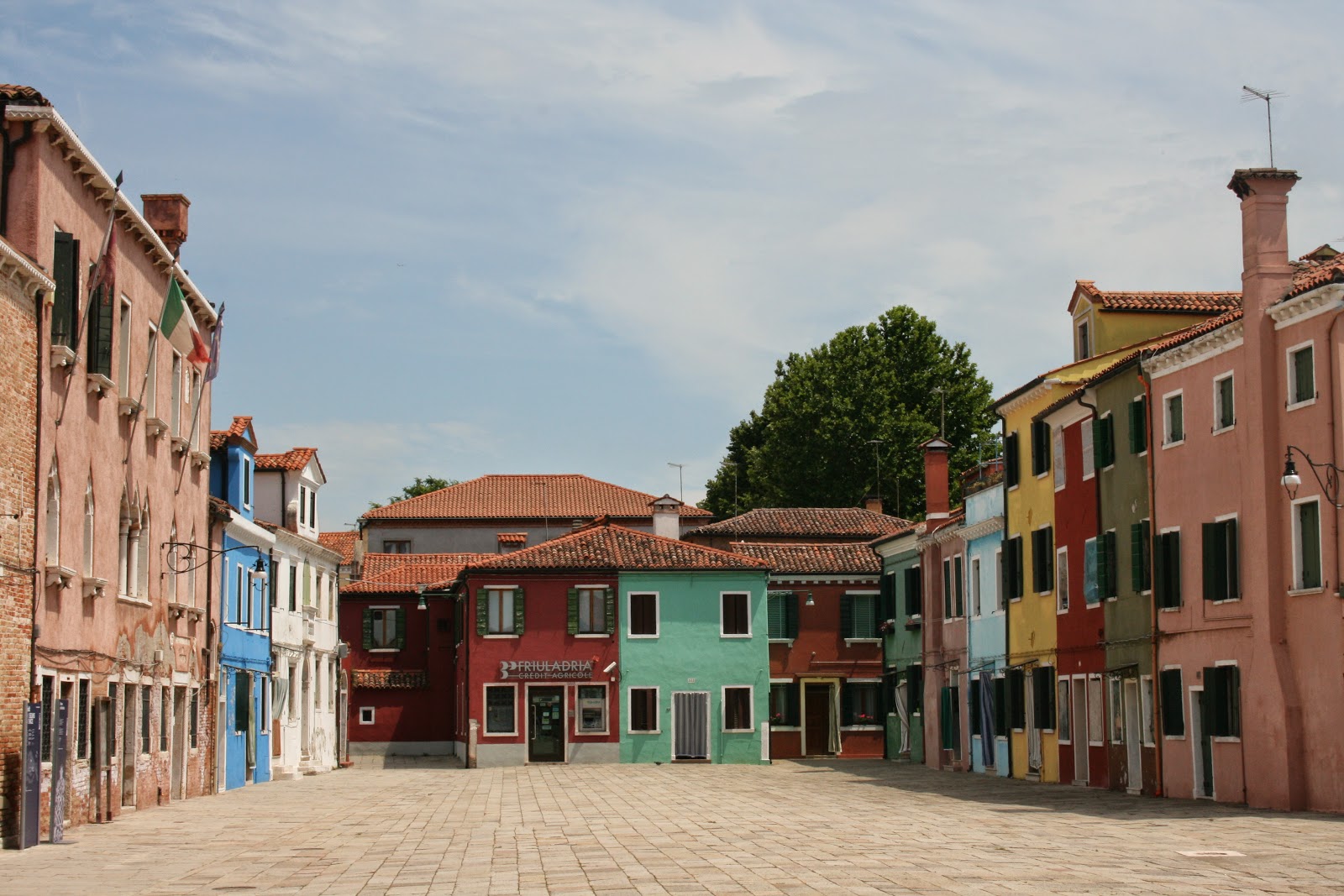 Galuppi wrote concertos and sacred music as well but here is one of his operatic arias for soprano and trumpet, Alla tromba della fama, performed by the Wasa Baroque Ensemble. It’s great fun and, yes, suitably colourful for any taste.

By coincidence, I went to a concert of Vivaldi’s music later that week and, on the bill, was a harpsichord concerto by Baldassare Galuppi – there too when his music played, I smiled. 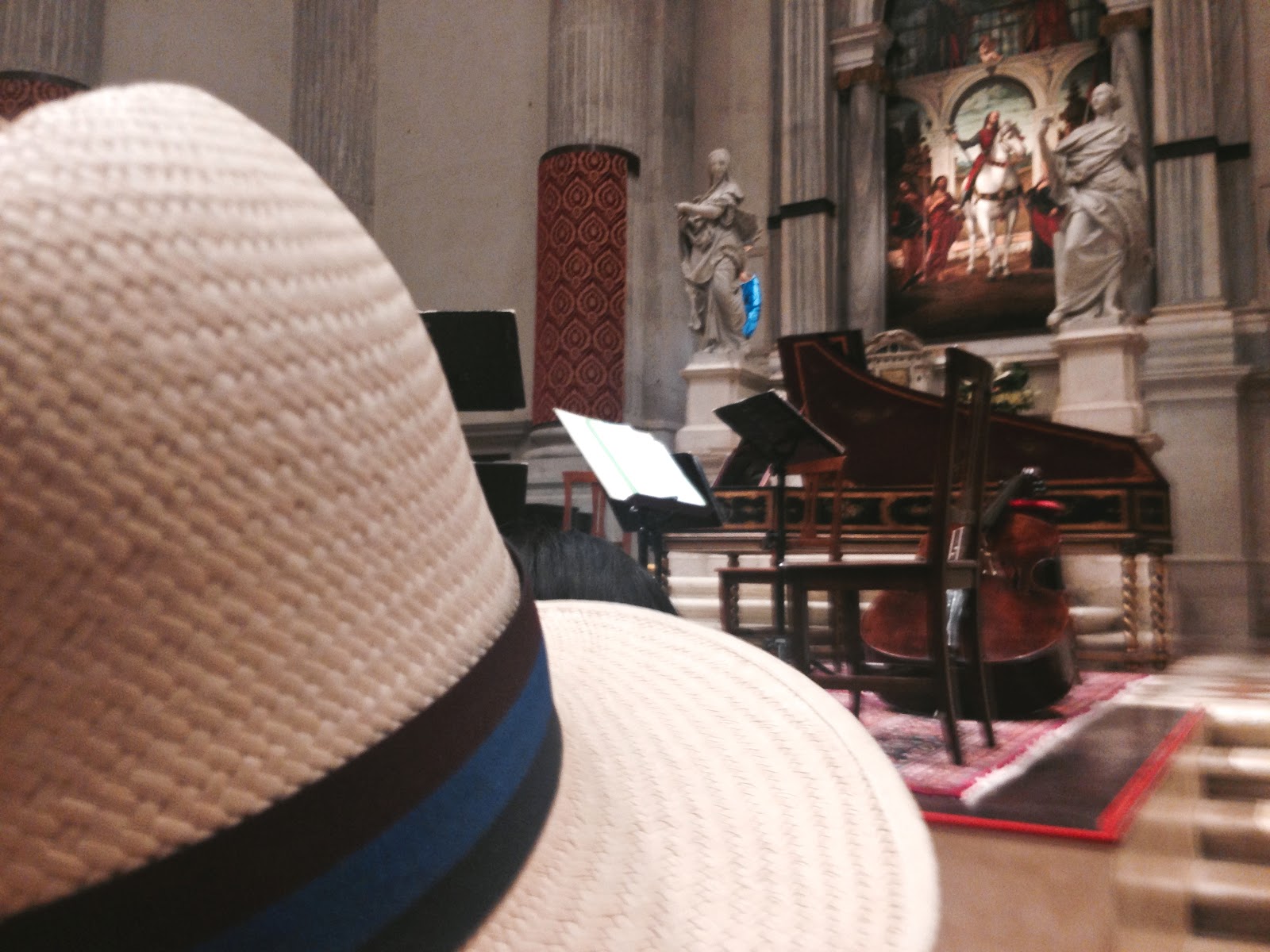 This is his harpsichord concerto in F – worth a quarter of an hour of your time if you feel like relaxing.