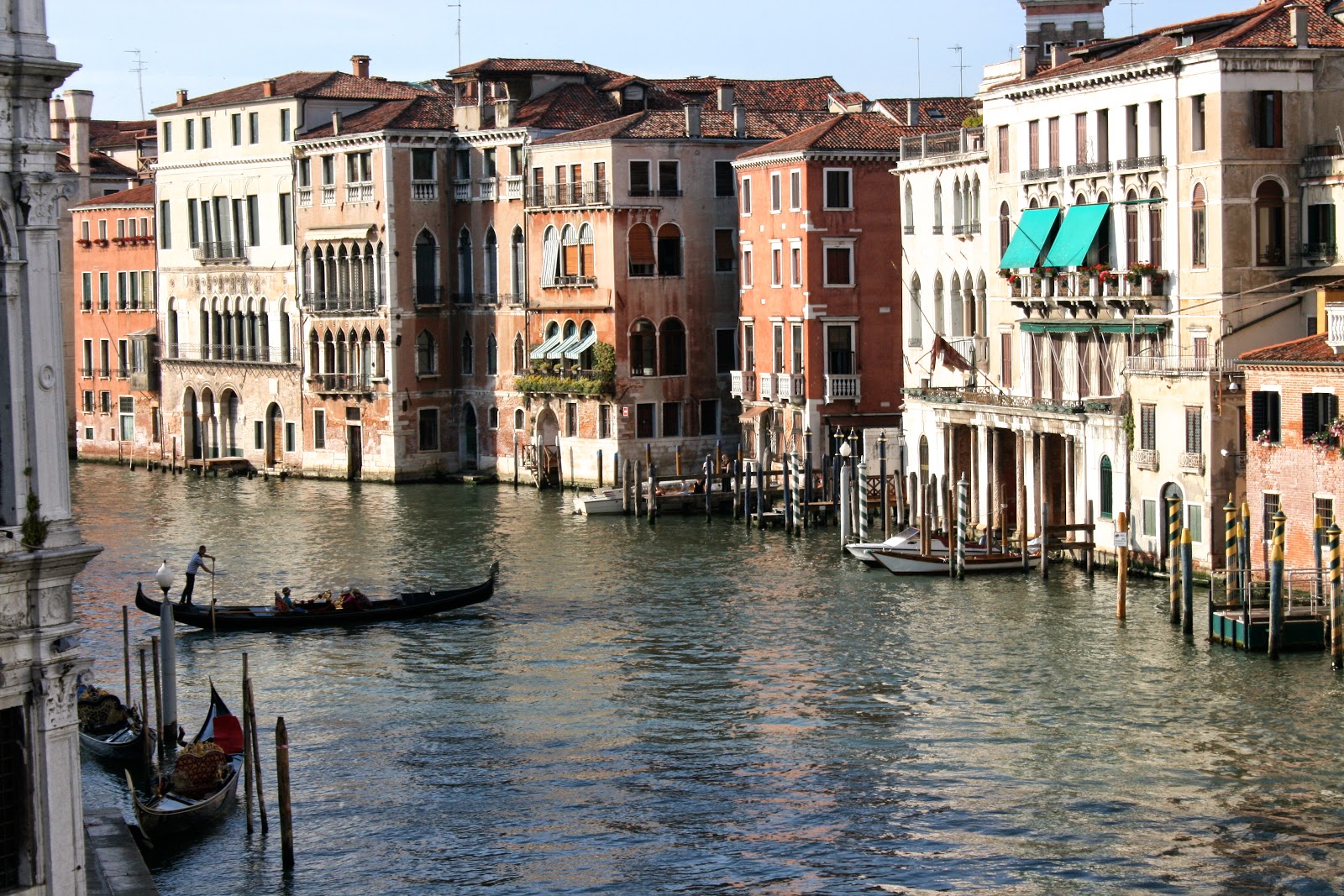 Venice and gondolas are inseparable – they are the horse and the carriage, the peach and the cream, the fish and the chips – well, you get my drift. They were once the main form of transport on the Venetian canals, these flat bottomed boats propelled by a standing gondolier using a long oar. 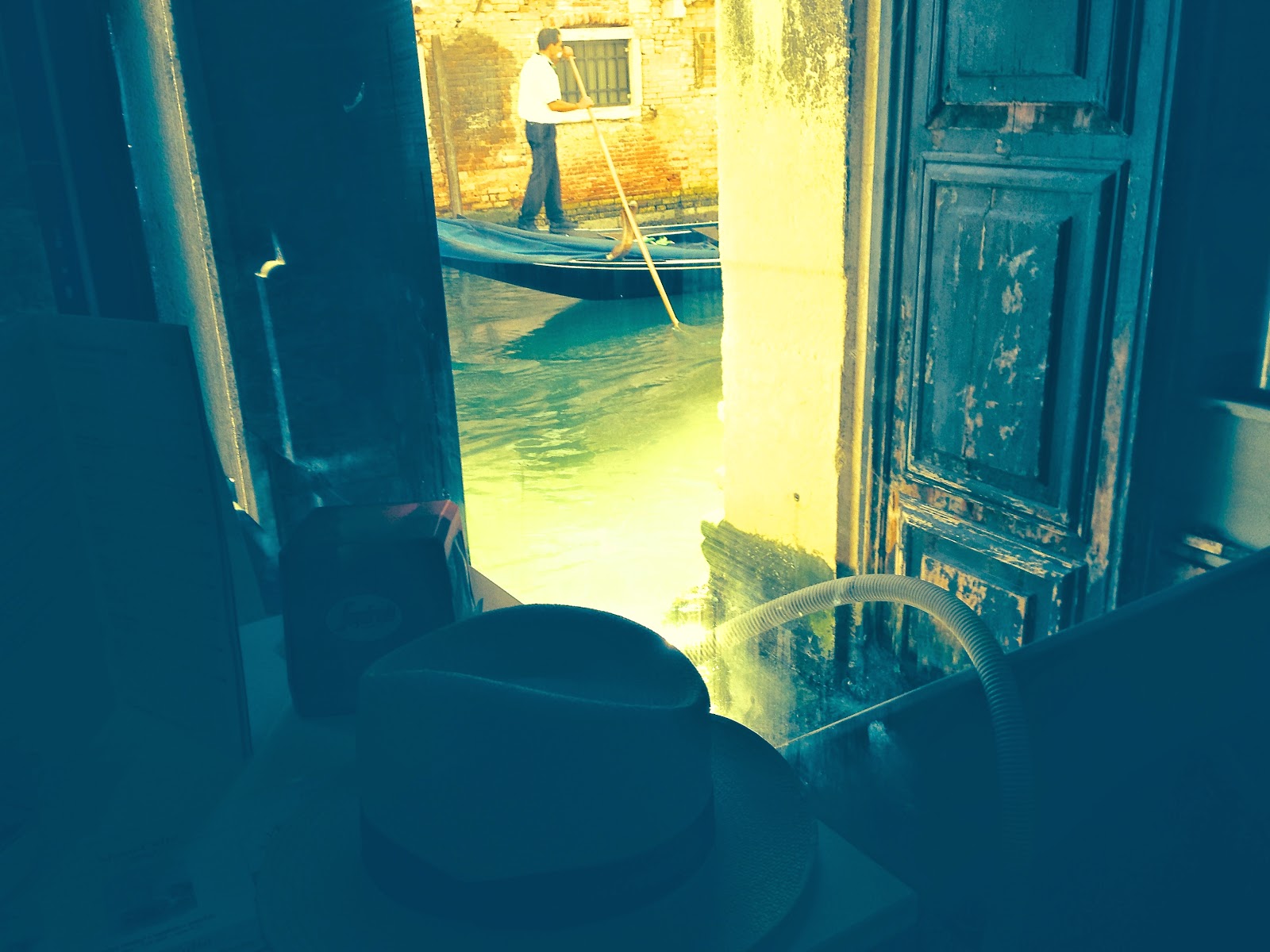 Gondoliers are really rowing their boat not pushing it along with a long pole as in punting. Gondolas were and still are useful as ferries in a city so divided by canals. Everywhere you go, you are bound to see at least one gliding along, their gondoliers using the centuries old technique that suits these waters. 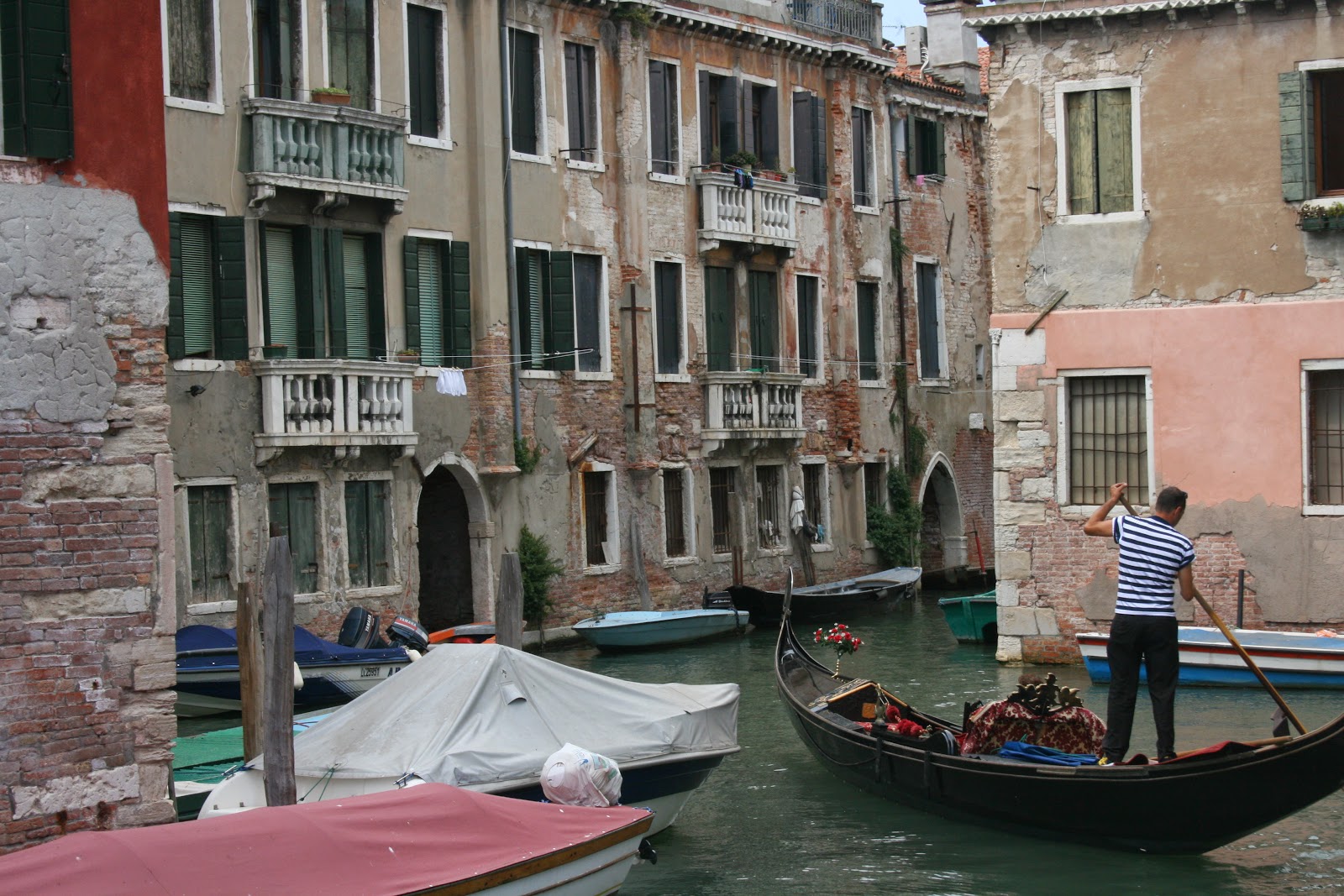 I spent two weeks in Venice recently and I have grown to admire this ancient form of travel. It’s not as easy as it might look so it was interesting watching two novices practicing out there on the Grand Canal – they may have been new to this but I suspect they have gondolier blood in spite of their non-traditional dress. 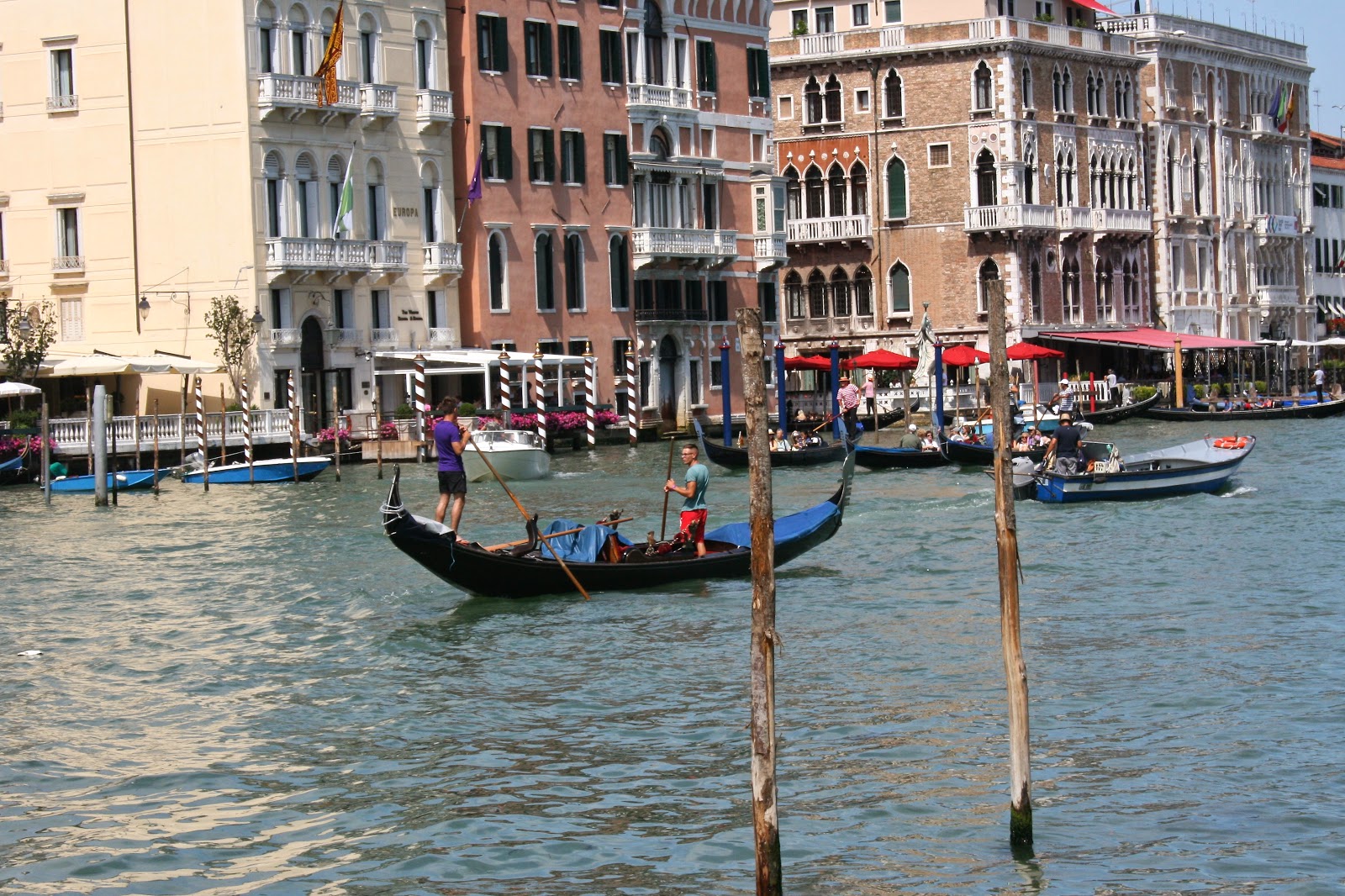 Gondolas these days are mostly tourist attractions. It is de rigueur to hire one and prove that you really are in love with the person lucky enough to sit snuggling up to you on the small gilded throne. It has, of course, become a bit of a romantic cliche and, for some couples, a substitute for more original declarations of their feelings. Not so, I hope, this couple who were married in the Santa Maria Salute basilica at one end of the Grand Canal and then were transported to the reception in a canal side hotel ten minutes away by gondola. 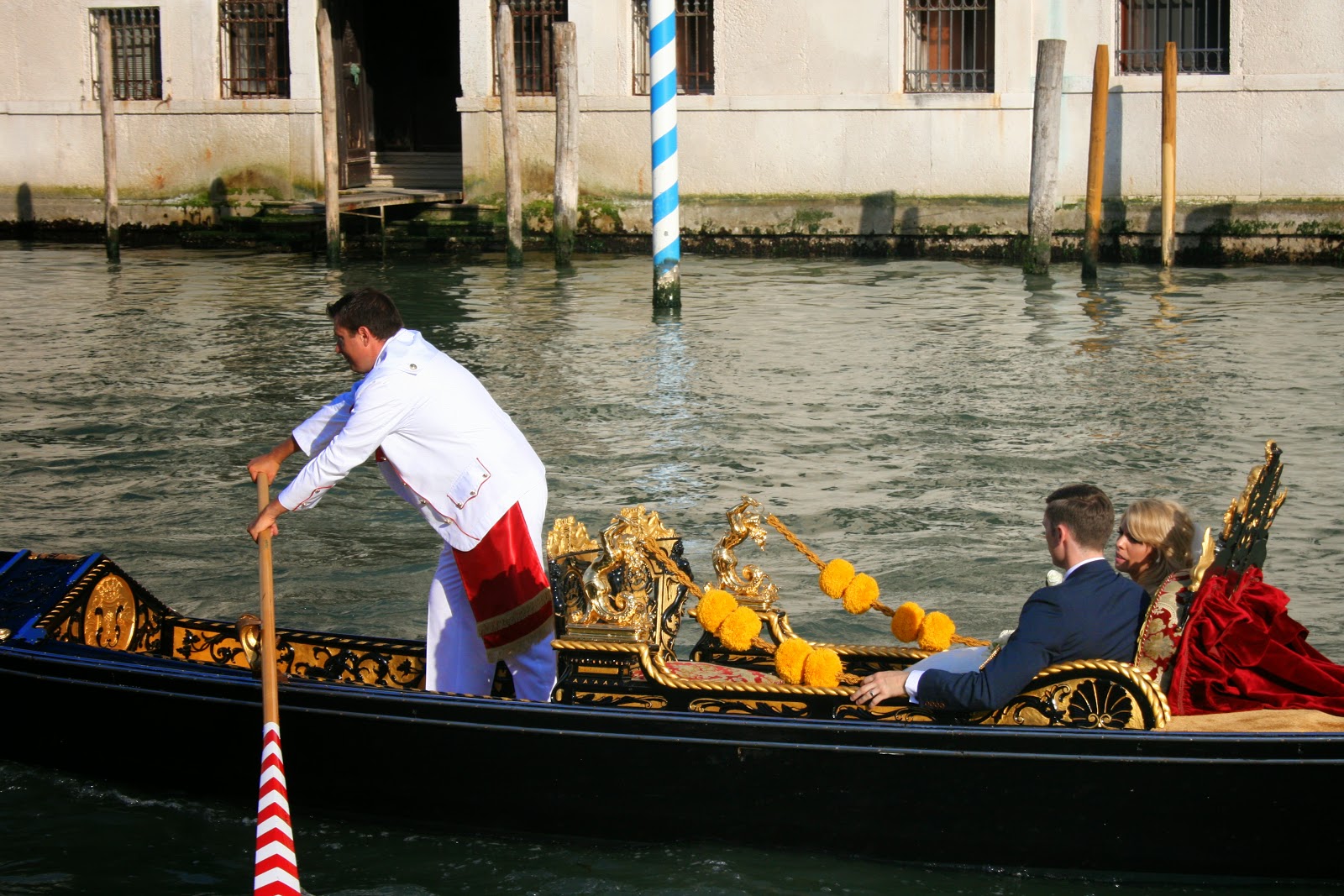 Even I had to admit that,  by any standard, this looks pretty darn romantic. 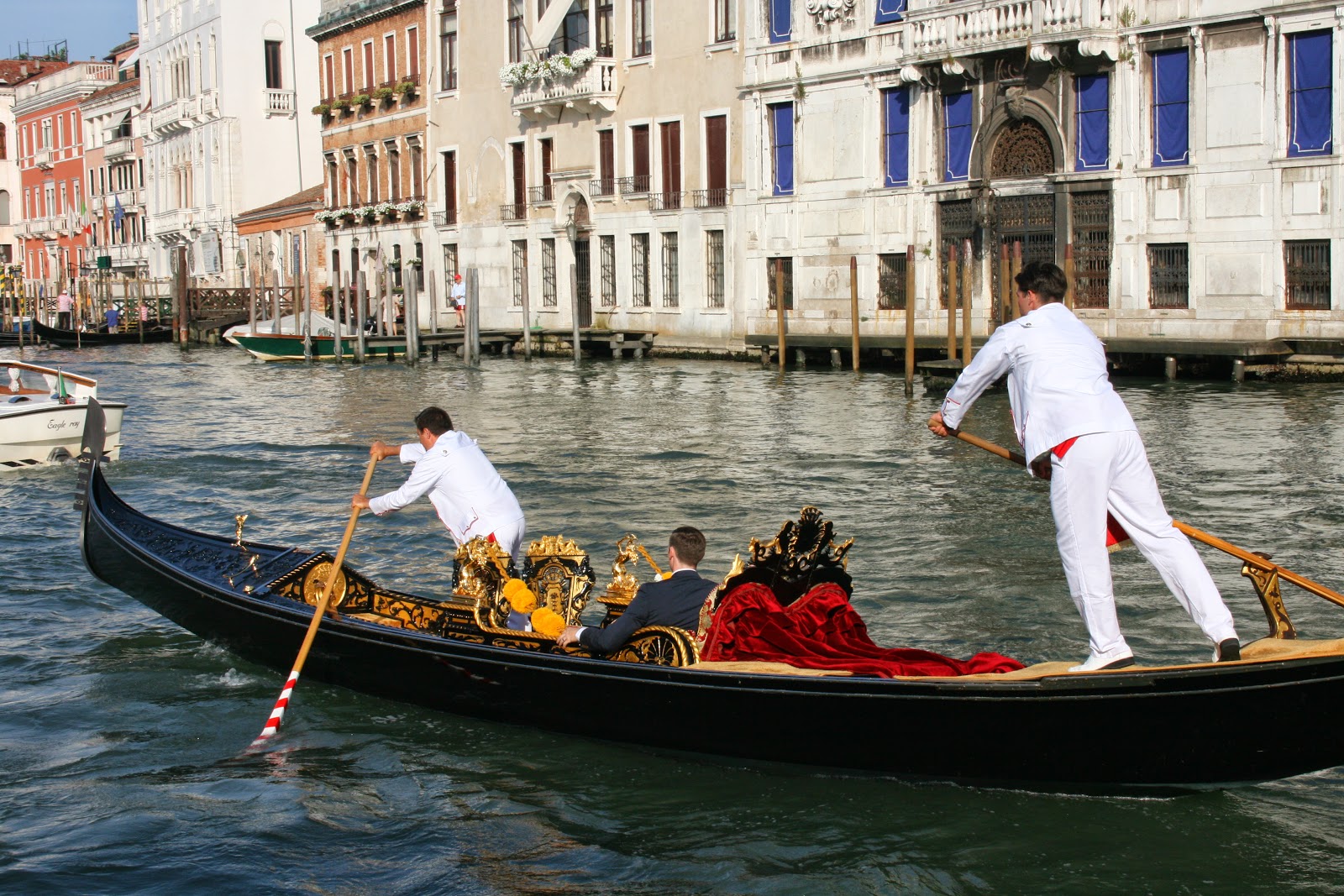 So, hire one if you can afford to, when you go to Venice. It might be dead romantic, it might make your feel glamorous, it might even convince you that you’re in love. 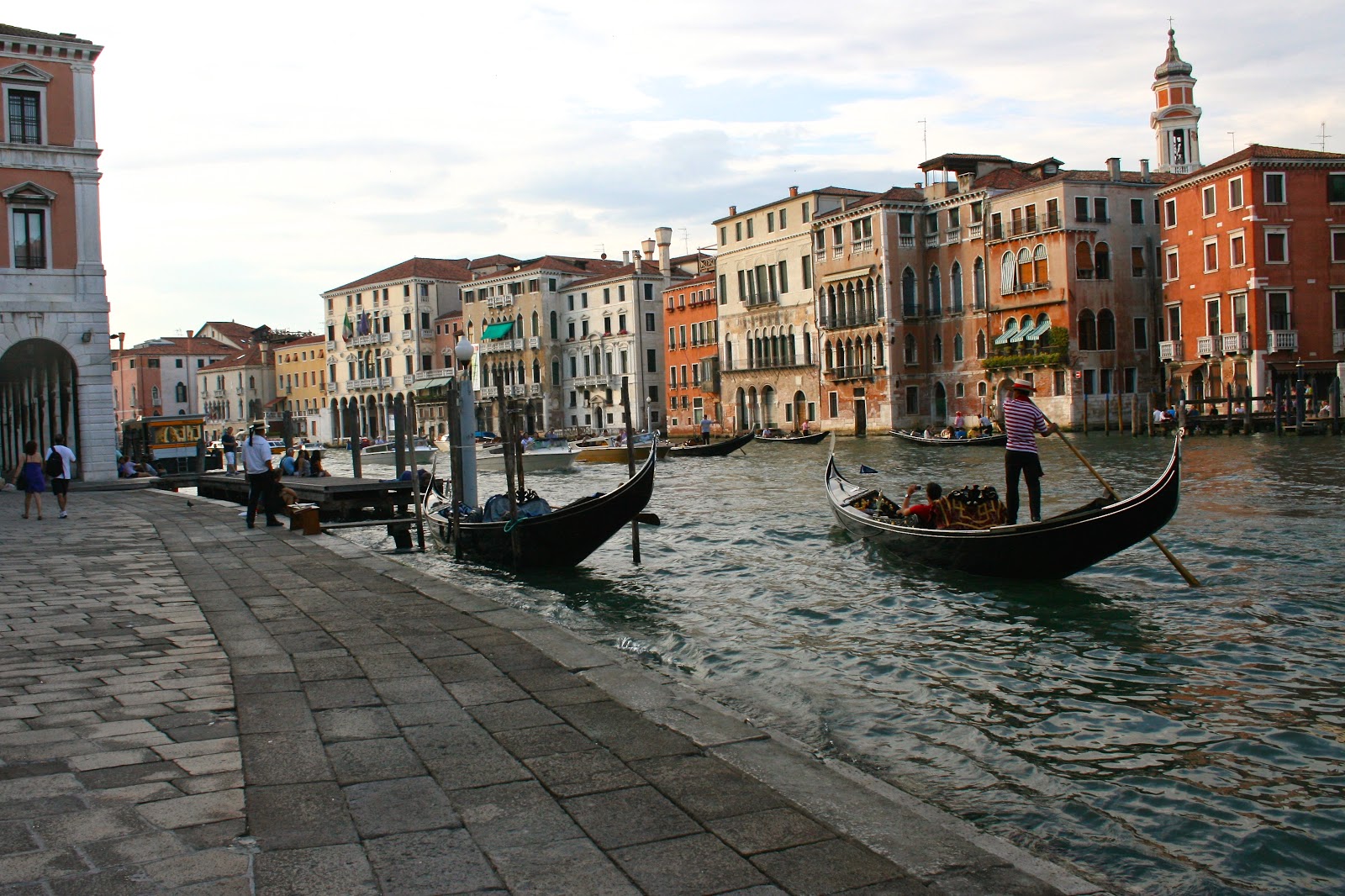 Sometimes, well, it’s only human nature, the gondoliers can charge you silly money for  this most romantic of photo opportunities but you don’t have to accept the price suggestion without a counter argument even if it makes you look less in love by doing so. 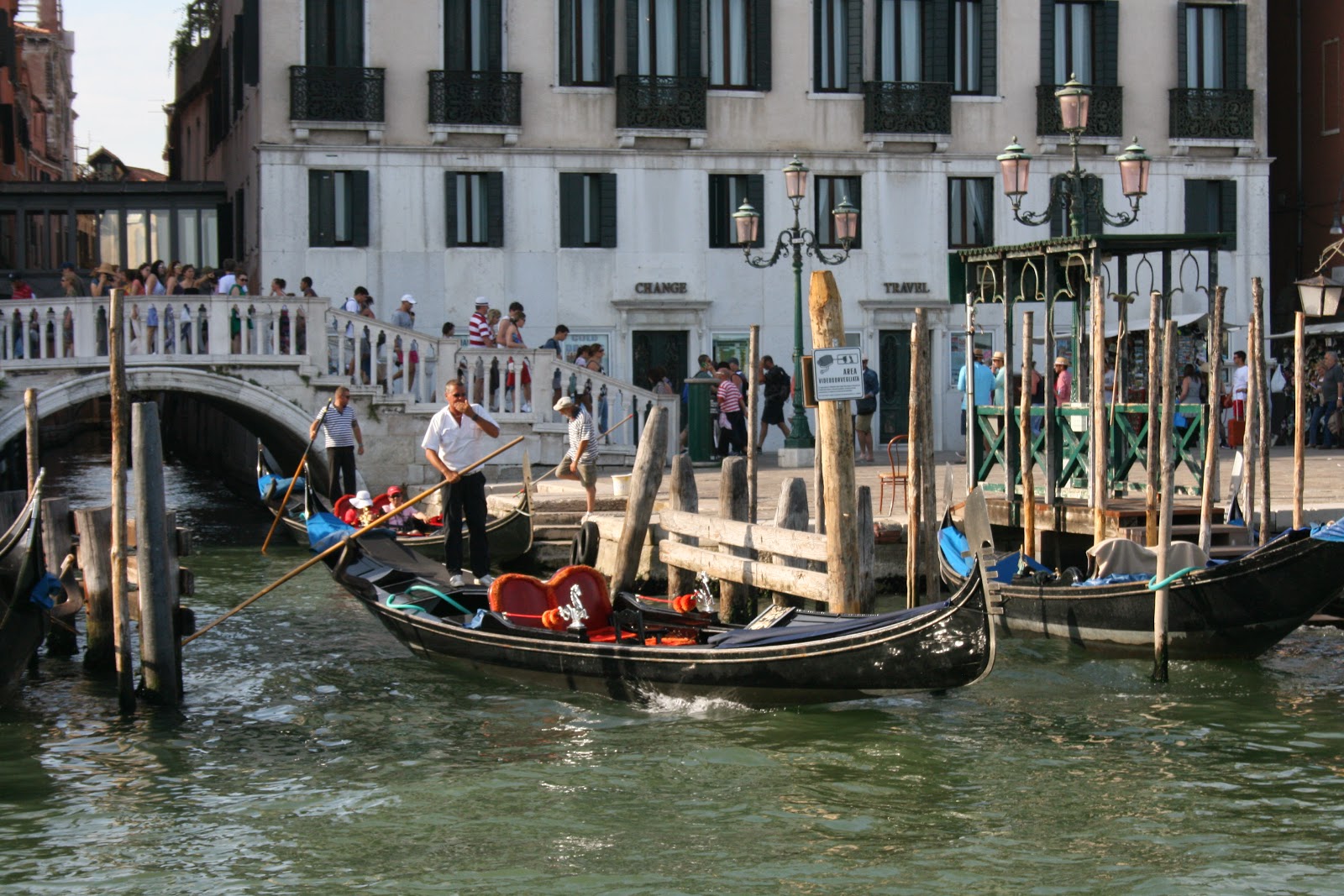 After-all, there are plenty of gondolas and gondoliers in Venice, so you could always opt for a different and more reasonably priced one. 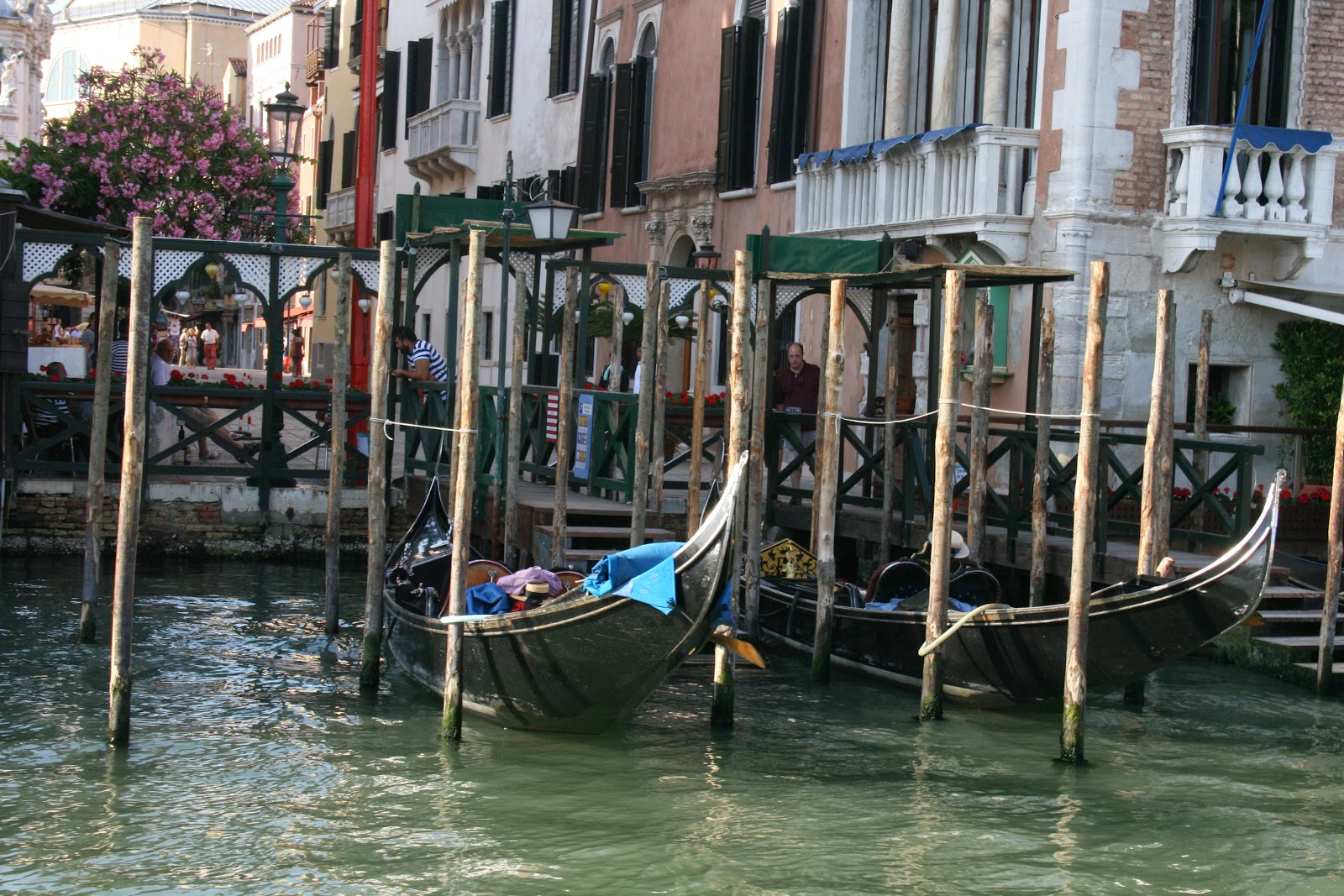 There are many reasons for taking a gondola ride but, maybe, the best one is that is is just such a lovely way of travelling on water. 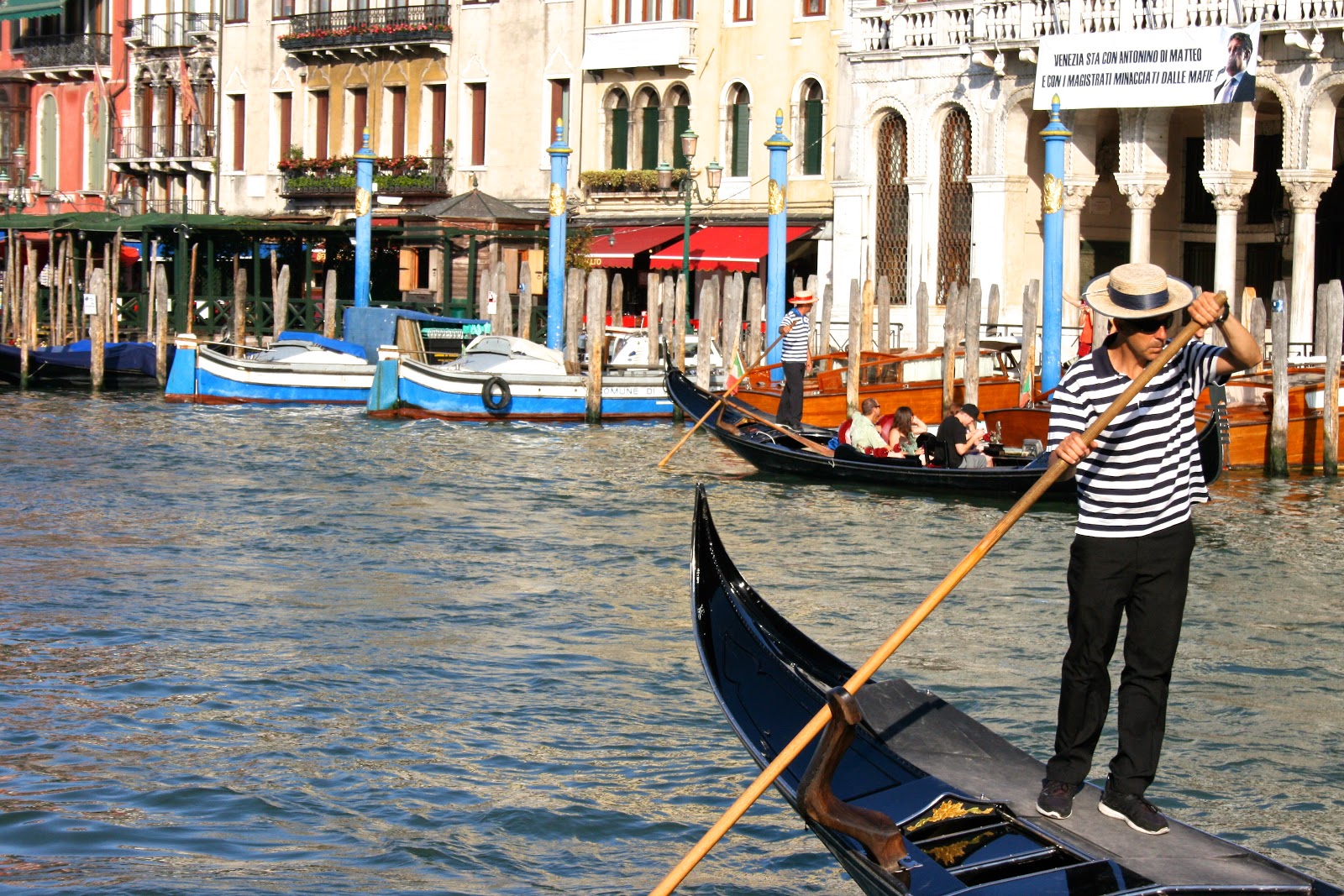 It is also much kinder to this frail crumbling city than the speed boats too often seen racing their way down this ancient thoroughfare. 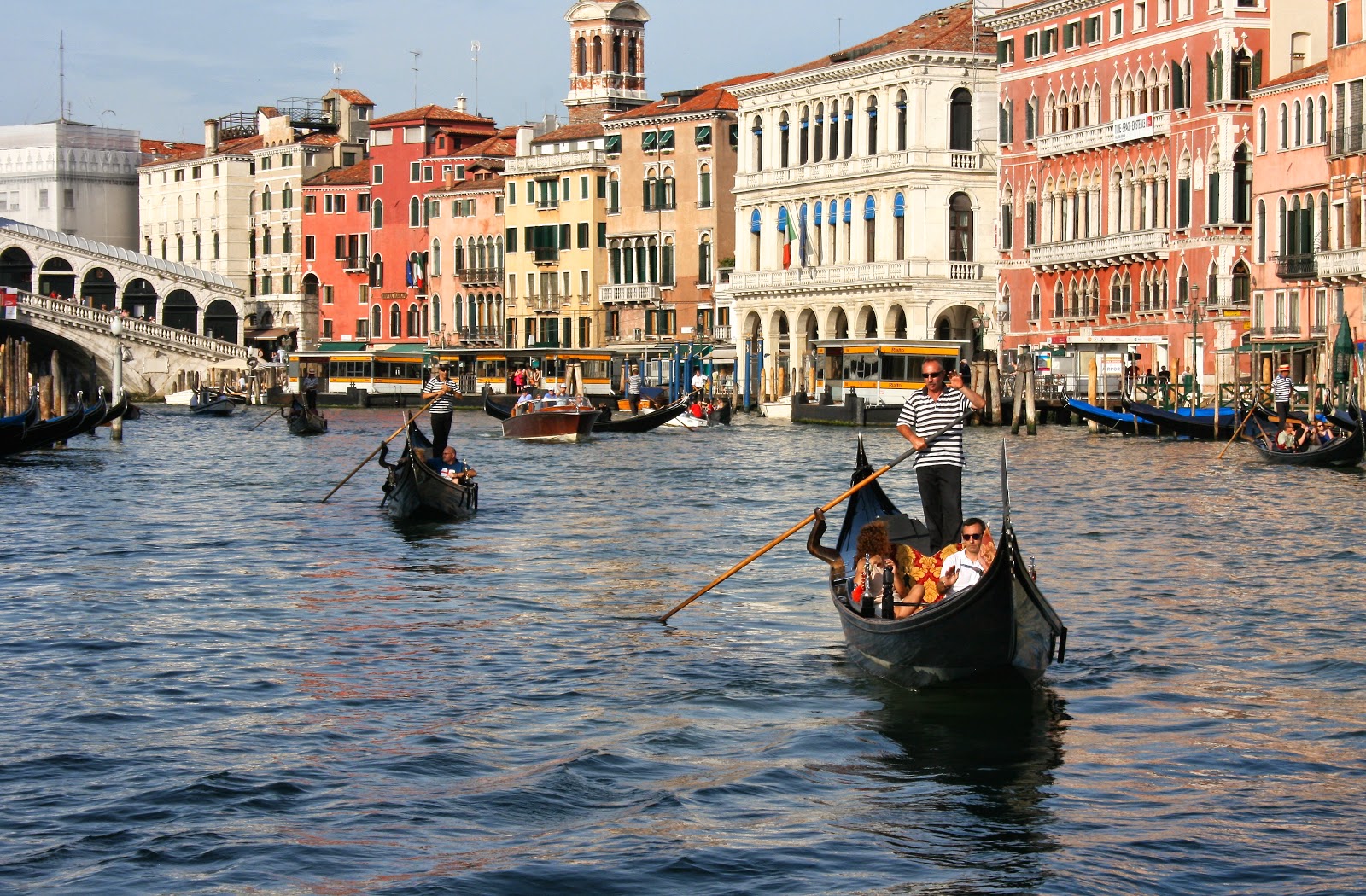