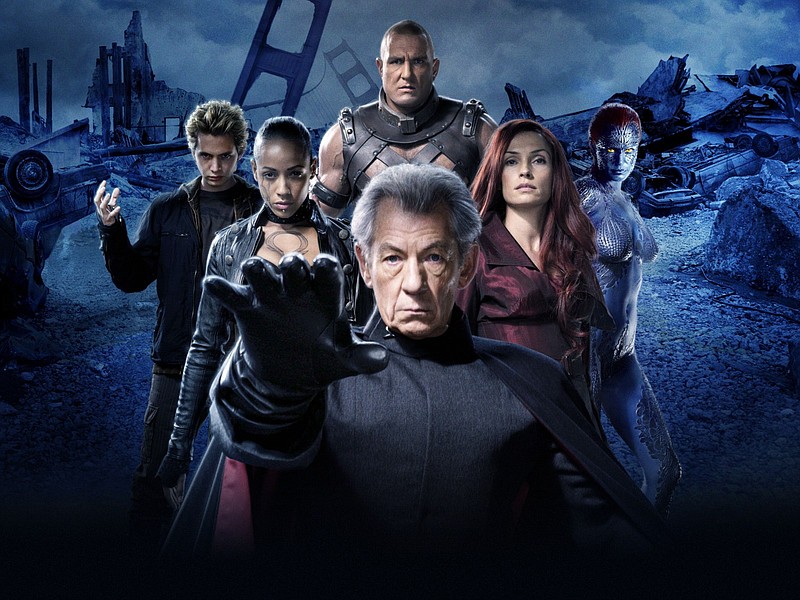 The Mutants are under threat again from those dastardly humans who have found a “cure” for mutancy that can be administered voluntarily by syringe or violently by a gun.
As usual, the mutants divide between kindly All-knowing Know-all Professor Xavier (Patrick Stewart) and evil but charming Magneto (Ian McKellen).
They say:
“As in the previous movies, Hugh Jackman is the highlight, his Wolverine coming across like a young Clint Eastwood – with huge metal claws”  – BBC
“To a successful, thought-provoking superhero series, they have brought misogyny, bombast and over-compensating machismo.” Channel 4
We say:
The new X-Men film, with its new director Brett Ratner, is less thoughtful than the first two – which lightly touched on issues like alienation and prejudice – but what X-Men 3 looses in subtlety it makes up for with spectacular “visuals” and a lively, fast-moving style. The sensational sequence involving the levitation of the Golden Gate Bridge is just the most memorable of a whole series of brilliant special effects. It has, though, an end-of-term decadence about it.  The script is clumsy, lazily churning out the usual let’s live together in perfect har-mon-ee platitudes with some corny gags thrown in.
As usual, our sympathies lie with the moody figure of Wolverine played charismatically by an increasingly weathered-looking Hugh Jackman. In spite of the worst Hollywood haircut since Austin Powers, Jackman remains every inch the hero until he is asked to act. Then, even the camera shies away from his close-up. Sharing top billing and limited acting ability with Jackman is the perennial Halle Berry as Storm. Just when we are wondering what she is there for, she repeats her best moment from X-Men 2, her asset-shaking descent down a flight of stairs. No one does it better.
Patrick Stewart reprises his bland wise professor, Kelsey Grammer (television’s Frazier) is the surprising newcomer as a bizarrely blue and furry senator but Ian McKellen acts the pants off everyone as that very likeable villain Magneto.
If you love the X-Men series then you must see how it ends but make sure you don’t miss the “surprise” at the end of the closing credits!
Starring:
Hugh Jackman
Famke Janssen
Ian McKellen
Halle Berry
Patrick Stewart
Kelsey Grammer
Director:
Brett Ratner
Running time:
103 mm
0
25th May 2006
No Comments Yet