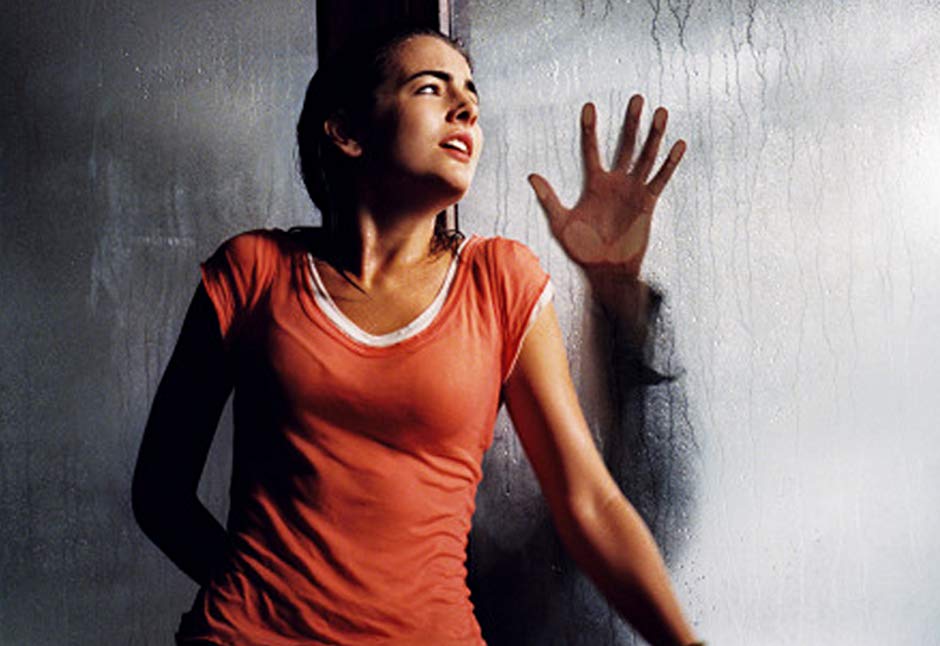 This 70’s remake is Scary Movie without the laughs but go for it if you like your slash flicks fast and familiar.
Nubile high school pin-up, Jill Johnson (Camille Belle) gets the baby-sitting job from hell stranded in a remote household with a stranger who just can’t keep off the phone.
They say:
“It can’t have been easy to try to make something fresh out of a plotline that most of your audience will have heard as an urban myth when they were six.”  The Independent.
“For all its faults, When A Stranger Calls manages to be a perfectly watchable film that delivers the goods, however familiar those goods are”.  Daily Mirror.
We say:
You have to like the teen slasher genre and empathize with perfectly formed mid-American preppy teenagers to get much from Simon West’s stylishly constructed movie.
In fact Camilla Belle does a convincing job as the High school heart-throb forced to baby-sit in a luxurious but remote mansion in rural Colorado.
From the moment she bites off the top of her tumescent scarlet lolly, you know that her stalker has bitten off more than he can chew. Simon West, lest we miss the attempt at subtlety, has her leave it to melt gorily on a white napkin.
The whole film is a triumph of style over content. The mansion, a magnificent piece of modernist design, is all glass and expensive lighting effects with enough staircases and corridors to fulfill even Alfred Hitchcock’s wildest imaginings.
Filled with life-sized sculptures and paintings of frenzied-looking men, the interior design itself would have been enough to send Jill into hysteria without any help from the heavy-breathing phone-caller or the stormy weather. No wonder the kids are bad sleepers.
The camera, hardly ever static, stalks its prey relentlessly, often swinging high from a crane or on fast-moving tracks interrupted by crashing zooms and jump cuts. The script stumbles to keep up and, after ninety odd minutes of constant camera-movement, we are as exhausted as poor Jill Johnson herself.
Just like your favourite panto, there are no real surprizes amongst this string of clichés and yet there are still kicks to be had from the way the story is told.
Cert 15
Starring:
Camilla Belle
Tommy Flanagan
Director:
Simon West
Running time:
97mm
0
13th May 2006
No Comments Yet