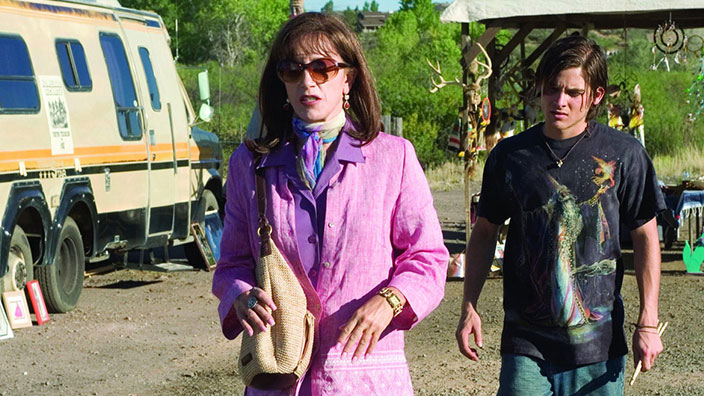 Bree, formerly Stanley (Felicity Huffman) is a week from her gender realignment operation when she discovers that she has a 17-year-old son, Toby (Kevin Zegers) a rent boy in trouble with the law. Reluctantly she helps him and the two, in classic road movie style, cross America together on a journey of mutual discovery.

“Felicity Huffman’s magnificently tense performance proposes that it’s a serious stretch of physical and psychological practice for a man to become a woman – even if the man is a woman in the first place.” – The Independent.

“Though Huffman is outstanding, the film itself lacks focus – unable to decide whether it’s a serious exploration of identity issues or a smart-mouthed buddy flick.” – Radio Times.

That well-tried genre the American road movie is claimed for transsexuals in Duncan Tucker’s funny and poignant film starring Oscar-nominated Felicity Huffman – a woman playing a man playing a woman. This is no camp drag act; the comedy never obscures the psychological trauma as transsexual Bree/Stanley faces surgery and fatherhood all in the same week. Felicity Huffman out-totters Jack Lemon in Some Like It Hot, in her impersonation of a gawky, shy, even rather conventional man trying to be feminine; she stumbles in high heels, forgets to cross her legs and handles her fully functional prosthetic penis with magnificent disdain when caught short on the open road. True to the genre, there are many colourful cameo performances en route as the couple encounter a mostly benign but sometimes sentimentalised mid-America on their journey from East to West. Kevin Zegers as her bewildered street-wise son Toby fights manfully for his place amidst a cast of big performances, none bigger than Fionnula Flanagan as the over-powering Catholic mother who is horrified at simultaneously losing a son and gaining a daughter. The film is a clever take on the masculine and feminine divide and shows that, contrary to some opinion, there is more to being a man than just having a penis.