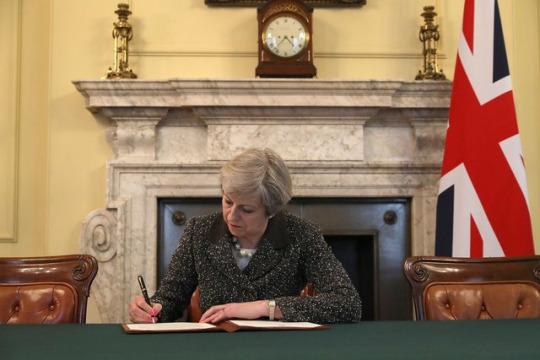 She did it – signed the letter that triggered the United Kingdom’s ‘Brexit’ from the European Union. I had hoped, ever since the depressing referendum result, that, somehow, we might avoid the consequences of what I consider to be the greatest political error in this country during my lifetime. I kept hoping that this wouldn’t happen – even now, I retain a small grain of optimism that this might still be averted. Let’s not give up, us the so-nearly half of the United Kingdom who voted to remain in the EU. Let’s keep saying it, shouting it, even, until the United Kingdom realises that this is a great mistake made because of an ill thought-through referendum, because of a cowardly and shallow prime minister, David Cameron, and an evasive and increasingly arrogant prime minister, Theresa May.

Let’s not give up until all hope is lost – there is still time to revoke the trigger, to vote again on the biggest constitutional change this country has seen since the Second World War. Let’s not give up – it’s too great a mistake for us to just shrug and say there’s nothing more we can do.