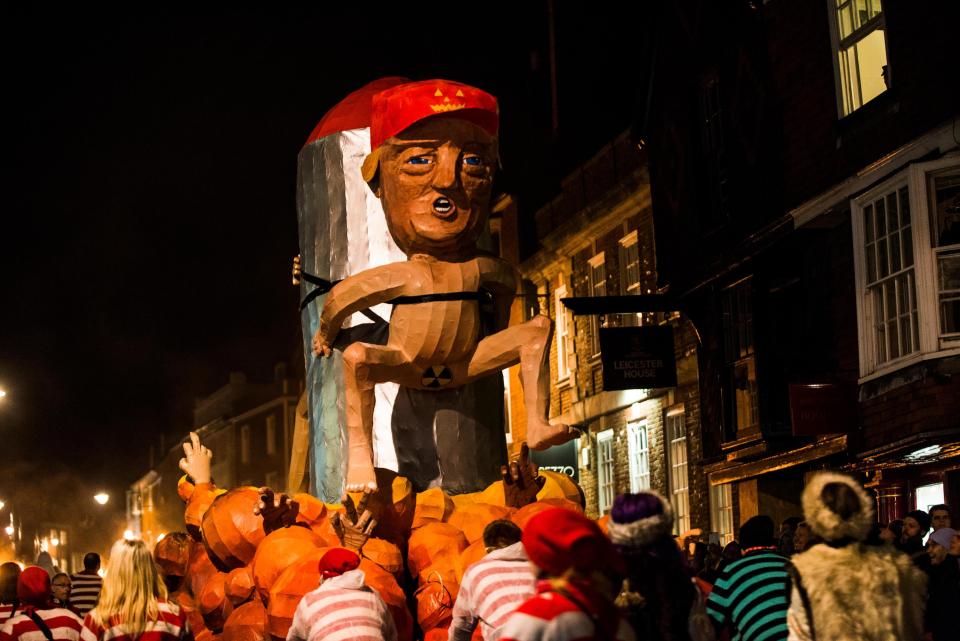 Those two rocket men, Donald Trump and Kim Jong-un went up in smoke at Lewes Bonfire, our local and the world’s biggest celebration of that eccentric festival that used to be known as Guy Fawkes Night. Tens of thousands of people head for my hometown of Lewes for the processions, fireworks and most famously, the effigy-parading and ritual- burning of the year’s most infamous celebrities. Donald and Kim were strapped to the same intercontinental missile and, at the end of the evening, they were sent on their way. 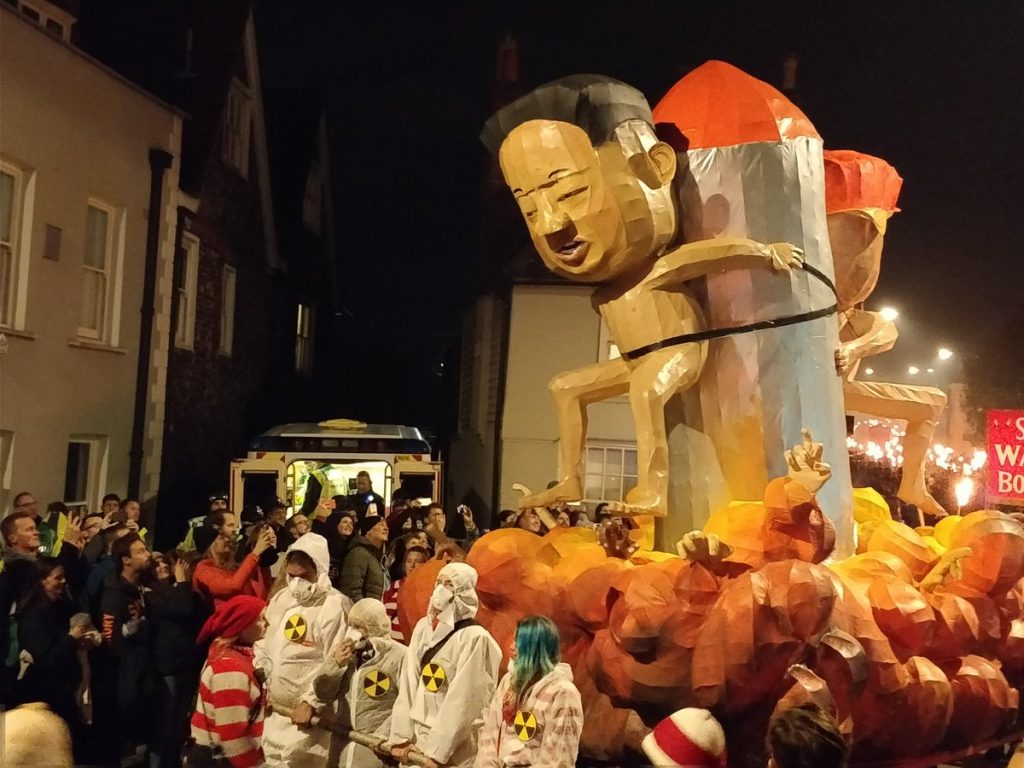 British Prime Minister Theresa May, not exactly a threat to world peace or to anything else much, apart from leading Britain into nowhere after what in Lewes was the hugely unpopular Brexit referendum. Our very own lack-lustre Britannia was led through the streets behind Donald and Kim. 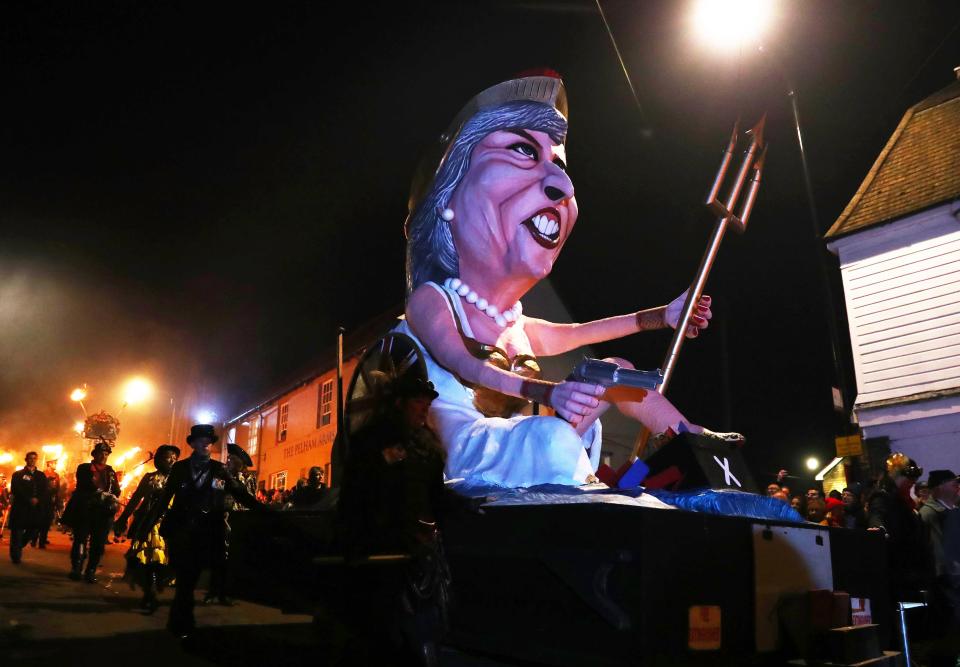 All three ended up on the bonfire – hurrah! I love Lewes’s most anarchic event as did the thousands of people who watched this year’s pariahs go up in smoke. 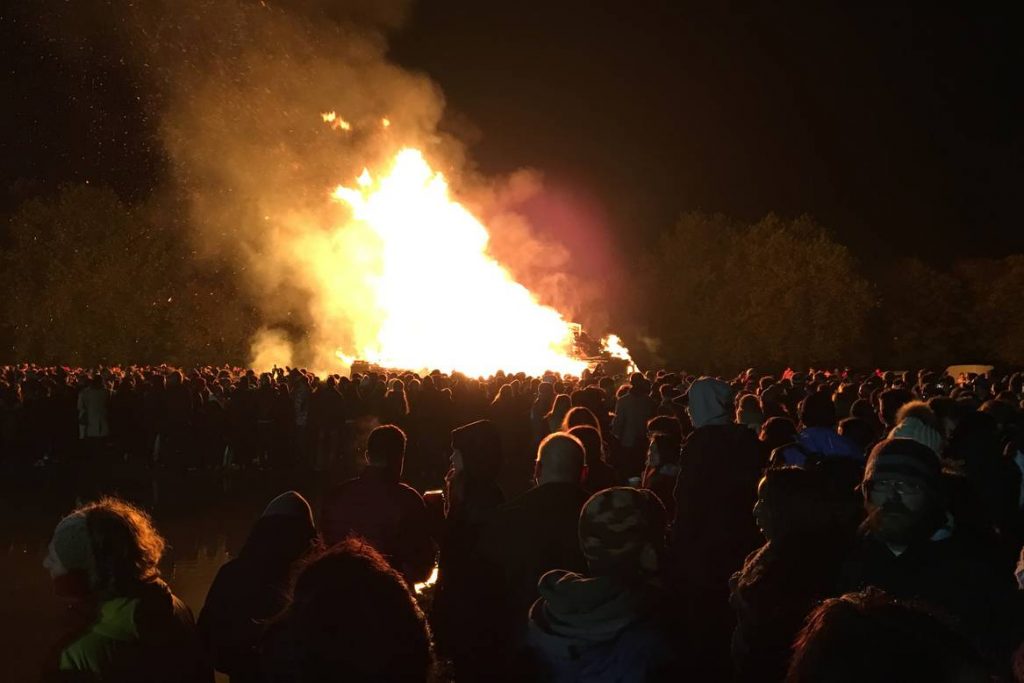 I am lucky to live in Lewes and even luckier at Bonfire because the grand parades come to me and, this time, ten years after moving to this great little town, I watched the whole thing from my window. 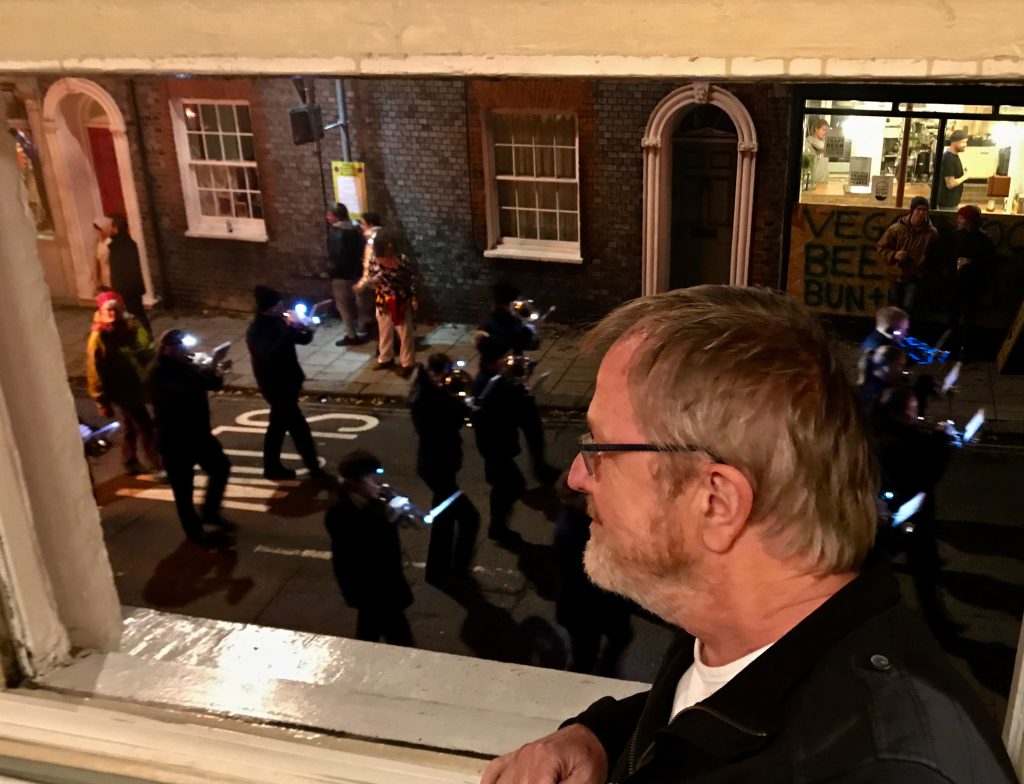 It was my equivalent of a royal box as the processions marched past – I could even shout greetings to friends on parade.

It was an inspiring and slightly insane night which really is unique in these days of safety-first, political-correctness and safe rooms. Nothing felt safe that night – but the danger was served with a sense of humour. Long may it prosper. 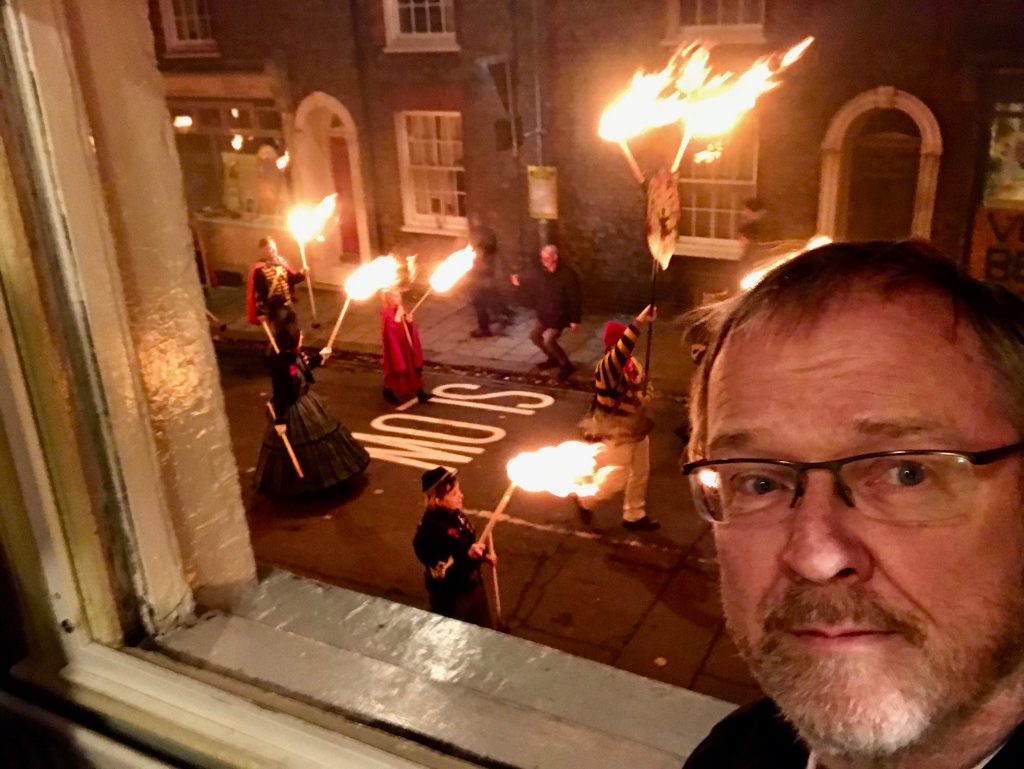 That evening of long-held traditions ended, as it always does, with a spectacular display of fireworks which light up the sky all over our small, badly-behaved, provincial town. 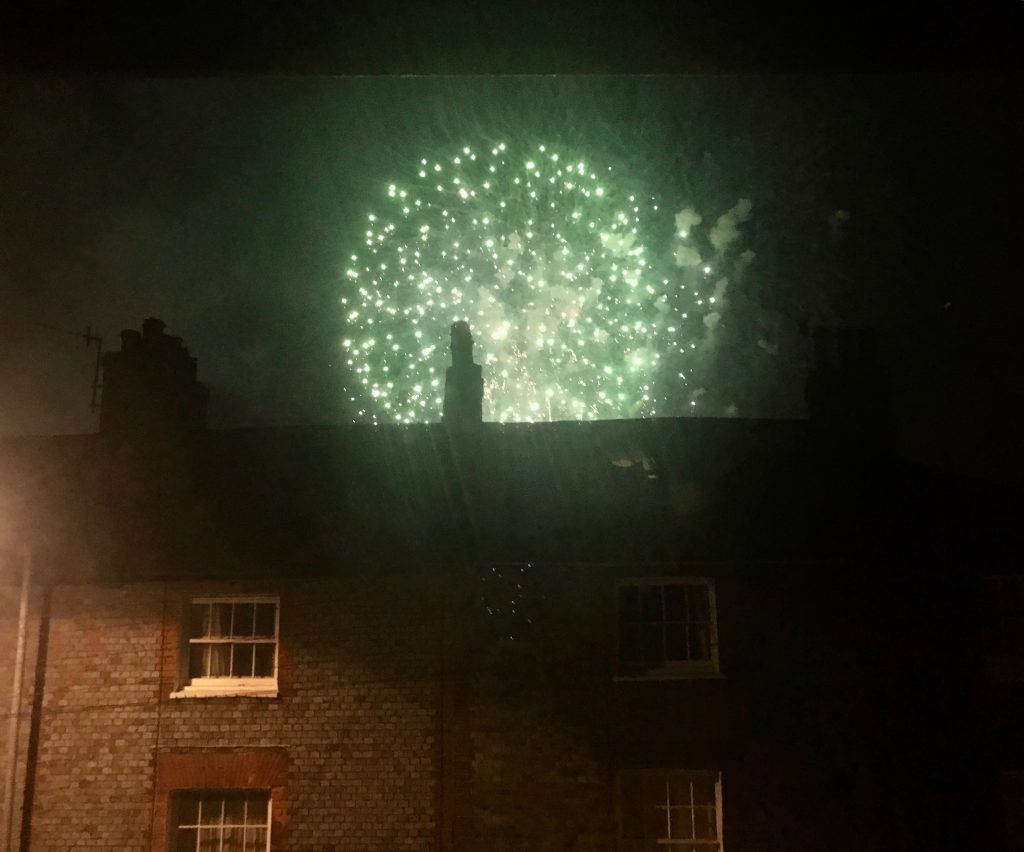 It was wonderful to see it all from my own personal box. See you next year, folks! 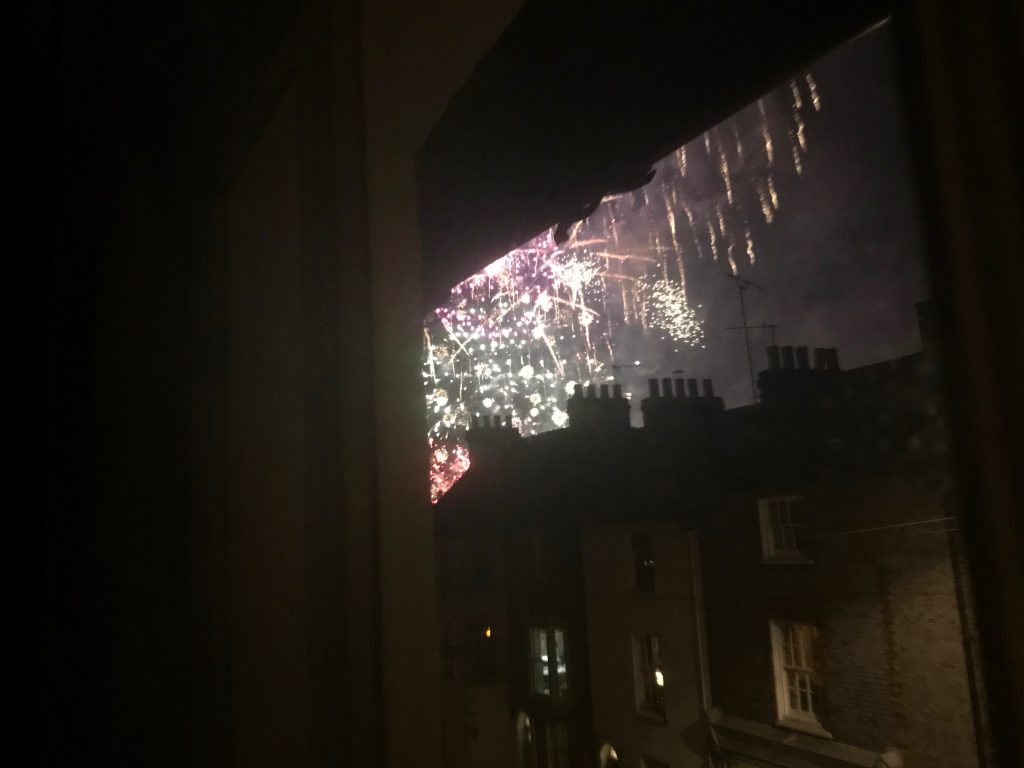