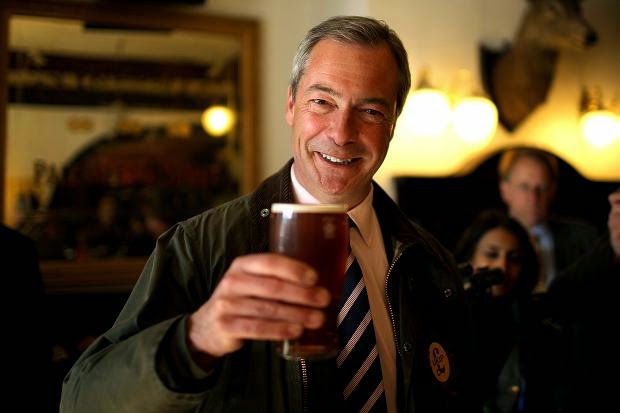 I’ve often been told that I’m an odd sort of chap and that I’m, well you know, a bit different from other people. I’m not that strange, honestly, I fancy a pint down the pub as well as the next man and I like a laugh in congenial company and more often than I’d like, I get things wrong. So far so normal.

Today, though, I can see what all those people meant. I am a bit different.

I live in Lewes in the UK. I love this town for all its eccentricities, its beauty, its pubs and for the convivial company where I can often have a laugh. Today though I found out that, in the European Elections last week,  Lewes has joined the majority of the country by voting for a party that is led from the front by a normal sort of bloke who likes his pint and enjoys a good laugh down the pub. I’m sure that the jovial and remarkable Nigel Farage, is fun to spend the odd quarter of an hour with – well, maybe five minutes, just long enough to have one of those matey conversations at the bar while you’re waiting for your Guinness to be poured. It would become annoying pretty quickly once you realise that he is one of those people, often encountered after a few drinks, who thinks everything is easy. Economics: simple. International diplomacy: a piece of cake. Health and education: no problem. Just leave it to a few good blokes and everything will be alright. More than that, here let me get you another drink, let us govern Britain, it will be great again even just like it was, well, you know, in the olden days. Oh yes and one other thing, or two actually. Everything would be just great if we stopped all these foreign immigrants coming over here and if we left the European Union. See what I mean? It’s simple.

Sorry Nigel and everyone who voted for him, I don’t think things are that simple but thanks for the pint.

The European Union is, almost everyone admits, ripe for reform but it isn’t one of those baby’s rattles that gets thrown out of the cot the moment baby gets bored with it.  It has its problems, no question, and it has been going through the worst economic situation in its history but it is a remarkable thing this union of so many European countries coming together to share its rich cultural heritage, its vast industrial experience and skills, its potentially vibrant economy and its populations of people who, united, could make Europe a truly inspiring community of minds – greater than its individual parts.

I like living in Lewes, I like being English, I’m proud of my Scottish and Irish ancestry and of all those ancestors who were brave enough to leave home and settle in India, Australia, the US and even as far away as Peru. I like being European too and, to quote the great, one time Lewes resident,  Thomas Paine, I would like to consider myself a citizen of the World.

Here in Britain, maybe for the first time, I feel alienated. I’m beginning to think I must be a bit strange after-all. Looking at those European election results, I wonder about my fellow citizens, I fear for democracy and worry about the future. Nigel Farage has won a remarkable victory, fought an extraordinary campaign and he should be congratulated on a personal achievement but he is dangerous when so many people feel so let down by their politicians that they could risk all and vote for a party that has no politics and that only preaches prejudice and fear.

The two main political parties in the UK have failed us over Europe. Divided amongst themselves, they have shrunk from rocking the boat by insisting on the importance of Britain being in the European Union and the pro-European Liberals have been sunk by their often under-rated and heroic role in diluting some of the worst extremes of Conservative politics. It will be a tragedy if Britain’s liberal voice is silenced.

There is no point just blaming Nigel when the pattern is so obviously been repeated across Europe with Neo-Fascist parties triumphing in too many countries for us to ignore the reality of this bleak moment in European history.

When I was a student, some years ago, I knew two respectable and, I thought liberal-minded ladies, sisters straight out of an Agatha Christie novel, who ran a music shop in Marylebone High Street, London. On one occasion I was there buying a book of Italian songs when a group of young people walked by eating sandwiches and drinking Coca-Cola from cans. One of the ladies tutted and said it was a depressing sight seeing the way society was going.  She asked why these lads had to eat immediately after buying those sandwiches and why they couldn’t wait until they got home. She said that we would learn to regret a society that got used to instant gratification. Europe has been through a truly serious economic crisis and life has been tough right across the World. In Europe this week, in England, in Lewes, people have voted for instant gratification: no more austerity, no more complicated solutions, no more global responsibilities. Europe has voted for that easily swallowed sandwich and, if not a can of Coca-Cola, then a comforting pint down the pub with Nigel Farage.

I truly hope that any responsible electorate will learn the error of its ways in time for next year’s General Elections. If not where does a weird guy like me go to live?