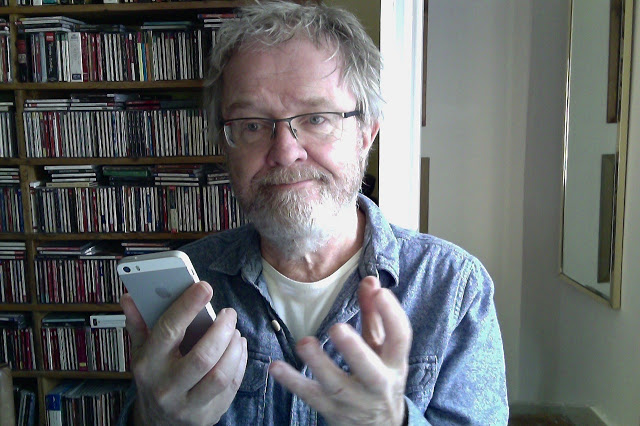 I’ve had a lot of fun with the new technologies that have revolutionised our lives over the last twenty years or so. I’ve recently been marking anniversaries (big ones) celebrating early online networking platforms and the strange virtual realities of so-called games like Second Life. Actually I was also celebrating good friendships formed over the years with folk I first met in a weirdly improbable coming together through the ether.

It has had its frustrations too, this modern technology. OK, I admit it, I’ve often learnt the hard way, crashing, deleting and sometimes offending by my self-taught gallop into the 21st century.

Last February, I discovered the wonderful world of Instagram where you can take photographs with your phone, write something, hopefully, pithy, and post/publish your thoughts instantly. I’ve loved it and posted almost every day onto the site where I could also see other people’s attempts at instant creativity. I’ve enjoyed the experience and have been inspired by the idea of photographing something everyday – some observation from around the house, in the garden, down the road or whatever. It has taught me that you can always come up with a new thought even if you, like me, often spend time alone in a little room with a computer.  Well, my joy in Instagram came to a bumpy end yesterday – a temporary one, I hope.

It was early morning, my phone was by my bed, I know, don’t tell me, I fumbled for it to find out the time and then noticed a message from Instagram to verify my password because I needed the extra security, apparently. I know it would have been wiser to have reacted to this after breakfast, or at least when I was more awake. Sadly, I’m not that kind of guy. No, it was straight in – click, click, whoops, click click, whoops. Then my Instagram account changed in front of my eyes. I was now the proud owner of a new account and, yes, I’m sure everyone else out there will know this, yes, my old account had been deleted.

I don’t think we humans  ever had this very specific kind of frustration until the invention of the computer. You know what I mean. It’s the utter helplessness of total and permanent deletion. It’s like death but there are no cyber gods to pray to for deliverance. I went to the Instagram site and convinced myself by reading their attempts at calming words that there was absolutely nothing that I could do to retrieve all those photographs and, by then, my 200 followers who appeared to like them. We know it’s frustrating, Instagram says on its site. You’re not wrong there, mate. It’s important to guard accounts against hackers. Well, yes, we humans are great at inventing new wonders and then moving on to invent ways of turning them into ways of stealing from other human beings. I suspect the invention of the wheel soon led to more sophisticated robberies. Anyway, knowing that I was totally helpless was its own therapy.

I was now no longer user name colinbellwolfiewolfgang and where I had been was now silence. I made a radical change of name and became wolfiewolfgangcolinbell. I know, it all sounds so trivial. There it was my new account. A new name, no photographs and no followers. Tabula rasa. The sad thing was that I was excited by the possibilities.

Then I remembered, in a flash of genius, that I had customarily shared my Instagram posts with those other networking sites Facebook and Twitter and then, after breakfast now, starting to retrieve my old posts. I worked at this all day long, like a man obsessed.  Surely you could have done something more useful, I hear you say, You are right, I know, but I just didn’t want to let go.

After reposting 115 of my photographs with their original texts, I felt terrific – I was winning. Then Instagram stopped me posting anything else. There is a limit apparently to how many photographs you can post in 24 hours – I’m assuming it’s 115. this is to stop unscrupulous people swamping the site with spam. Well, that’s human nature as well. So I will have to carry on with the process more gradually. Less obsessively too which is a good thing.

I was touched when I looked at my profile page last night and found that already 59 people, either old followers or new ones, had visited the site along with a whole lot more just casual visitors. It felt good again – a small victory against the night.

So I’m back and when I have restored the site to the best of my abilities, I shall return to the hugely enjoyable habit of trying to come up with a new photograph every day no matter where I am or how unpromising the situation. I’d love it if you shared this with me and came to visit me there. I’m now wolfiewolfgangcolinbell and here’s the link: 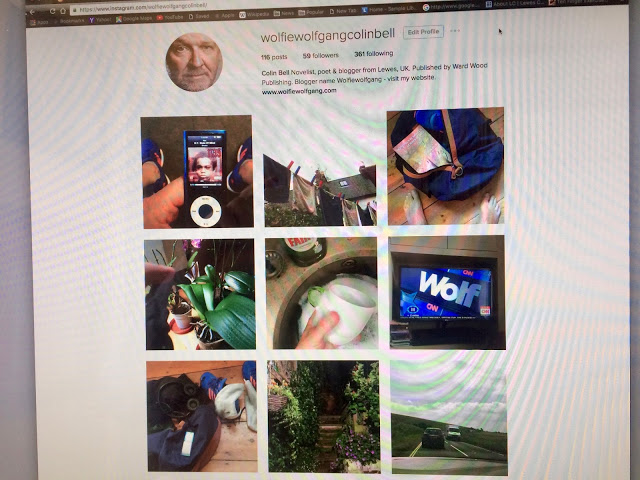 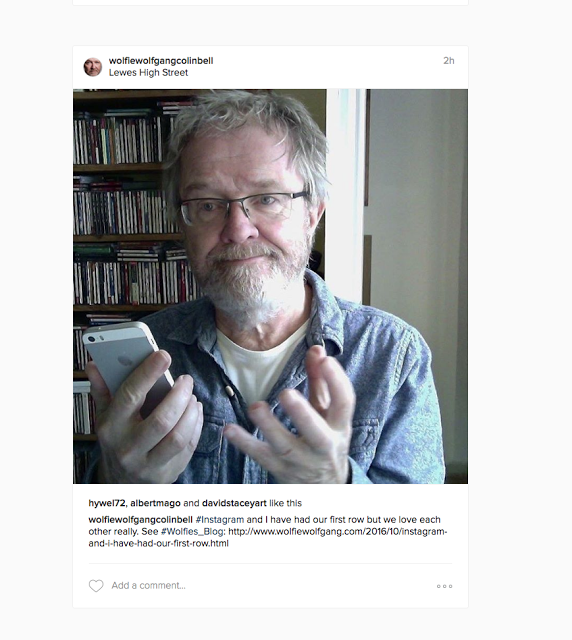