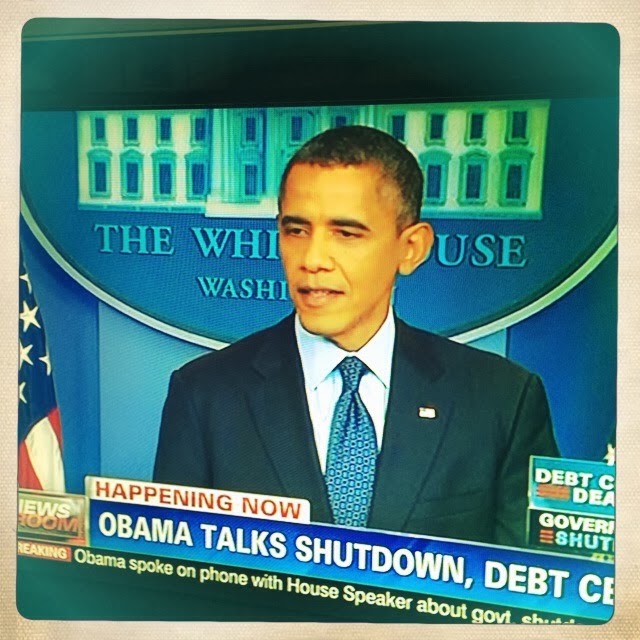 Watching (and listening to) President Obama’s press conference yesterday, I was amazed and enlightened. For us simple Brits it seems incredible that the mighty nation that is the United States
could risk defaulting on its debts just because the two opposing political parties can’t come to an agreement on the standard procedure of voting through the funds (that they have) to pay for already agreed expenses from last year. It seemed like madness to me but then I realised that this is all a game of politics – silly me!

I was grateful to President Obama for explaining the meaning of  the mysterious term Raising Debt Ceiling. I thought along with a lot of other ignorant non-Americans that raising the debt ceiling meant increasing the debt but it doesn’t. I could understand if this furious debate was all about how much debt the country could take – we in Britain know all about the dreaded deficit. Here in the UK, our Chancellor of the Exchequer, George Osborne, is celebrating knocking a third off the British deficit incurred by the international financial crisis of 2008 – a pyrrhic victory perhaps when you see the bleak consequences of his policies that demand that the have-nots pay more than their share to bail out the debt mounted because of the callous and foolish behaviour of international financiers. Barrack Obama has pursued a policy similar to the one advocated by Britain’s last and under-regarded Prime Minister, Gordon Brown and he can top Osborne’s claim by telling his nation that he has halved the American deficit without risking industrial and manufacturing collapse.

No, this row isn’t anything to do with debt. Raising the Debt Ceiling means Congressional authorising the American Treasury to raise the funds. already in their coffers, to pay for democratically agreed government spending.  So why are the Republicans making such a fuss about it and why do they want to risk another international economic crash?

It’s politics, dear readers! The Republicans, or at least the most militant and rabid members of the Grand Old Party, worked out that they could blackmail the President by scaring him into a situation where he can only pass this essential Raising The Debt Ceiling with their support which, they say, they will not give unless he agrees to change a number of unrelated policies such as his controversial medical aid legislation. Basically, it’s a trick and a rather shabby one at that.

Meanwhile average Americans are worrying about their bank accounts, their mortgages and the price of food and the government has had to temporarily close government offices. You can’t even ring the White House because the switchboard has been suspended.

This is the United States of America, the richest nation on Earth,  risking an international economic disaster and tarnishing its reputation all because a cheap political trick. Shame on you Republican Party – good luck to you President Obama. I hope sincerely that you will succeed in seeing off this threat. Selfishly, I’m concerned like citizens around the World, that it’s not just you Americans who will suffer if the Republicans push this over the brink. It will have consequences and repercussions everywhere. We will see you and American democracy differently, if you can’t get your act together.

…or from Amazon:
http://www.amazon.co.uk/s/ref=nb_sb_noss?url=search-alias%3Daps&field-keywords=Stephen%20Dearsley’s%20Summer%20Of%20love
0
9th October 2013
No Comments Yet