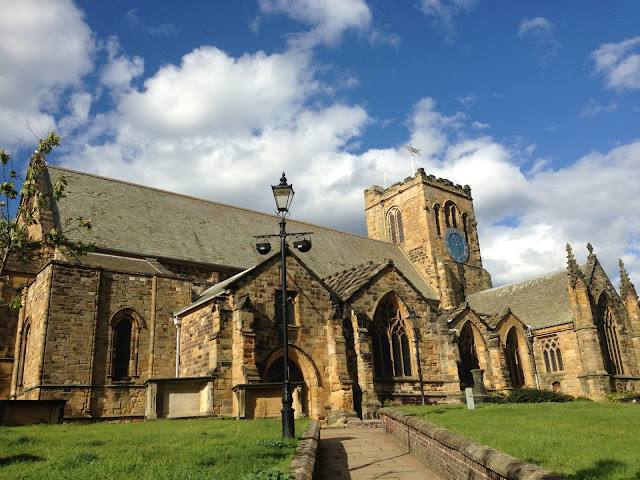 Even though I had visited Scarborough before, a few years ago, I realized on my recent trip there, that I knew very little about its history. To me it was all about being a prosperous Victorian seaside resort and, more recently, the home and artistic base of playwright Alan Ayckbourn. It was pleasant enough wondering around town looking at the architecture and I was especially drawn to the lovely 12th Century church of St Mary’s. It was only while wondering rather aimlessly through the graveyard there that I discovered Scarborough’s connection to that most famous of literary families, the Brontës. 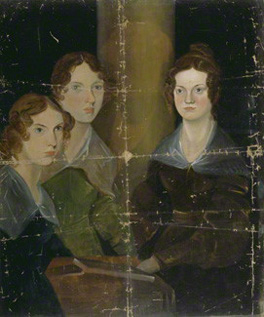 Charlotte (1816- 1855), Emily (1818-1848) and Anne Brontë (1820 – 1849) grew up together in their vicar father’s Yorkshire parsonage at Haworth  – now the Brontë Parsonage Museum
http://www.bronte.org.uk/default.aspx  – where all three sisters wrote novels that have become classics of Nineteenth Century literature:  Jane Eyre (Charlotte), Wuthering Heights (Emily) and  Agnes Grey (Anne),  all, remarkably, published in 1847. 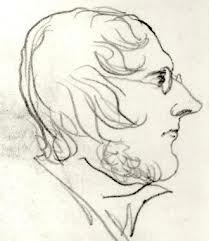 The following year, first their dissipated alcoholic brother Branwell (1817 -1848) died (possibly from tuberculosis) followed shortly by the death of Emily (also from tuberculosis). Their two elder sisters, Maria and Elizabeth had died from the disease as children and soon after Emily’s death, it was obvious that Anne Brontë had also contracted the disease that was not considered contagious at that time.  She had just published her second and best known novel, The Tenant of Wildfell Hall. 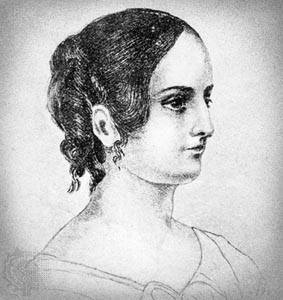 Anne Brontë, like her siblings wrote poetry as well as novels, some of it reflects her 19th Century piety while others express the Brontë family’s Romanticism:

I love the silent hour of night,
For blissful dreams may then arise,
Revealing to my charmed sight
What may not bless my waking eyes!
And then a voice may meet my ear
That death has silenced long ago;
And hope and rapture may appear
Instead of solitude and woe.

Cold in the grave for years has lain
The form it was my bliss to see,
And only dreams can bring again
The darling of my heart to me.

Anne, like her sisters, was a strong character who had worked as a governess (as had Charlotte) and had holidayed with her employers at the then highly fashionable seaside resort of Scarborough. When her tuberculosis reached its critical stage, she decided that good clean Scarborough seaside air might alleviate the condition so it was decided that she would return there with sister Charlotte in the hope of a cure. 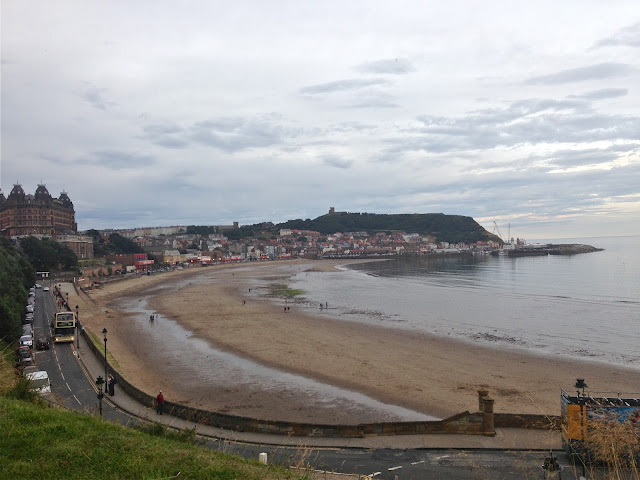 On the 24th May, 1849, they travelled to Scarborough to stay in a building known as Wood’s Lodgings on the site of what is now the town’s aptly named Grand Hotel. Four days later, on 28th May, 1849, Anne died there. 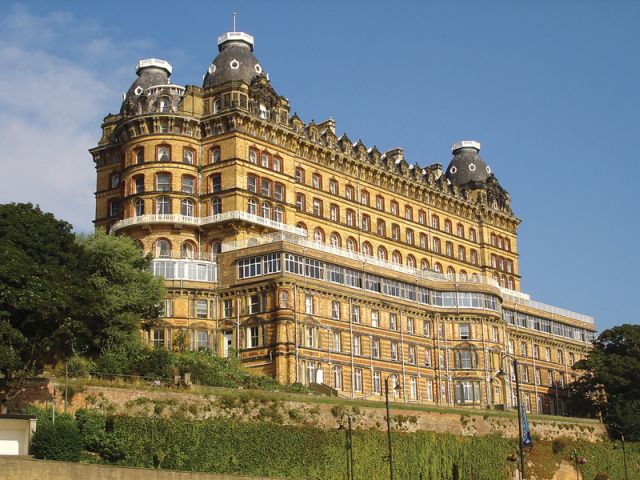 I am grateful to two of this blog’s readers, Mark Oliver and Helen Matthews,  for correcting my original mistake in thinking that Anne actually died in the Grand Hotel which, of course, wasn’t opened until 1867. Mark also drew my attention to an excellent  blog by Michael Armitage to whom I am also indebted. 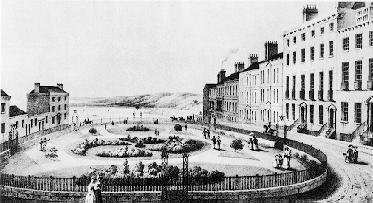 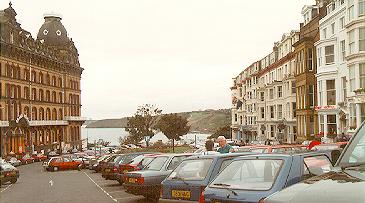 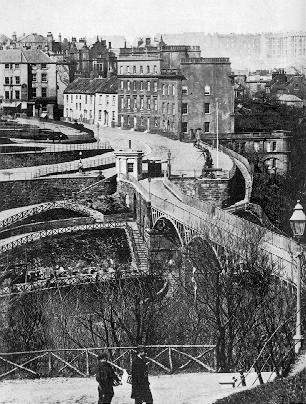 Wood’s Lodgings consisted of all the buildings on the right of the photograph, including the low light coloured houses – Anne may have occupied rooms with sea views at either end of the complex. 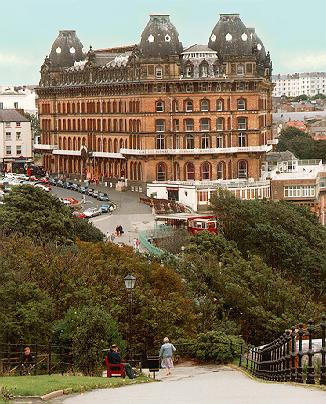 The Grand Hotel on the site of Wood’s Lodgings 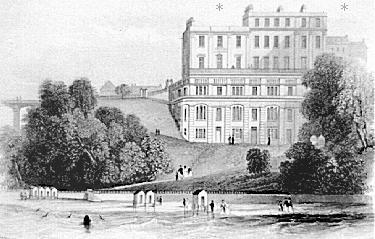 Wood’s Lodgings as seen from the sea.
Charlotte decided that Anne should be buried in Scarborough – to “lay the flower where it had fallen” – so that Anne is the only member of the family not to be buried in Howarth churchyard. 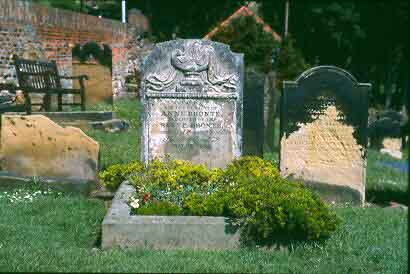 Charlotte designed the headstone but discovered the following year that it had a number of errors so she ordered it to be re-carved. It still reads incorrectly claiming that Anne was 28 years old when she was in fact 29. Charlotte, who was writing her novel Shirley at the time, lost Branwell, Emily and Anne within the space 8 months and she herself would die only six years later in childbirth. 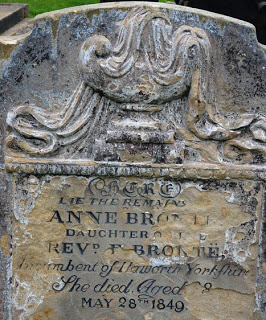 It is difficult seeing the grave there in Scarborough without mourning all over again for those three remarkable writers all cut off in their prime. 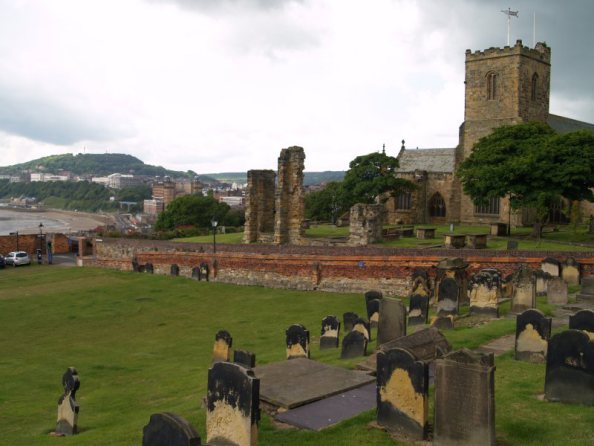 I doubt if it was any consolation for Anne but Charlotte must have found some comfort knowing that her sister lies buried in such a romantic spot with the sea and the Yorkshire Moors in clear view from the graveyard. Remembering one of Anne’s poems, I like to think she would have appreciated the place too.

Lines Composed in a Wood on a Windy Day

My soul is awakened, my spirit is soaring
And carried aloft on the wings of the breeze;
For above and around me the wild wind is roaring,
Arousing to rapture the earth and the seas.
The long withered grass in the sunshine is glancing,
The bare trees are tossing their branches on high;
The dead leaves, beneath them, are merrily dancing,
The white clouds are scudding across the blue sky.

For a time Anne Brontë was regarded as a lesser figure than her two famous sisters but now her reputation stands high and her novel The Tenant of Wildfell Hall is seen as a pioneering work of Feminist literature as well as being a radical and, at the time, shockingly honest account of a woman’s life at the mercy of masculine debauchery and alcoholism. If you haven’t read it, then maybe now is the time. You should read Agnes Grey too. 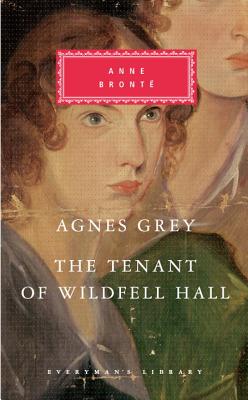 Here is a link to Michael Armitage’s excellent blog about Anne Brontë’s Scarborough connection:
http://www.mick-armitage.staff.shef.ac.uk/anne/bronte.html#scarbro index
If you want a quick taster, here’s the opening of the BBC’s 1996 dramatisation of The Tenant of Wildfell Hall starring Tara Fitzgerald, Toby Stephens and Rupert Graves.
0
3rd September 2013
No Comments Yet