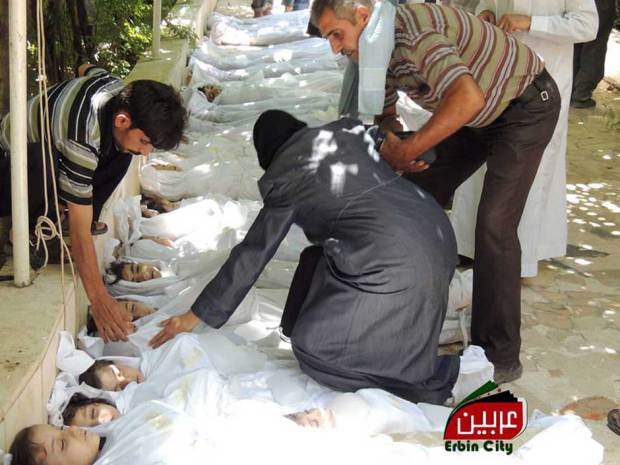 I wouldn’t consider myself a pacifist. I believe that the Second World War was an inescapable necessity after Adolf Hitler began his campaign of genocide. I did, though, go on two anti-war marches. First against the Vietnam War and then against the Iraq War. I know that if a wild-eyed man/woman with a knife tries to stab me or someone innocent person near me, reciprocal violence might be the only solution but if I heard screams from the house nextdoor, it’s usually unwise to break the door down and rush in firing a gun. Violence is not the best solution to problems even if, in extreme situations, it becomes inevitable.

I have struggled with this problem over the last week after seeing the distressing photographs coming out of Syria but my despair is nothing compared to the agony experienced by the Syrian people.

Do we know if those deaths were caused by chemical weapons?

Do we know, if they were used, who used them?

Do we have the right to take military action against  another country without a United Nations mandate?

Is it a worse death dying from chemical weapons than dying from napalm or, for that matter, from a high velocity shot gun?

Can we draw a distinction between the different techniques an out-of-control government  uses to kill its citizens?

Should all weapons of destruction, mass or not, be illegal?

Should the United Nations outlaw all violence perpetuated against any country’s citizens?

After Iraq, should anyone believe what governments say is evidence of mass destruction?

Why do the hundreds of highly paid diplomats get paid at all if their governments think that military intervention is the only answer to international crises?

How is it possible for a small economically insignificant country to kill over one hundred thousand of its citizens without the World’s economic power-brokers finding an economic/diplomatic imperative to end the violence?

Is violence really the only answer?

What can we do to stop the killing?