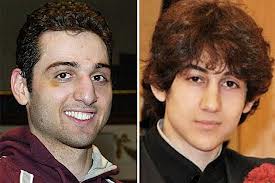 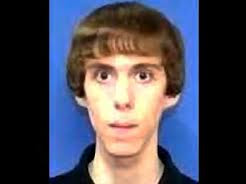 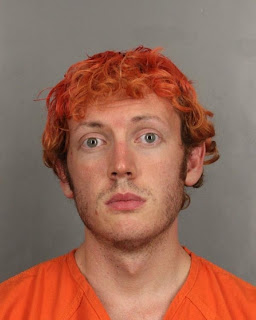 James Holmes
Guns and exploding pressure cookers – where there’s a wacky deranged fantasist, a crazed religious fanatic or a cowardly terrorist, there’s danger for ordinary people on the streets. It doesn’t have to be in the USA, look at all the people who have been gunned down or blown up on the streets of London, Birmingham, Baghdad and Moscow, to say nothing of Northern Ireland, Africa and the Middle East. Americans,  though, seem to have an unfair share of death by weirdly motivated and displaced young men. The American Congress can’t even get its act together to tackle gun sales so there’s not much they can do about pressure cookers and nails or the ingredients that went to creating the Boston bombs. It is even harder to spot young men’s brains going into melt-down. It appears to be so easy to do terrible things to people as they go about their daily lives. To gun down little children at school or to blow them up on a day out with their families. It’s easy because, for the rest of us, it’s unthinkable. It is not just our lives but it’s our freedom that’s at risk. Our security, more and more, depends on all of us being watched by the state. It would be better, perhaps, if we could all lend a hand. Societies all over the World need to keep an eye open for weird behaviour, signs of psychological disturbance and, most difficult of all, signs of naive young men and women being carried away by the crazy preachings of religious fanatics or the cowardly and wild-eyed false heroics of back-room revolutionaries. Sure, we should control those guns but we have an even bigger  job on our hands if we are to spot and, hopefully, help, these sad, pathetic, misled, troubled but also dangerous kids on the block somewhere near you.
1
24th April 2013
1 Comment