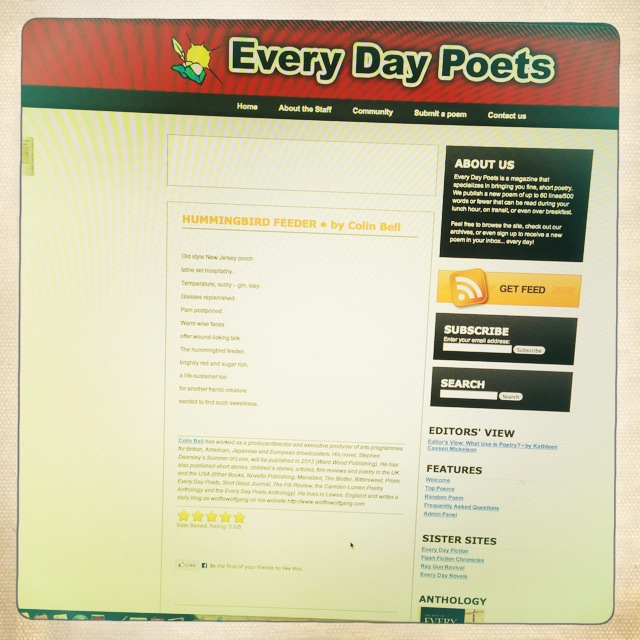 Today is all about poetry. My latest poem, Hummingbird Feeder is published by Every Day Poets,
http://www.everydaypoets.com/  that great and enterprising on-line poetry journal that publishes a new poem every day of the year. This is my second poem they have published this year, so thanks again Every Day Poets. You can read it if you go to this site http://www.everydaypoets.com/ – you can vote for it too if you want. 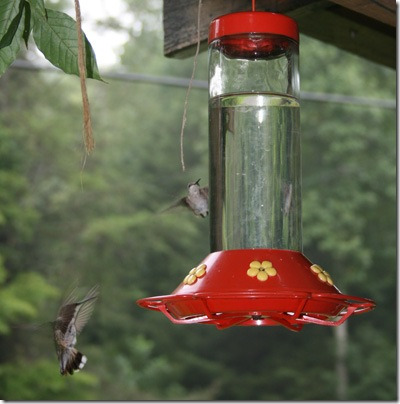 The poem was written after a trip I made to rural New Jersey, USA, in the summer of 2011. I had a great time discovering that New Jersey isn’t just the home, on the wrong side of the river from New York,  of mafioso bosses like Tony Soprano and other unsavoury members of the criminal elite.  In fact it is a lushly beautiful state and, when I was there, in early July, hot enough without being overwhelmingly humid. Exotic enough though for an Englishman used to temperate climes. One of the most exotic and unexpected pleasures of that trip was my first encounters with hummingbirds who are plentiful in those parts and who are fed in New Jersey gardens with a sugary liquid dispensed  from bright red feeders that are often strung from those other characteristic NJ features, the porch in front of the house. These feeders are garishly red and usually made from plastic – I hadn’t seen anything like it before. They have to be this colour to attract the hummingbirds who are genetically programmed to feed from brightly coloured tropical flowers. I was amazed by these tiny birds, much smaller than I had imagined them and also much faster moving. Frantic in fact to feed whilst their wings flutter manically keeping them in position. Their frenzy was what led me to write the poem. 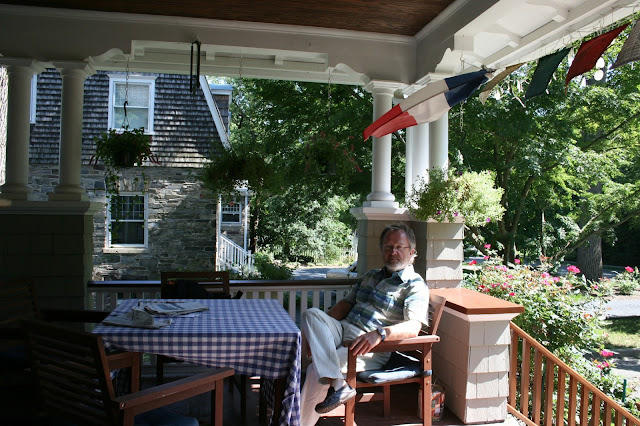 I had watched them up close on the porches of various friends houses during my stay and felt that it was not only the hummingbirds were receiving New Jersey hospitality. I hope you enjoy the poem. I shall read it tonight at the Fifth Anniversary gathering of Lewes Poetry, a group that meets in the pub just round the corner from my house. 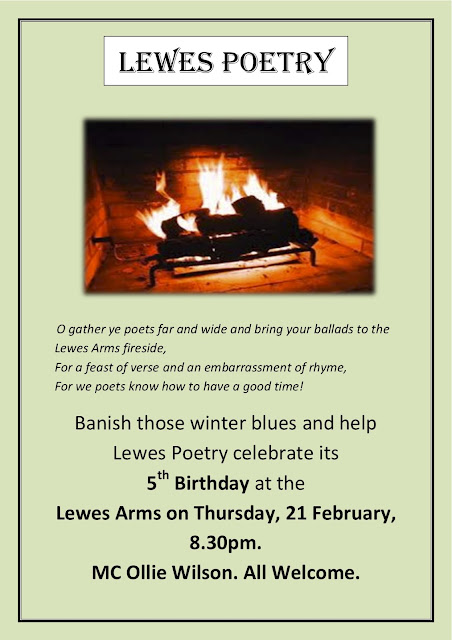 It is also the venue of my first public poetry reading when, beardless after my hospital stay, I was still in the early stages of recovering from my brain haemorrhage and learning to live with the stammer that was one of its side effects. 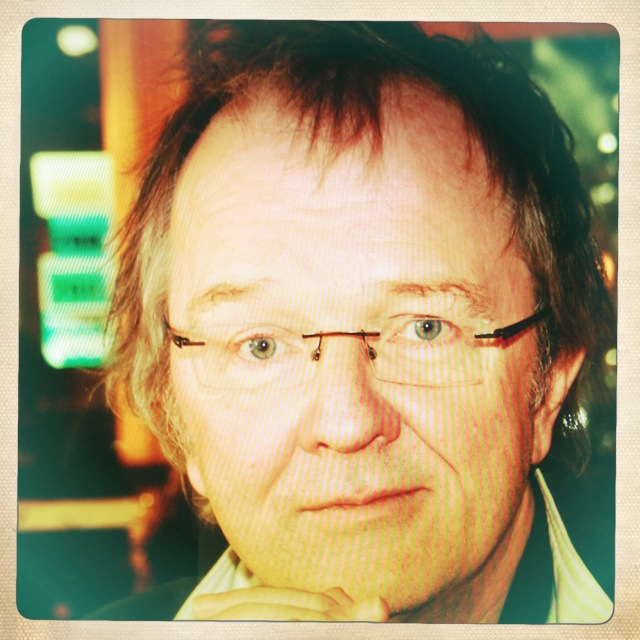 I was persuaded by a friend to go along to Lewes Poetry’s next meet because it was a mix of well-known featured poets and ordinary newbie poets like me, reading in an ‘open mic’ section. I was very unsure if my stammer would let me read and I also wondered if my poetry was good enough to risk a public outing. 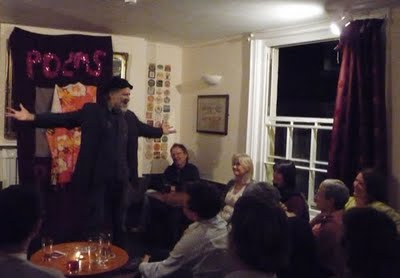 I arrived, armed with a file of poems and was told at the door that there wasn’t any open mic that night because it was a special event featuring the well-known poet John Agard, last year’s winner of the Queen’s Gold Medal for Poetry. I was about to run away and hide but the organisers felt sorry for me and said they would try to find a slot for me to read. So what would have been nerve-wracking enough anyway now became a moment of terror as I realized that I was being thrown into such distinguished company. I survived and my stammer behaved as it now always does when I read poetry. I also learnt a lot from seeing John Agard’s dramatic delivery style. As I sat listening to his funny and furious poems, I thought I have to try and make my readings performances in some way even if I can never match his unique delivery.

So thank you Lewes Poetry for giving me the chance and for making it such a memorable one too. If you’re anywhere near Lewes tonight, come along and celebrate a great Lewes event.

Last night was another performance moment in my family and I was in Brighton for the debut gig of Adam Bell’s new band Octopuses. His old band, Foxes! is hibernating for a while but Octopuses opened a new chapter in Adam’s musical life with songs that are more thrustingly masculine but was also wryly humourous and witty, dramatic, studiedly self-concious and, yes, wiser about life. I was very proud of him and his musical colleagues. 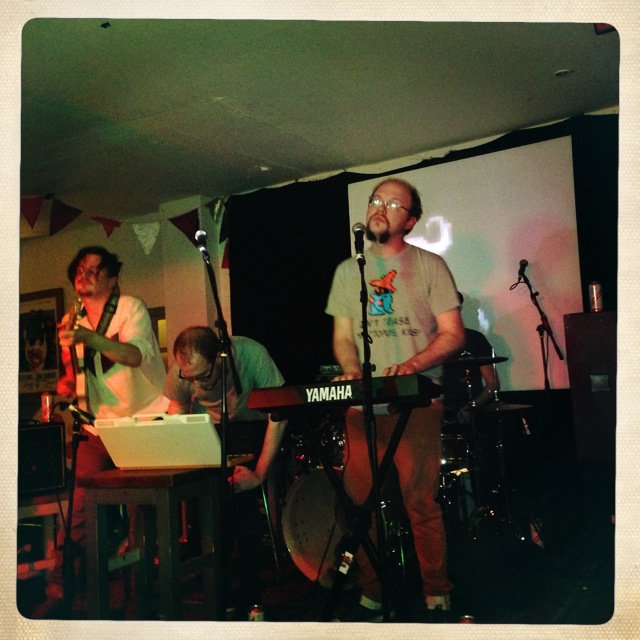