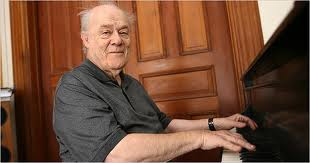 There’s been a depressing cull of people that I’ve admired over the last week, Dave Brubeck and then Charles Rosen and as I write this I hear that the inspiring Indian musician Ravi Shankar has also died. We are the poorer for the departure of all three of these gents.

Charles Rosen (1927-2012) may have been less famous that the other two but then musicologists aren’t always headline news even though Charles Rosen, my favourite writer on classical music, had a much broader talent than that. He was, unusually for a musician, a genuinely broad-based intellectual –  a philosopher, a linguist, a talented cook and a wittily human man. He was also a virtuoso pianist taught by a student of Liszt – maybe not of the first rank but thrilling in Debussy and wonderfully clear in Bach and keyboard-informed when he wrote about any of the great composers whose works he understood not just with his brain but also with his fingers. Unusually too for a music pundit, he knew what he was talking about and he could say it memorably with an almost tabloid ability for catchy phrases in a field where many writers of music disappear into a convoluted and unwelcoming musicological version of the Arizona desert.

I can never listen to the music of Haydn, Mozart and Beethoven without thinking of Charles Rosen and, if you haven’t yet discovered the glories of Haydn’s String Quartets or Mozart’s String Quintets then after reading his The Classical Style (1971/2005 Faber & Faber), you’ll soon see why they should be essential listening to anyone who loves music. He is terrific too on that old bug-bear taught mostly so boringly, if at all, Sonata Form, the basic blueprint of the Classical style. For me, like those mathematical tables, the elements of Sonata form were drummed into me at school: Exposition, Development and Recapitulation with all the appropriate harmonic changes essential to the language. It was Charles Rosen though who said what should have been obvious, that Haydn, Mozart and Beethoven had never heard of the term and for them it was merely a living set of techniques that freed them to express themselves as they wished…”not a definite form like a minuet, a da capo aria, or a French overture; it is, like the fugue, a way of writing, a feeling for proportion, direction, and texture rather than a pattern.”

He devotes another of his books to a full development of his thoughts on this often arid idea of sonata form – its importance to the great classical composers but also its destructive influence on the struggling composers that tried to carry on the “tradition” –  Sonata Forms (1988, W. W. Norton & Company)

I was similarly inspired by using his book Beethoven’s Piano Sonatas (2002, Yale) as my guide through these formidable works even the ones that I thought I knew well after learning to play them at school and music college.

His wittily acerbic opinion about playing the Beethoven sonatas on instruments from Beethoven’s own era is typical of the man and instructive about the profound nature of the struggle within the sonatas themselves:


“More than any other composer before him, Beethoven understood the pathos of the gap between idea and realisation, and the sense of strain put on the listener’s imagination is essential here. The best argument for using the pianos of Beethoven’s time in place of the modern grand piano is not the aptness of the old instruments but their greater inadequacy for realising such an effect, and consequently the more dramatic effort required of the listener. The modern piano, however, is sufficiently inadequate to convey Beethoven’s intentions.”

As some of this blogsite’s readers might remember, I have been on a self-propelled journey through the history of classical music, listening to it in strict chronological order starting some twelve years ago in the year 1100 and currently reaching 1877. I was not alone during the early 19th. Century though because, as through the classical period,  I had Mr Rosen as my guide – The Romantic Generation (1998, Harvard University Press) – his book on the great Romantic composers Schubert, Schumann, Chopin, Mendelssohn, Bellini, Liszt, and Berlioz. He opened my eyes to the greatness of Chopin that lies underneath the most easily appreciated aspects of his most beautiful music. I now hear the complexity of his counterpoint and the originality of his harmony and appreciate Chopin as one of the very greatest masters, with Schumann, of the post Schubert period. He allowed me to struggle less with Schumann’s later music too after years of trying to tell myself that it was as inspired as the great piano suites and song cycles from earlier in his life. Charles Rosen puts the earlier music at the peak of 19th Century achievement but takes a sterner view of the symphonies and concertos that suffer from the composer’s willful use of, yes, sonata form. He is a fan of one of my favourite opera composers too – the limpidly gorgeous vocal lines written by Vincenzo Bellini. He is tough on Mendelssohn after that composer’s glorious early bloom. He made me feel much less guilty about being bored by Mendelssohn’s oratorios too: “Mendelssohn is the inventor of religious kitsch in music which does not comfort, but only makes us comfortable.” Charles Rosen sees through the insecurities and confusion that these composers faced living after Beethoven and his favourite music from the Romantic era avoids comparison with the great man when it tries to do different things like Schumann’s miniaturism in song, his and Chopin’s piano music and early Liszt too: “Liszt’s late works are admirable and minor; the early works are vulgar and great.” Yet again, Charles Rosen made me feel better about myself as I had always been admirer of those barn-stormingly vulgar piano showpieces that made Liszt the creator of the modern piano. I feel freer to continue thinking that vulgarity is much underestimated in art but Rosen sees through some of Berlioz’ accesses and draws our attention to his essence, the poignantly sensitive composer of introspection: “It is not Berlioz’s oddity, but his normality, his ordinariness, that make him great.”

Ideally, music should be self-explanator, mostly abstract and personal to each listener but it is also, in the greatest hands, complex and, yes, difficult. It would be foolish of any of us to try to go it alone when there is someone like Charles Rosen to help us on our way. I owe him a debt of thanks but, like many others, I will never forget him as long as I listen to music.
It was good to see him being recognised by President Obama earlier this year when he was awarded the National Humanities Medal. 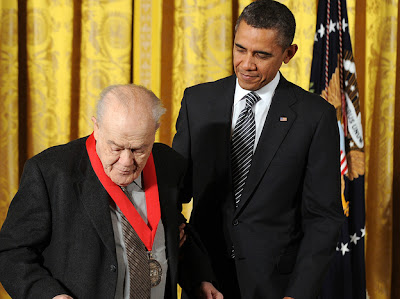 Now, no sonata form here nor any of those Romantics. Let’s leave him playing Bach – it’s the sound of a very clever, clear-sighted brain in action:
0
12th December 2012
No Comments Yet