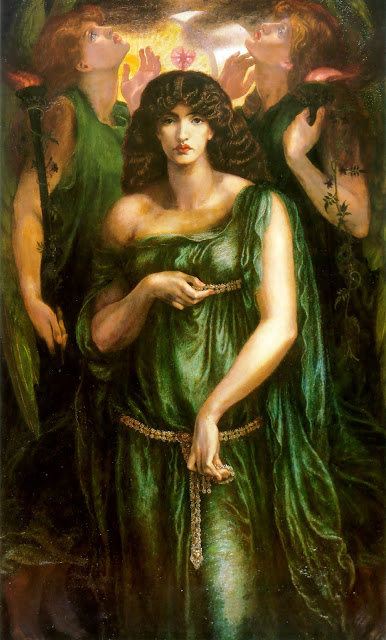 I went to the  “Pre-Raphaelites, Victorian Avant-Garde,” Tate Britain’s Pre-Raphaelite exhibition last weekend and the face that stays with me is that of Jane Morris, the wife of William Morris, the artist and textile designer who was one of the younger members of the Pre-Raphaelites. she was also, probably, the mistress of Gabriel Dante Rossetti, one of the founding members of the Pre-Raphaelite Brotherhood and, one of its most influential theorists too in creating the school of painting that mixed modern day realism with pre-Renaissance symbolism. Unwittingly, he also inspired “the look” that wowed Bohemian London in the second half of the 19th Century, a look that is still emulated today. Looking at her paintings, it is not difficult to see why. Jane Morris modeled for both artists, remained married to William but also friends with Rossetti who, in a series of sensationally languid paintings, immortalised this mysteriously alluring woman. Rossetti was also inspired to write poetry about the woman who was one of  “The” faces of the late 19th. Century. His poem Astarte Syriaca, a companion piece to his painting of the same name, is about the Syrian Goddess equivalent of the classical goddess Venus.

Mystery: lo! betwixt the sun and moon
Astarte of the Syrians: Venus Queen
Ere Aphrodite was. In silver sheen
Her twofold girdle clasps the infinite boon
Of bliss of the heaven and earth commune:
And from her neck’s inclining flower-stem lean
Love-freighted lips and absolute eyes that wean
The pulse of hearts to the spheres’ dominant tune.

Torch-bearing, her sweet ministers compel
All thrones of light beyond the sky and sea
The witnesses of Beauty’s face to be:
That face, of Love’s all-penetrative spell
Amulet, talisman, and oracle,
Betwixt the sun and moon a mystery. 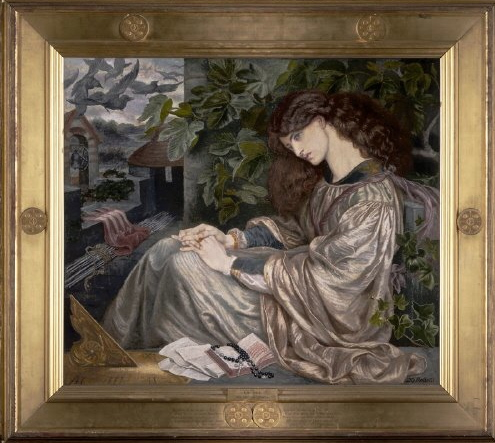 Jane Morris appears again throughout the Tate’s exhibition but, another of my favourites is Rossetti’s La Pia, based on the story, in Dante’s Purgatorio, of the sad woman, ill-treated by her husband, who died without absolution and thus, in Dante’s rather unforgiving world view, has to languish in Purgatory. It was a role ideally suited to Jane’s melancholy and to Rossetti’s love of ethereal femininity – ethereal with a large dose of sensuality. Rossetti seems to have realized that he was giving Jane a form of immortality when he wrote about one of his portraits of her. He wasn’t wrong.


From The Portrait by Dante Gabriel Rossetti

This is her picture as she was:
It seems a thing to wonder on,
As though mine image in the glass
Should tarry when myself am gone.
I gaze until she seems to stir,—
Until mine eyes almost aver
That now, even now, the sweet lips part
To breathe the words of the sweet heart:—
And yet the earth is over her. 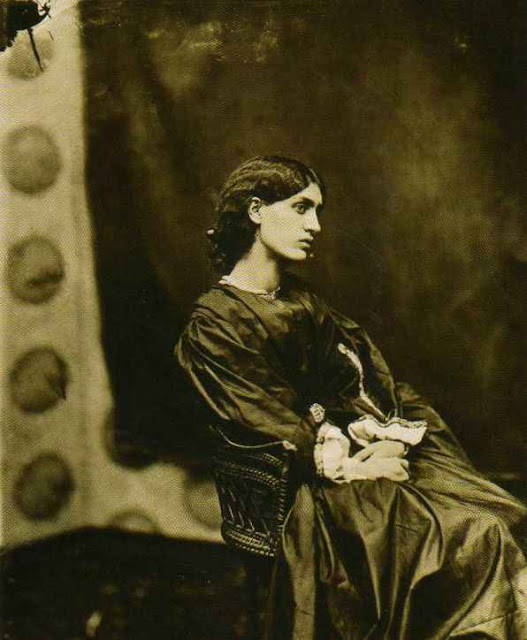 Jane was born into a working class family in Oxford and was “discovered” by Rossetti and his young friend Edward Burne-Jones and asked to model for them. She modelled too for William Morris who fell in love and married her. Married to Morris, she began her education and became a skilled linguist

(French and Italian) and an accomplished pianist with a wide knowledge of classical music. She was “My Fair Lady” and might well have been George Bernard Shaw’s model for his play Pygmalion. As her photograph shows, her beauty was not exaggerated in those Pre-Raphaelite paintings. She is definitely the Queen of the Tate show. 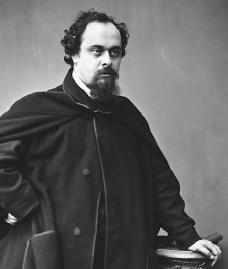 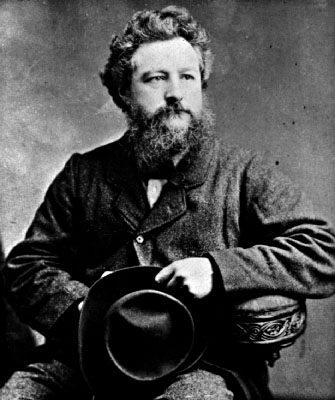 Be sure not to miss the William Morris section at the exhibition and try to resist the snooty temptation to rate his carpets and fabrics any less than the oil paintings in the other rooms. This carpet,  the Peacock and Bird Carpet, is worth the visit in itself. It sits next to some of Edward Burne-Jones most inspired tapestries and stained glass. Those Pre-Raphaelites were multi-talented. I wonder if Jane ever got to lie on William’s carpet. 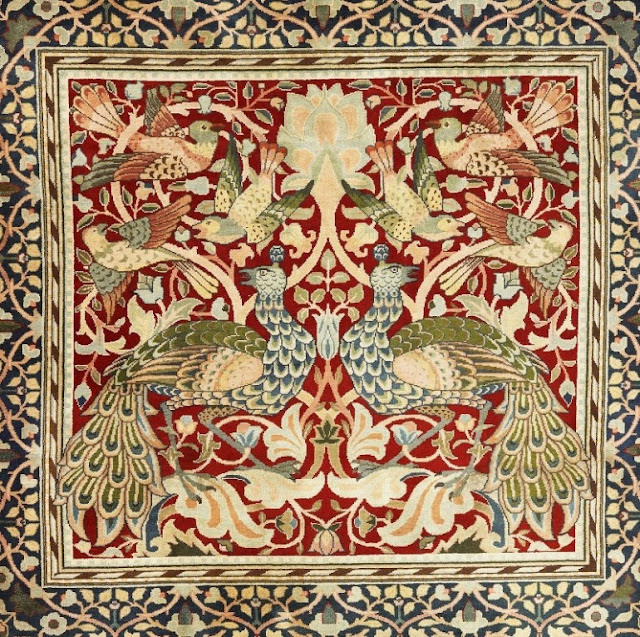