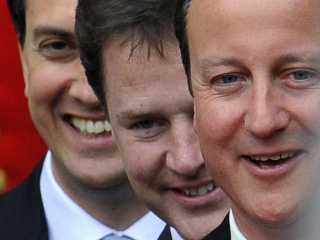 So, OK, Ed went to a comprehensive school, Nick is sorry and Dave’s just a regular guy. It is all true I”m sure but I think we have heard all this before. They are perfectly decent blokes I suspect, our political party leaders here in the UK, Dave Cameron, Nick Clegg and Ed Milliband. I wouldn’t suggest sending any of them to Madame Guillotine or even to a Siberian salt mine but…..

…… it’s political conference time here in Britain We’ve had Labour and the Lib Dems and this week it is the Conservatives’ turn.

Now I’ve always been interested in politics. I acknowledge that we all have a responsibility to take it seriously – it is what democracy is all about. We need to decide who we support and vote for them but…..

…but what is it about these men, these nice blokes? Why am I so bored by them? Bored by what they have to say and bored by the fact that they are just saying what they think will trick me into voting for them.

I’m bored with being manipulated, by being talked at, marketed, seduced and tricked by these smooth tongued men and their army of PR advisers.

Maybe it is time to switch off the news and close the newspapers until these men wind up their PR events.

I know I am wrong to think this but, Ed, Nick and Dave, you bore the pants off me.