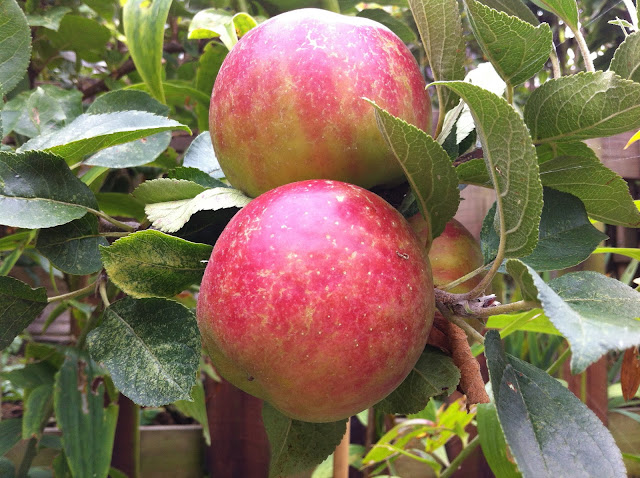 My small apple tree here in my Lewes garden has finally offered up these deliciously tempting fruits as August and Summer begins to wave us goodbye. The fruit, variety Croquella, is an early herald for Autumn and its rosiness tempers my regret for season’s end especially after this very disappointing English Summer.

A week ago, I was celebrating Summer at an alfresco dinner party in the countryside only a couple of miles from here. My indulgent friends insisted on me doing an impromptu poetry reading around the camp fire and this is one of the poems I read – I wrote it in 2009 and it was published in The Blotter magazine of November that year when my health was much frailer than it is today. It was originally written for a poetry exhibition on the subject of good and evil:

The Tale Of An Apple And A Sausage

My dog stole the sausage.
He knew it was wrong.
No, he knew I was cross.
Well, he knew I could hurt him.
He ate it anyway.
I ate the apple.
They gave it to me,
The naked couple, man and wife.
They got it from a snake
who knew just what they were like.
They knew it was wrong.
No, they knew there’d be trouble.
They ate it
anyway.
They felt the punishment
and so do we.
They got chucked out.
They lost out.
God’s pets
at play in the garden,
free from knowledge, understanding and pain.
I ate that apple.
It was OK,
juicy in parts with a bitter core.
Not what you expect
but no point in spitting it out.
©colinbell/wolfiewolfgang09/09/2009
2
28th August 2012
2 Comments