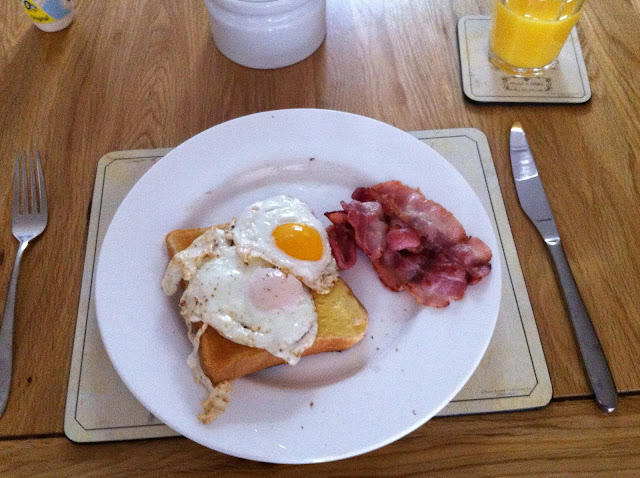 It wasn’t my fault. It seemed like a good idea at the time. I won’t do it again – well, not for a bit.

A friend donated some home-laid eggs from his young hens and they just wouldn’t wait and they were the perfect accompaniment to some left over bacon that had been bought for a posher and much healthier meal. Anyway, I am usually a muesli-breakfaster but, as Oscar Wilde said, I can resist anything except temptation.

I will have to compensate for the pleasure though.

If I confess then it might help my soul but the penance might have to be more vigorous than a few Hail Marys. I think I should go on a run.

Funnily enough, I had to run to the station the other day and arrived feeling refreshed and invigorated. I realized that I had missed running and thought I might take it up again.

Maybe I could pretend it was a penance when really I wanted to do it anyway.

I have always liked confessionals.

So, on to those Hail Marys. Appropriate I think after such an indulgent and fattening breakfast to make penance with the big man himself and another guilty pleasure. I’m talking Luciano Pavarotti of course  and his wonderfully sincere if sugary version of Ave Maria: the voice perfectly produced, the diction immaculate and the phrasing more glorious even than eggs and bacon. Have I just sinned again?