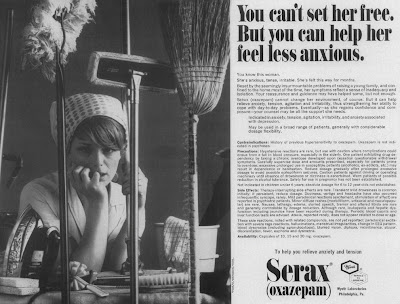 Times have moved on I guess since this advert dared show its face – then if the “little woman” was feeling anxious about her lot, her “big man” was advised just to stick a few pills in her. I was interested to see this old advert for Serax or oxazepam, because I have happy memories of benzodiazepine drugs myself – maybe too happy in fact.

When I was discharged from hospital in late 2008 after suffering a brain haemorrhage, I was living on a rich cocktail of prescribed drugs as well as the multiples of anti-seizure pills that I had to take by the handful every day. I had fractured my spine during the haemorrhage, don’t ask me or anyone else how because we will never know, so I was also supplied with a splendid supply of pain-killers including morphine tablets and diazepam, something not disimilar to the above-mentioned oxazepam – members of the same family of tranquillizers known as benzodiazepine.

I had particularly enjoyed taking liquid morphine in hospital – my whole body said “hello!” in the most over-excited way imaginable when I took my first sip. I was told by the doctors that I could have it on demand for pain relief so I took full advantage of it and soon, ill though I was, I was feeling just great. Hey nurse, where’s my morphine!

Diazepam was the other part of my feel-good treatment and it wasn’t long before I realized that I would be the envy of many a pill-crazed junkie out there beyond the hallowed walls of the hospital. The mix really did take me to somewhere-else-land.

When I returned home with my handy carrier bag full of controlled drugs, it was strangely unsettling seeing the scene of what might have been my last drama. I shall never remember the haemorrhage of course but I do remember the hours before my life went blank. It was late October and that morning I had set the fire for later, checked my emails and then, a bit like the poor woman in the photograph but without her anxiety, I got my broom and swept the wooden stairs down all three floors of my small Georgian terrace house here in Lewes, UK. Oddly reminded of this by the advert, I can remember feeling particularly cheerful that day, no little drudge me, sweeping the stairs and singing a cheerful ditty from an Italian opera – I certainly had no premonition of sudden death or the life-threatening condition that was about to descend on me. Neither did I think I would return to that house with pain-killers, tranquilizers and anti-seizure drugs.

As a recovering nicotine addict, I knew only too well that the joy that I received from that mix of morphine and diazepam was not the joy of riding a white horse over the hills or standing astride a surfboard over towering Atlantic waves. Against my doctor’s advice, I gave them up just before it was nearly too late. The pain was bad, that’s true, but my back is now back to normal and I can look at the advert above knowing that I no longer have even a twinge of temptation for those smart little pills.

I hope the woman up there with her brooms and mops found a happier way of escaping from her drudgery than the suggested narcotic escape. I advise caution before anyone risks forming a dependency on these cutely seductive tablets.