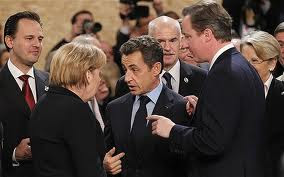 Yes, I know about the Euro crisis, I know that the “leaders”  of the Eurozone, Germany’s Angela Merkel and France’s Nicolas Sarkozy can’t quite agree yet on what to do about the currency crisis, I know too that I am not an economist but anyone with eyes to see can see that the British Prime Minister, David Cameron, is turning into the invisible man. 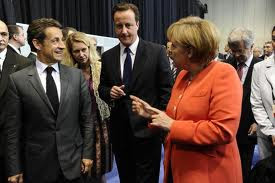 He has his problems not just with the new European leaders but also with the grumpiest and nastiest members of his own party, the Conservatives. In case you had forgotten, Europe is the great unmentionable as far as recent Conservative Party leaders are concerned. Divisions over Europe, split John Major’s government and then all those leaders that came and went quickly before nice Mr Cameron slid into the hot seat. Until recently Conservative etiquete was a bit like Basil Fawlty’s  “don’t mention the War” gag. Talk about anything else but don’t mention the fact that the party is riven down the middle on this issue. It is even worse for poor David because of his role as leader of a Coalition with the bright-eyed European enthusiasts, the Liberal Democrats keeping him in power. So once again the Conservatives are damned if they do and damned if they don’t over Europe.

In the meanwhile, France and Germany take the centre stage and, when all this money stuff is sorted – which will be sooner than many people predict – Europe will begin to recover and to turn itself into a shiny new organisation without taking much notice of that strangely awkward man standing in the background. I hope Britain won’t regret a missed opportunity to avoid becoming a sleepy back-water.