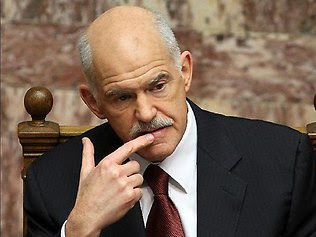 Some of his fellow countrymen sneeringly call him Jeffrey because he was educated in America and doesn’t look a bit like Aristotle Onassis or the more usual type of the powerful modern Greek oligarch. George Papandreou,  the much put upon Greek Prime Minister is a small man with a lot of enemies. if I were looking for a nickname for him I wouldn’t call him Jeffrey, David is more appropriate. Not David, as in our Dave, the confused but optimistic British Prime Minister, but more like the boy David, the slayer of the giant Goliath. This new David may not actually kill the twin-Janus-headed giant that is Europe’s centre of power, the self-hating Merkel-Sarkozy monster. Poor little George Papandreou, we all thought, he hadn’t got a chance – perilously vulnerable in his own parliament, criticised by his own people, mercilessly bullied by the Germans and the French and sneered at by the British Conservative Party, he has confounded us all with his bravery and charm with this sudden and unexpected call for a referendum that will ask the Greek people what they want. You know what, the so-called cradle of democracy is actually going to consult the people and listen to their voices and then act on their decision democratically. 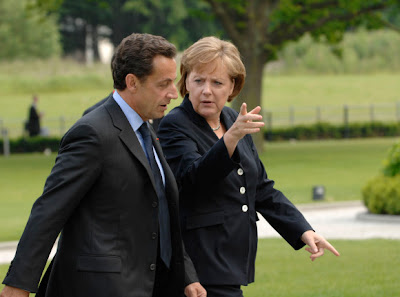 Ouch! thought Angela Merkel, ouch! thought Nicolas Sarkoy, we are meant to be running this show. So what’s going on?  thought David Cameron, no one ever tells me anything. Apparently, he found out in the end by watching the television news. 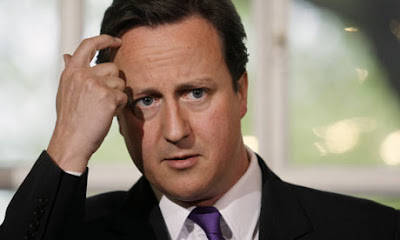 It appears that George Papandreou has done the only thing left for him to do, ignore his enemies at home and abroad and, if he survives, put his future into the hands of the people. It is up to the Greek population to decide if they want to remain in the Eurozone and bite the bullet of deficit austerity or hurtle their country into deeper chaos. A chaos, it has to be remembered, inflicted on them by the usual villains,  corrupt financiers and politicians that have been bleeding the country for decades. There will be no easy solution but,  call me old-fashioned,  I still like the idea of democracy even if it is now unfashionable in the higher echelons of the European Union.