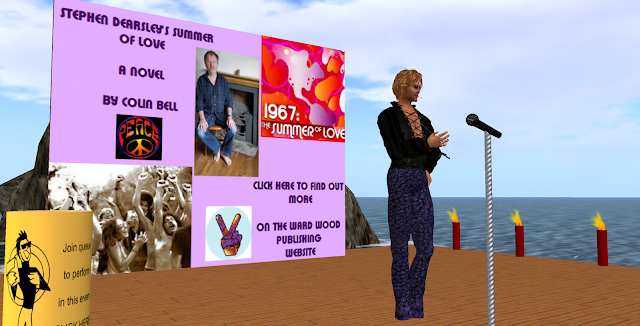 My novel is about to be published, the date is yet to be announced, but last night, ahead of its “Real World” launch it was launched in the virtual world of Second Life which is also a virtual haven for writing and writers. Apparently I am the first novelist to be contracted by a publisher in this way – Ward Wood Publishing is breaking new ground here at a time when all the publishing rules are being rewritten.

I am told that my book, in its hardback edition and then in other media, will be available very soon but you can check on the details on the Ward Wood Publishing website

(see Links in the right hand column). It is called Stephen Dearsley’s Summer Of Love (credited to my real name, Colin Bell) and, let me admit this, I am very excited. 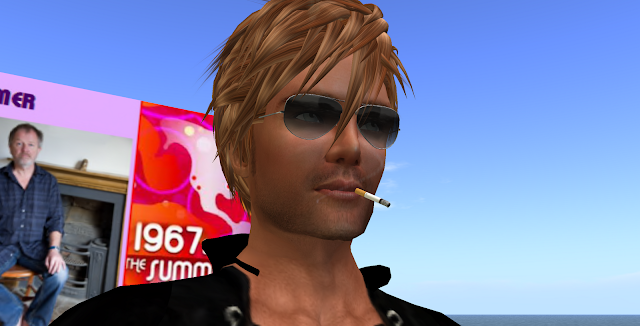 Whilst I was recovering from my brain haemorrhage, which I suffered three years ago this month, my animated avatar, who is also Wolfie, was much freer to mix in the outside world and he enabled me, here in “reality,” to stop going crazy confined to my house in Lewes. He is allowed to smoke too!

So after all the writing, the book is allowed out of its closet. It is a strange experience when a large writing project leaves the protected world of your own imagination for the broad bright light of the World.  I hope you all will be kind to it.

Last night was special though as it was not only a wonderful and well attended event but it was also the moment when my real and virtual selves got to meet in public. Thanks to everyone who turned up and supported me.

If you want to know what the novel is about, here is the publisher’s blurb:
It’s 1967 and the start of the Summer of Love. Life will never be the same again for the young as they celebrate liberation and nonconformity, but also protest against prejudice, repression and war. In Brighton, Stephen Dearsley is tempted and intimidated by the way his generation is casting off traditional ways of dress along with the old ways of thinking. His hippy housemate Dys provides an open door into his own possible summer of love, but will autumn still find him in tweeds, or will he be in colourful loons and tie-dye? His ambition to become a biographer is fulfilled when he’s commissioned to research the life story of Austin Randolph, and the revelations of hypocrisy, class prejudice and homophobia lead him to make his decision.
I shall keep you informed on its progress.
4
6th October 2011
4 Comments