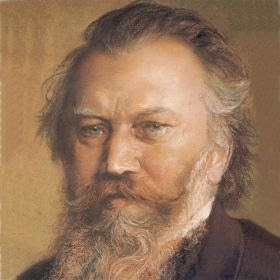 When, if, people think of the composer Brahms, they remember the man with the big bushy beard. He looks jovial enough here but maybe those eyes are a mismatch for Santa Claus – they are much too searching and sad. It is as if he is actually hiding behind his beard as Jan Swafford observes in his definitive book on the composer (Johannes Brahms, A Biography. Vintage ISBN: 0-679-74582-3). It is also true that you can see here the man who enjoyed his tankard(s) of good German beer with his friends.

Brahms is capable in his music of a similar mix of joy and sorrow.

I have been playing my way through the history of Classical music for some years now, as I have mentioned on these pages before, and I have been stuck in 1873 throughout the Summer alighting on the final work on my list just as I have, it seems, entered a new phase in my life.

New phases are a mix of the good and the bad, the exciting and the disturbing, the joyful and the sad and, yes, not just the new but the old too. Brahms is just the man to see me through this time.

My progress has taken me through music from the early church composers who first added ornamental lines to Gregorian chants, musicians call it counterpoint, to the great Renaissance composers who brought the style to a kind of perfection and then to the genius of J.S. Bach who took their ideas of independent melodic lines intermingling precisely, emotionally and beautifully onto an unimagined level of inspiration – finding novelty in what was by then a time-worn tradition. It was an exciting experience coming to Bach and all these composers in the strict order of time.

Bach may have become unfashionable in smart circles in the late 18th. Century but his music survived as an inspiration for the great composers who followed in the so-called Classical Period of Haydn, Mozart and Beethoven who, not always far from the surface, show their formal indebtedness to Bach and to everything that he passed on from his predecessors right back to those early writers of counterpoint.

It is there too after Beethoven’s death, hidden from view maybe, in the intricate piano music of Chopin and, more obviously in the organ and choral music of that great Bach “revivalist” Mendelssohn. The 19th. Century’s struggle to come up with something new after Beethoven gave us the fallible glories of Berlioz and Wagner but came to its natural conclusion with the final coming of age of Johannes Brahms.

Brahms, like me but with much more profundity, studied, to the point of nerdiness, the history of music even those aspects of it that were left dumped in libraries’ forgotten basements during an era when the new was the only thing worthy of attention.

Oddly, it seems to me, it was the man who spent such a long time in his lengthy development as a composer studying the past, who came to be seen as also the beginning of a new age in music after we grew to see Wagner as a wonderful but distracting byway in the long development of classical music with its mix of form and feeling.

It is Brahms who leads us to Mahler and beyond into the toughly exciting music of the 20th. Century and it was to Brahms that I turn in times when the old makes way for the new.

It was highly appropriate then that the incidental music to my last few weeks has been Brahms’ Variations On A Theme By Haydn – a piece that marked the beginning of the greatest period of his life as a composer with its new mastery of the orchestra, complexity of form and subtlety in the art of variation writing and where he was to find a happy marriage of the old with the new. It is, amongst other things,  his testament of thanks to the many composers who built the road that brought him finally to join their ranks on the top level of European musical art.

I have never been good at simply celebrating the good or just mourning the bad – we are a mixture of moods even in the best of times so what better way to celebrate this new time in my life than with the multi-coloured variations and especially the towering Passacaglia final movement of the Brahms’ Haydn Variations (which, incidentally, historians have decided is not by Haydn at all) where an unvaried set of notes in the bass supports what is at times an almost hysterical mix of mood, colour and rhythm above it.  The Passacaglia, of course, being used in a thrillingly modern way but also as homage to the last great composer to write one, Johan Sebastian Bach. If you keep your concentration going with the bass-line, Brahms carries you away to possibilities beyond your imagination in a piece that demonstrates that we can only really reach new heights once we are grounded in understanding who we really are.

I am sometimes tempted to give up my progress through music in such a precise chronological order but then at moments like this, you can, I think, just for a moment, get a feel for those great moments in music when the future grows out of the past right in front of your ears.

Here is that passacaglia played by the London Philharmonic Orchestra conducted by Adrian Boult  but you really need to hear the whole thing: